THE RIPPING FRIENDS
(FOX, September 22, 2001-January 26, 2002)
Spümcø, Cambium Entertainment
MAIN CAST:
Harvey Atkin & Mark Dailey – Crag, Indigestible Wad various
Merwin Mondesir – Slab
Michael Kerr – Chuck Nuggett
Mike MacDonald – Rip
John Kricfalusi – Jimmy the Idiot Boy, Citracett/Stinky Butt the Foul
The brothers consisted of their leader, Crag (Harvey Atkin at first, then Mark Dailey), his right-hand man, Slab (Merwin Mondesir), hotheaded Rip (modeled after Kirk Douglas in Detective Story, voiced by Mike MacDonald), and the childlike Chunk Nuggett (Michael Kerr, who was also a storyboard artist). They lived with their foster mother, the masculine He-Mom, and were assisted by Spümcø’s mascot Jimmy the Idiot Boy (John Kricfalusi), a mentally-challenged drooling kid created by combining the brothers’ DNA (Jimmy was actually the subject of his own show pitch, but Kricfalusi didn’t want to lose the rights to the character). Chunk was often the butt of his brothers’ jokes because he was the youngest at 35 ½, compared to the others being 36. The brothers’ only weakness was a lack of meat consumption, which would cause their muscles to shrink and leave them as frail wimps. Among the foes they faced were Citrocett (Kricfalusi), a Euroslavian dictator who once gained flatulence-based powers; Flathead (Marvin Goldhar), a worm whose acquisition of a spine allowed him to wreak havoc; the Indigestible Wad (Atkin), a sentient wad of gum that sucked moisture out of people and zombified them; and even their own underpants. The characters were designed by Kricfalusi and Jim Smith.
Before selling Ren & Stimpy, Kricfalusi was pitching a number of ideas to various studios and networks. While they claimed to like the ideas, they ultimately turned them down because they couldn’t see a way to get a toy company to finance the show’s production as they were only interested in action characters. Kricfalusi decided to give them what they wanted and came up with The Ripping Friends—which still didn’t sell. Even with the success of Ren & Stimpy, Kricfalusi didn’t abandon the idea and tried to get the concept turned into a film project with James Cameron attached, but that ultimately fell through. Finally, it was his partner Kevin Kolde who managed to put a deal together to get The Ripping Friends onto Fox Kids.
Kricfalusi wasn’t heavily involved with the production of the show early on, as he was busy working on the Flash-animated Weekend Pussy Hunt (which also featured Jimmy). However, halfway through production on the season Kricfalusi saw that supervisors were eliminating the Spümcø style (such as cleaning up intentionally “off-model” poses, with John Shaw of Funbag Animation famously leaving Kricfalusi’s style guide unopened for weeks), and got more actively involved. Not only did he serve as one of the writers along with Richard Pursel, Robyn Byrd and Ben Jones, but also as the design supervisory, storyboard supervisor, storyboard artist, key animator, director and voice director. On that last role, Kricfalusi stated in an interview that he worked his actors so hard he was afraid Atkin was going to have a heart attack, resulting in his being replaced with Dailey for half of the episodes. Kricfalusi was also at constant odds with the network, which forced him to tone down the more adult aspects of the show and some of the violence after he felt he already “watered down” the concept enough just so it would sell (he had hopes of a more prime-time timeslot for future seasons).
The Ripping Friends was originally supposed to debut in September of 2000 and then in May of 2001, but ended up coming to FOX on September 22, 2001. The series’ theme and music were composed by Steve London, with additional music by Ernest Lee and Zoran Borisavljevic. Along with Funbag, animation duties were handled by Animagic Studio, PIP Animation Services Inc., Q-West Studios and Red Rover Studios (now part of House of Cool). Kricfalusi made special point to give a shoutout to Sound of One Hand, a small audio studio that allowed him to go full experimental with the sound design of the episodes. Along with the main story, each episode featured a short segment called “Rip Along with the Ripping Friends”, where viewers were asked to send in letters about problems they were having (such as why toys no longer came in cereal boxes) and the Ripping Friends “ripping” the offenders to shreds. Viewers were encouraged to participate by ripping pieces of paper in front of the TV screen when told to. These satirical segments were intended to be an homage to classic cartoons and make use of previously produced footage so greater focus could be placed on the actual episode; however, the intent was lost on the animation studios who re-animated the footage anyway.
Because of when the show debuted, the episodes “The Infernal Wedding” and “Jimmy’s Kidnapped” never aired during its original run because the material was deemed offensive following the September 11 attacks. Additionally, a portion of one of the “Rip Along” segments was removed for its implied sexual nature. The segment dealt with the disparity between the number of hot dogs per package versus the number of buns, and featured a male hot dog slipping inside of a female bun (a possible inspiration for one of the gags in Sausage Party?).
With a $400,000 per episode price tag and a toy deal with Playmates never materializing beyond a prototype stage, the series was cancelled with only 13 episodes produced. In September of 2002, Cartoon Network’s Adult Swim picked up the series and aired it completely uncut. The series also aired occasionally on Teletoon in Canada, where it was produced, and briefly on the CNX channel in the United Kingdom and ABC in Australia. Creations Group Limited developed a video game for the Game Boy Advance with consultation from Kricfalusi that was published by THQ. Two VHS tapes containing two episodes each were released, and later combined into a single DVD. Madman Entertainment released the complete series to DVD in Australia.

EPISODE GUIDE:
“The Indigestible Wad” (9/15/01) – A wad of chewing gum gains sentience and wanders the town sucking the moisture out of people, turning them into zombies.
“The Infernal Wedding” (10/13/02) – Citracett decides to seduce He-Mom in order to get close enough to get rid of the Ripping Brothers.
“Flathead’s Revenge” (9/29/01) – A flatworm takes one of the brothers’ backbones and wreaks havoc on the town.
“Frictor” (10/6/01) – Crag tries to help get some friction in Jimmy’s smooth fingers, but when the brothers’ callouses are exposed to radiation they create Frictor, the master of friction.
“Rip’s Shorts” (10/13/01) – After being thrown into space, Rip’s shorts become evil and gain the ability to take control of anyone.
“The Ovulator” (10/27/01) – The only one not suffering from the beef shortage, Slag is sent out to solve the mystery of the missing beef and finds a chicken holding cows hostage.
“ManMan and BoyBoy” (11/10/01) – Crag decides to save BoyBoy from his “crimefighting” partner when it’s discovered their exploits are merely putting BoyBoy in danger.
“Stinky Butt” (11/17/01) – After being banished by the brothers to the nether regions of Earth, mystical energy gives Citracett the ability to control his flatulence.
“The Muscle Magician” (11/24/01) – Being made fun of for being younger, Chunk runs away to join a circus that ends up having a magician that can control muscles.
“Jimmy’s Kidnapped” (12/15/02) – When Rip causes Jimmy to run away, Citracett and his gorilla friend capture him.
“Dr. Jean Poole” (1/12/02) – He-Mom gives the brothers a lesson on girls and sets them all up on a date with Dr. Jean Poole.
“The Man from Next Thursday, Part One” (1/19/02) – A time traveler breaks into RIPCOT’s vault to steal the brothers’ “perfect” DNA to make a weapon to use against them.
“The Man from Next Thursday, Part Two” (1/26/02) – The time traveler’s plot revealed: he seeks revenge for the brothers ripping the nail off his giant thumb and putting it back on the wrong side. 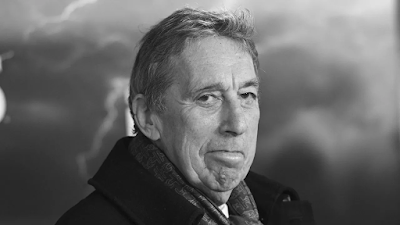 A prolific comedic director and producer who will probably be best remembered for the original two Ghostbusters films. Along with filmmaking, he served as a creative consultant on The Real Ghostbusters and an executive producer on both Alienators: Evolution Continues, which was spun-off of his film Evolution, and Beethoven: The Animated Series, which stemmed from the first two entries in the Beethoven franchise that he produced.

Posted by Chris Buchner at 12:39 PM No comments: