THE HISTORY OF CASPER 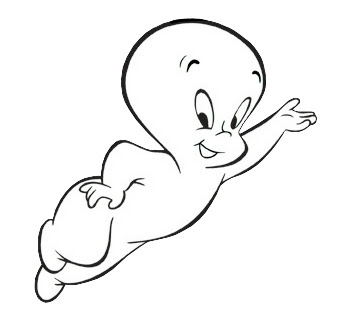 We all know ghosts are supposed to be scary. But, Seymour Reit and Joe Oriolo decided to test that belief in the 1930s when together they created Casper, the friendly ghost. Originally intended as a 1939 children’s storybook, there was little interest in the idea until Oriolo sold the rights to Paramount Pictures’ Famous Studios animation division.

Released under their Noveltoon banner, the first Casper short appeared in 1945 titled The Friendly Ghost. For the short, Casper was altered to be more child-like and given a New York accent. He resided in a haunted house with a community of adult ghosts who loved nothing more than to scare people. Casper, however, would rather make friends and struck out on his own to find some. Unfortunately, everyone he encountered was frightened off by the fact he was a ghost, a running theme in Casper cartoons. Two more Noveltoons were released until Casper gained his own series of shorts in 1950, again with a slight redesign to be thinner. Until 1959, Casper’s shorts followed the same plot of his initially scaring off people he wanted to befriend and later earning their acceptance after saving his potential friend somehow. In 1955, Casper gained a theme by Mack David and Jerry Livingston.

With the immense popularity of the shorts, Casper soon expanded into comic books. Initially, his adventures were published by St. John Publications in 1949, where he officially received his name, until moving to Harvey Comics in 1952. The Harvey comics presented a new version of Casper, one who resided in the Enchanted Forest with friends Wendy the Good Little Witch, Nightmare the talking horse, derby-wearing tough guy ghost Spooky and Spooky’s girlfriend Poil. Casper was given antagonists in The Ghostly Trio; three mischievous ghosts who were Casper’s opposites in every way.

In 1959, Harvey founder Alfred Harvey purchased the character rights outright, along with several other Famous properties. U.M. &M TV Corp had already purchased the rights to the early Casper shorts, but the post 1950 shorts began airing on the Mattel-sponsored Matty’s Funday Funnies on ABC on Sundays. In the 1960s, Harvey contracted Paramount to bring new Casper cartoons to television, however based on the Harvey version.
Posted by Chris Buchner at 8:00 AM