In the early days of space travel, NASA was looking into alternative means of giving astronauts sustenance in a more appetizing form than protein paste in tubes. They turned to the freeze-drying process—a process that removed water from foods after freezing and lowering the air pressure around them. One of the food items they experimented with was ice cream, developed by the Whirlpool Corporation for the Apollo missions. However, freeze-dried ice cream wasn’t popular, being described by astronaut Mike Massimino as “more closely related to a building material than food.” Despite aggressive marketing campaigns declaring it “astronaut food” and feeding into kids’ imaginations of going to space one day, it never actually went to space on any missions. Eventually, actual freezers found their way up, meaning astronauts could enjoy regular ice cream. 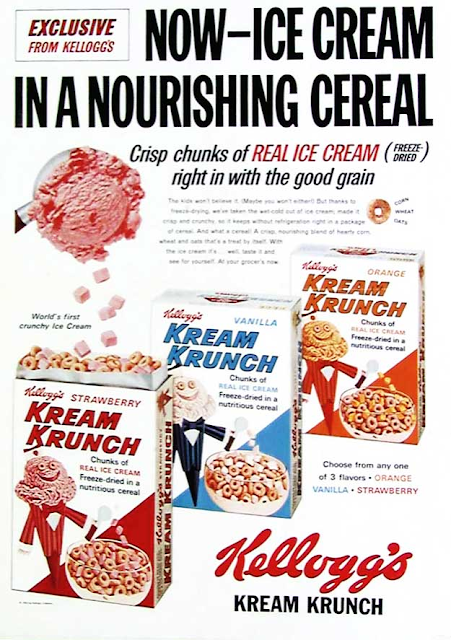 Not one to miss out on a trend, Kellogg’s decided to get in on the freeze-dried ice cream game. In 1965, they introduced Kellogg’s Kream Krunch cereal. The cereal had standard round cereal pieces, but the selling point was that they were mixed in with chunks of freeze-dried ice cream. It came in three varieties: vanilla, orange and strawberry, with the anthropomorphic ice cream cone soda jerk mascot changing colors to match the variety. The cereal barely lasted a year, however. Apparently, the ice cream bits would melt into a gross, sticky goo after being in milk for a few minutes. Kids wouldn’t finish their bowls, let alone the box, and parents complained. There’s also the notion that Kellogg’s infringed on the patent for freeze-drying, resulting in its being discontinued.