NOT QUITE TODAY IN SEPTEMBER 1952

It's September, so that means new television season! However, in the 1950s, things started in October. But, for the sake of what we're doing here, we're giving them to you today. So these are the Saturday Morning schedules that debuted in 1952. 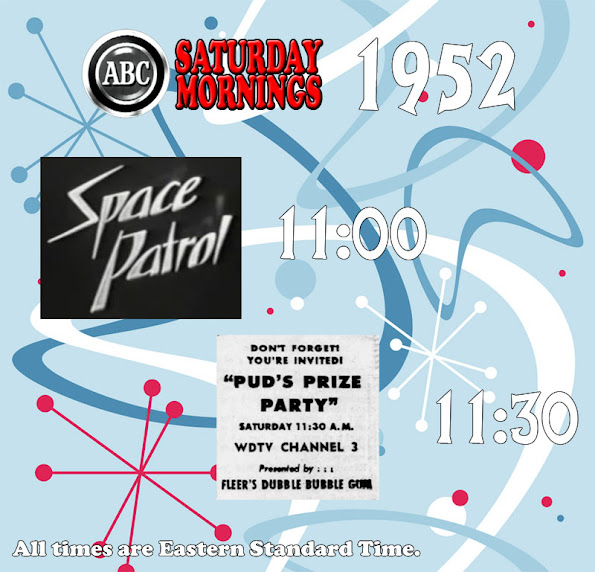 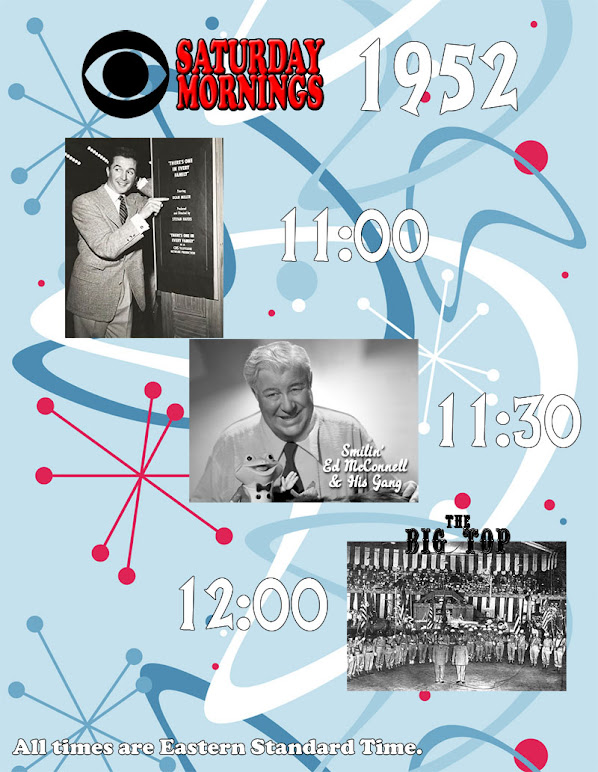 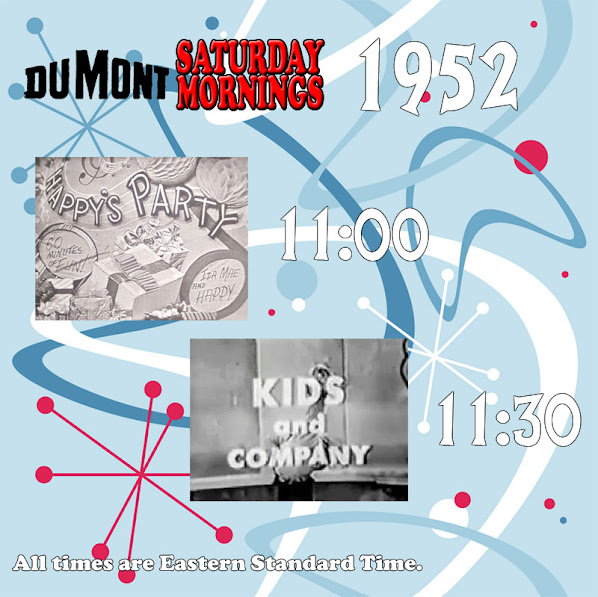 It's September, so that means new television season! These are the Saturday Morning schedules that debuted today in 1962. 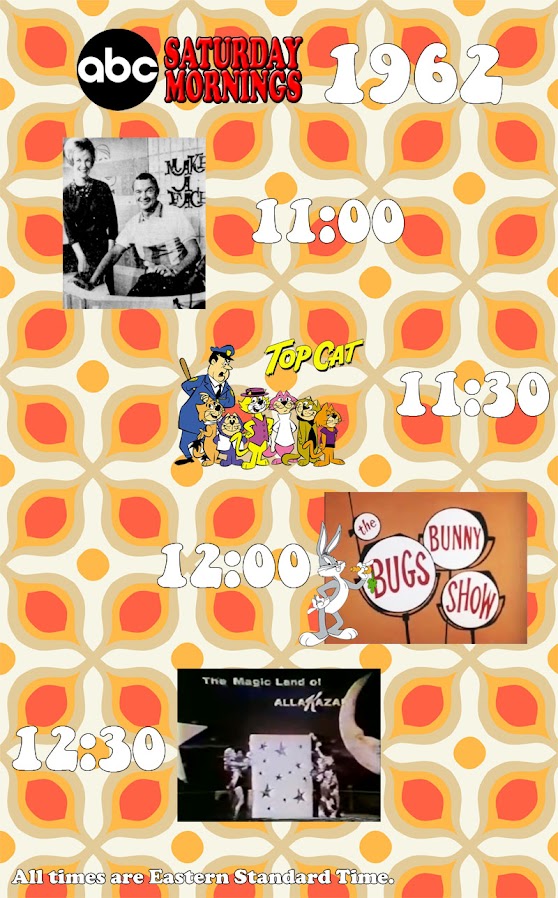 EPISODE GUIDE:
Sabrina segments:
“The Fairy Godmother / Hiccups” (9/13/69) – Sabrina uses magic to get Spencer to take Ophelia to the school dance. / Sabrina’s hiccups causes her magic to go out of control.
“Which Witch is Which? / The Basketball Game” (9/20/69) – A magical mishap causes Hilda to get Sabrina’s face. / Sabrina attempts to use magic to stifle the opposing team’s cheating during a basketball game.
“Will the Real Weatherbee Stand Up? / Caveman” (9/27/69) – When the school ends up short-staffed, Sabrina duplicates Mr. Weatherbee to help out. / Attempting to help Sabrina with her history homework causes Ambrose to bring a caveman into the present.
“Paint Story / Aunt Zelda’s Broom” (10/4/69) – Sabrina joins the others in painting Mr. Weatherbee’s house. / Sabrina tries to get Zelda her broom for a race in the other world.
“Cinderella Story / What the Hex is Going On?” (10/11/69) – Sabrina’s magic goes wild during the costume ball. / Hilda hexes Jughead after he speaks ill about witches.
“Wishbone / Babysitter” (10/18/69) – Hot Dog Jr. and Chili Dog find a magic soup bone that grants wishes. / Sabrina has to babysit Della’s wicked nephew, Hexter.
“Carnival / Stage Fright” (10/25/69) – A comet passes by overhead that causes everything a witch does to be backwards. / Hilda lands the role of a witch in a play.
“Pet Show / Funny Bunny” (11/1/69) – Sabrina enters Salem in a pet show just as a cosmic constellation occurs that causes witches’ cats to be rambunctious. / Sabrina tries to help Jughead be successful, but instead turns him into a rabbit.
“Hair Today, Gone Tomorrow / A Witch in Time” (11/8/69) – Sabrina tries to change Mr. Weatherbee’s mind about people with long hair. / Della decides Hilda and Zelda aren’t witch enough to watch over Sabrina and assigns her a new guardian.
“When the Cat’s Away / Costume Party” (11/15/69) – Sabrina and Salem trade places. / Sabrina realizes the gang is holding their costume party at the home of the Witches’ Convention.
“Let’s Have a Hand for Jughead / The New Freeway” (11/22/69) – Sabrina tries to help Big Ethel attract Jughead. / The Spellmans must save their house from the construction of a new freeway.
“Blue Whale / Football Game” (11/29/69) – At the aquarium, Hexter decides to help out a homesick whale. / Hilda attends the school football game and unwittingly helps the opposing team win.
“Town Beautiful / Horse’s Mouth” (12/6/69) – A pair of bikers undermine the gang’s efforts at beautifying the town. / Sabrina grants a horse the gift of speech to help get a law changed.
“Birdman of Riverdale / Hoedown Showdown” (12/13/69) – Sabrina learns some secrets about a grumpy old man. / The gang helps Moose’s uncle with his harvest so he won’t lose the farm.
“Spooky Spokes / You Oughta Be in Pictures” (12/20/69) – Sabrina accidentally gives away Ambrose’s motorcycle and tries to get it back. / Sabrina helps the gang with their movie.
“The Generation Flap / School Daze” (12/27/69) – Sabrina arranges a birthday party for Archie on the same night her aunts arranged a magic seminar. / Hexter goes to Riverdale High after shrinking Sabrina down to doll size.
“Ug at the Bat / Computerized Moose” (1/3/70) – Hilda makes Sabrina take the caveman to school where he turns out to be a natural batter in baseball. / Moose becomes super-intelligent after an accident with the school’s computer.
Special:
“Archie and His New Pals” (9/14/69) – Sabrina starts at Riverdale High just as a heated election is about to begin between Reggie and Moose for class president.
Posted by Chris Buchner at 8:00 AM No comments:

It's September, so that means new television season! These are the Saturday Morning schedules that debuted today in 1982 (ABC's actually debuted the following week).

From 1996-99, Scholastic published a series of books adapted from episodes of the show. Additionally, they also made four “Fun Kits”, which were activity books accompanied by cassettes featuring episode audio tracks and narration by Tony Sperry. As mentioned earlier, Microsoft published a number of games based on a combination of the books and show through their Microsoft Home brand from 1994-99; developed initially by Music Pen and later KnowWonder. While Tina Marie Goff voiced Miss Frizzle in the games, the cast from the show was retained for the students through 1997’s Explores the Rainforest. Between 1995-2002, numerous episodes were released onto VHS by KidVision and later Warner Home Video. Warner would then release DVD collections containing 3 episodes each from 2002-05, with Scholastic releasing two of their own in 2006. New Video Group began re-releasing all of those DVDs with bonus episodes in 2012, with some getting a bonus book included, as well as new collections and the complete series. In 2017, a new collection called Greatest Original Episodes was released containing 7 episodes.

In 2017, a sequel series debuted called The Magic School Bus Rides Again. It was produced by 9 Story Media Group and aired on Netflix, with Lin-Manuel Miranda singing the theme. The series saw Miss Frizzle (full name revealed to be Valerie Felicity Frizzle), again voiced by Tomlin, get her Ph.D and retire from teaching. In doing so, she handed over her class, comprised of mostly the same kids with new actors (Phoebe was said to have gone back to her old school and she was replaced with a new character), and the Bus’s keys to her younger sister, Miss Fiona Felicity Frizzle (Kate McKinnon). The younger Frizzle continued her sister’s eccentric means of teaching the class via fanciful field trips courtesy of the Bus. Stuart Stone returned to the series as a producer and provided additional voices, as did Yamanaka and Crawley. Like the original series, it was a dual United States/Canadian production and original voice director Blu also returned to handle the Los Angeles-based talent while Alyson Court handled the ones in Toronto. The series ran for two seasons and three specials. As of 2020, a live-action film adaptation has been announced with Elizabeth Banks set to star and produce.