BIG WOLF ON CAMPUS
(YTV, Fox Family Channel/ABC Family Channel, April 2, 1999-April 27, 2002)
Telescene (season 1-2), CinéGroupe (season 3), Saban Entertainment
MAIN CAST:
Brandon Quinn – Thomas P. “Tommy” Dawkins
Danny Smith – Merton J. Dingle
Rachelle Lefevre – Stacey Hanson (season 1)
Aimée Castle – Lauren “Lori” Baxter (season 2-3)
Big Wolf on Campus was essentially an expansion of the concept seen in the 1985 film Teen Wolf with a mixture of Buffy the Vampire Slayer. However, unlike the film, Tommy hid his lycanthropy from everyone and seemed to possess his abilities when he wasn’t transformed; including super strength, increased speed and agility, rapid healing and enhanced senses. Tommy would come to be revealed as an aberration, as most werewolves succumb to the dark side of their curse that Tommy had somehow managed to repress (however, that dark side was still there and managed to be brought out by certain circumstances). Despite protecting the town from various creatures and entities such as blood bank-robbing vampires, a pack of evil werewolves, ghosts, a mummy, a cyclops and zombies, most people considered the werewolf as big or equal a threat. Further, Tommy often found his dates with Stacey being interrupted by his need to “wolf out”, leading her to think he was constantly ditching her. Stacey also ended up being targeted by some of those entities who found her just as appealing as Tommy.
Other characters included Tommy’s family: His father, Bob (Alan Fawcett), the mayor of Pleasantville and the biggest proponent for taking the werewolf down, his mother, Sally (Jane Wheeler), a local reporter, and his brother, Dean (Jack Mosshammer), a couch potato who never left his chair (although his television knowledge came in handy at times); Merton’s family, although only his sister, Becky (Natalie Vansier), was ever seen and was embarrassed to be related to him; Tim (Domenic Di Rosa) and Travis (Rob deLeeuw) Eckert, two dimwitted bullies that dubbed themselves “TNT” and dedicated themselves to finding the Pleasantville Werewolf; and Hugo Bostwick (Richard Jutras), the overzealous security guard of the high school. Tommy and Merton would frequently meet in Merton’s basement, which he converted to his “lair” containing all of his accumulated occult items and various screenplays he was working on. They would also hang out at The Factory, a teen hangout where kids could dance, bowl and eat.
Big Wolf on Campus aired on YTV in Canada and Fox Family Channel in the United States, debuting on April 2, 1999 and running for a total of 3 seasons. The show was created by Peter Knight and Christopher Briggs, who after a successful stint writing for Sweet Valley High and Breaker High decided to approach Saban Entertainment with some show ideas for their impending takeover of The Family Channel. Due to its similarity to Teen Wolf, Saban actually contemplated just securing the rights to the film and its characters, but ultimately settled for the cheaper option of just making their own original interpretation. To further save money, the production was filmed in Canada, to take advantage of various incentives Canada offered. It was produced by Telescene, and then CinéGroupe when the former went bankrupt. Knight and Briggs served as creative consultants, producers and wrote several episodes; however, Briggs would depart during the first season over frustration with the power struggles behind the scenes as they found themselves constantly being undermined because of their comparative youth and perceived inexperience. Briggs would return as a consultant and writer for the third season.
Other writers included Gregory Thompson, Aron Abrams, Dan Kopelman, Michael MacKenzie, Dana Reston, Michael Shipley, Jim Bernstein, Rick Nyholm, Kirk Savell, Jonathan Goldstein, Joseph Mallozzi, Paul Mullie, Jeff Rothpan, David Hamburg, Mitchell Goldsmith, Ari Posner, Rick Parks, Scott Jackson, Sam Wendel, Robert L. Baird, Kelly Senecal, Michael Bornhorst, David Feeney, Brian Gewirtz, Arnold Rudnick, Rich Hosek, Barry Julien, David Wolkove, Sandy Brown, Pang-Ni Landrum, Maggie Bandur, Matthew Salsberg, Michael Benson, Marc Abrams, Beth Seriff, Geoff Tarson, Lars Guignard, Ron Nelson and Louis Pearson. Baird and Senecal served as story editors for season 2 with Salsberg taking over in season 3, and Julien as executive story editor. The series’ music was composed by James Gelfand in season 1 and Simon Carpenter for the remainder. The theme was written and performed by Smith with arrangement by Robert Marcel Lepage, which was then rearranged from season 2 onwards by Carpenter. Most of the series’ episode titles were puns or parodies of film titles.
Three episodes into the series, Tommy’s werewolf appearance was changed as Quinn proved to be allergic to the glue used. He went from having a wolf-like face with scraggly hair and pointy ears to just having the ears, fangs, and more hair that expanded to his face in mutton chops leading to an incomplete mustache. This look would come to be enhanced and refined as the series went on. The special make-up effects were done by Twins F/X 11 Inc., Erik Gosselin, Karl Gosselin, Marie-France Guy, Marti Jutras, Frédérick Guilbert, Pascal Hérbert and Caroline Aquin. Special effects were rendered by Big Bang Animation (1997) Inc. for the first two seasons, Covitec for the third.
Stacey was written out of the show after the first season as having gone off to college early. This was done because Knight felt that the character was poorly fleshed out and needed a reset. This allowed him to add Lori Baxter (Aimée Castle), a transfer from Pleasantville Catholic school who was kicked out for vandalism when helping Tommy and Merton deal with a ghost of a football star destroyed a tribute to him. She became the second person to know about Tommy’s secret, as well as his on again/off again girlfriend (they often found being together was distracting from their mission, and while Tommy wanted to stop working together, she wanted to end the relationship to keep up the fight). As a trained kickboxer, she often helped him battle the bad guys. Additionally, the characters of Hugo and Tommy’s parents largely disappeared due to budgetary constraints and wanting to focus more on the essential characters. 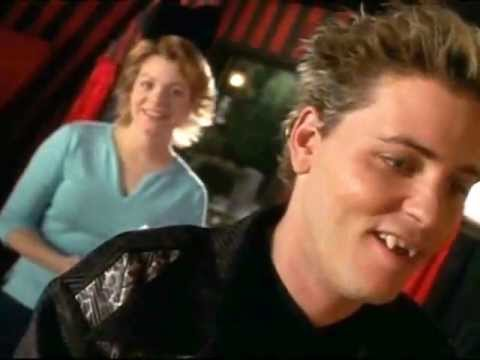