However, over on Saturday mornings, things on planet Mobius in the 33rd Century weren’t quite as cheery. Created by Len Janson in response to ABC’s passing of Adventures, the simply titled Sonic the Hedgehog (affectionately dubbed Sonic SatAM by fans to distinguish it from the other show) focused on the battle against Dr. Julian Robotnik  (Jim Cummings, who was also originally cast in Adventures) in a much darker setting. Having conquered Mobius by overthrowing King Maximillian Acorn (Tim Curry), Robotnik sought to remove all natural elements from the planet from his home base of Robotropolis (formerly Mobotropolis)--an industrial city comprised of his many factories and populated by his various robots; including his personal army, the SWATbots (voiced by various members of the cast).

Sonic (again White, with his younger self portrayed by Tahj Mowry) and Tails (Bradley Pierce) were now members of an all-new group of fellow animals known as the Freedom Fighters. Joining them were Sally Acorn (Kath Soucie), Princess of Mobius, leader of the Freedom Fighters, and Sonic’s love interest who sought to free her people and find her father; Nicole (also Soucie), a highly advanced A.I. housed in a portable computer Sally carried; Bunnie Rabbot (Christine Cavanaugh), a rabbit with a southern accent who was rescued from roboticization after half of her body was already transformed; Antoine Depardieu (Rob Paulsen), a French coyote who was clumsy, cowardly and arrogant and saw himself as Sonic’s rival for Sally’s affections; and Rotor (Mark Ballou & Cam Brainard), a walrus who served as the Fighters’ mechanic and invented various gadgets. In a contrast to Robotropolis, the Freedom Fighters lived in Knothole Village located in the Great Forest. The power rings that Sonic would collect for extra lives and vitality in his games were incorporated into the show as being able to give Sonic an extra burst of speed when held. They were magically formed at specific times from a pool near the village. 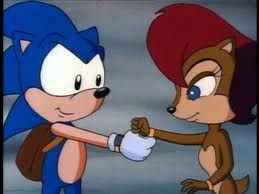 After the first season, ABC asked for some changes to be made to the show to soften up its tone a bit. As a result, several episodes of the season were strictly humorous while the darker overall subplot and violence were dramatically toned down. Dulcy (Cree Summer), a clumsy, loud-mouthed dragon with super breath was added to the cast as both a source of comic relief and transportation for the Freedom Fighters. Robotnik’s voice was no longer digitally altered to be more menacing, and his intimidation factor was reduced by turning him into a more incompetent foe. Sonic’s ego and childish antics, as well as Antoine’s clumsiness and cowardice, were increased and exaggerated. Sally was given a new vest to wear so that she would appear less naked to parents concerned about her fairly human-looking anatomy. Bunnie’s upper arm was no longer roboticized and Rotor received new coloring, as well as a reduced role in the series and a new voice actor as Ballou opted not to return for the second season. The creation of the Power Rings was also punched up to be visually flashier.
A third season was planned, which would have featured Snively as the primary villain after the fall of Robotnik alongside the evil wizard Ixis Naugus (Michael Bell), as well as further development for the characters and their interactions. However, the show was cancelled by the end of the second season due to declining ratings. Several factors went against the show at that time: it had been constantly pre-empted in the United States for other programming, it was competing against more popular shows like FOX’s Power Rangers franchise, and the new incoming president of ABC had no investment in the show to overlook the ratings and chance another season. Hurst and his writing partner Allee had lobbied unsuccessfully for many years after the cancellation to get the third season produced, or at least a movie incorporating those elements to close out the series in a satisfying manner. DiC Entertainment would go on to produce a third and final Sonic cartoon called Sonic Underground, which introduced siblings for Sonic (all voiced by White) as a royal family seeking out their mother to fulfill a prophecy and save Mobius from Dr. Robotnik (Gary Chalk). It lasted a single syndicated season of 40 episodes. 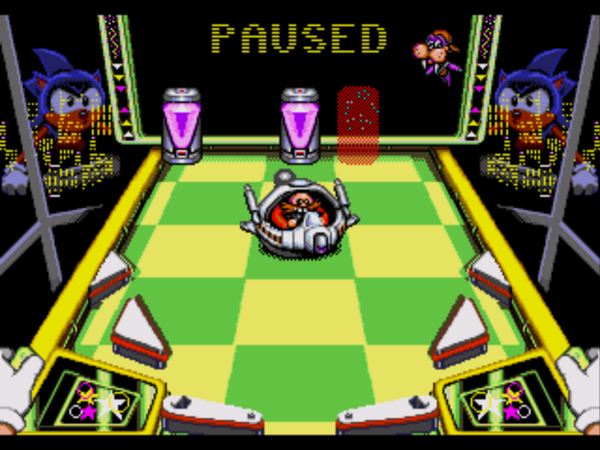 Before its cancellation, Sega had planned to integrate elements from the show, such as its characters, into future Sonic video games. Only Sonic Spinball, which put Sonic in a pinball game-like setting, ended up using those characters. Other games, Sonic-16 and Sonic Mars, were in development but were ultimately cancelled. Princess Sally did make one last animated appearance, sans dialogue, in the aforementioned Adventures Christmas special.

SatAM was adapted into a series of books by Troll Communications and Golden Books, as well as part of Publications International’s Look & Find series. Only one of the Troll books, Friend or Foe?, adapted the episode “Game Guy” directly while the rest were original stories set in the same universe. Sally was the only other character from the show heavily featured on merchandise (particularly on items from Australia), appearing on pogs, stickers, shampoo bottles, as a water bottle, various Sega World products, and as a bendable figurine, amongst others.
The show’s premise and characters did live on long after show in another form. In 1992, Archie Comics entered into a deal with Sega to make a comic based on the show. Because the comic and the show were being produced concurrently, the Archie team worked off of the series bible and character sheets which often led to differences in the content between the show and comic. Originally debuting as a four-issue mini-series, Sonic the Hedgehog began the following year as an ongoing series. The comic initially featured a tone closer to that of Adventures and even used some of its characters, but after SatAM became evidently more popular the comic’s tone shifted towards more dramatic storytelling and the Adventures characters phased out. The Sonic comic became the longest-running video-game based comic, spawning several spin-off minis and ongoings with the wide array of characters created over the years; telling both original stories and adaptations of the various video games in the franchise. Just before the comic’s 25th anniversary and 300th issue, Archie lost the license to Sonic and the series was abruptly cancelled mid-story. IDW Publishing picked up the rights and began a new series in 2018 while retaining the final Archie scribe, Ian Flynn; however, none of the SatAM characters had been carried over.


After the show’s initial run, it returned to TV in 1997 as part of USA Network’s Action Extreme Team programming block, and in 2019 on Starz Encore Family as part of a two-hour block of classic cartoons. Beginning in 1994, Buena Vista Home Video released a series of VHS tapes featuring two episodes each from the series. In 2007, Shout! Factory released the complete series to DVD with additional special features, while Delta Home Entertainment released their own version in the UK (complete with a “SatAM Sonic” badge on the box). Delta also released several individual episode collections that year, while in 2008 NCircle Entertainment began doing the same in the United States (as well as releases from other Sonic cartoons).


“Heads or Tails” (12/11/93) – Sally sends Sonic to Robotropolis for supplies for their defense system against Robotnik, neither knowing Tails has tagged along.

“Sonic and Sally” (9/25/93) – Robotnik captures Sally and creates a robot duplicate to spy on the Freedom Fighters.