THE HISTORY OF SONIC THE HEDGEHOG. 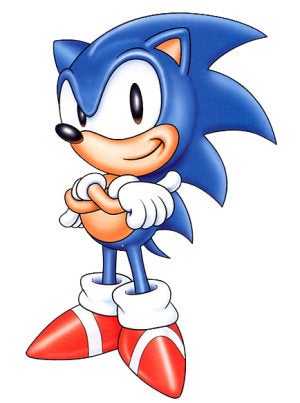 This week marked the 23rd anniversary of Sega's speedy hedgehog mascot, so it's only fitting I get down to business using him as a kick-off point. But, just who is Sonic and what led to his jumping out of the console and onto Saturday mornings?


In 1990, Sega was losing out to Nintendo in the video game wars. Nintendo's Super Mario Bros. franchise was as strong as ever, especially after the release of Super Mario Bros. 3. Despite the success Sega had porting their arcade titles to their new Genesis system, Sega needed a game that could not only show off what their new system could do, but could offer a character to officially replace Alex Kidd as their company mascot (which Kidd had been unofficially since his debut in 1986) and challenge Nintendo’s Mario.

Setting to work on that problem was Sega’s Sega AM8 team comprised of Yuji Naka, Naoto Ohshima, Hirokazu Yasuhara, and Manabu Kusunoki. Naka had created a demo featuring an algorithm he developed that allowed a sprite to move smoothly on a curve. The prototype involved a fast-moving character rolling in a ball through a long tube. The Sega AM8 team took this idea and developed a standard platformer around it, choosing to focus on emphasizing speed to both further differentiate it from Mario as well as allow players to complete the levels faster, since there was no game save mechanics in place at the time. They ran through a list of animals they could use for their main character looking for speedy ones that attacked in a ball form. Looking to increase the character’s threat profile, the team added the inclusion of spikes and the list ultimately became a choice between an armadillo and a hedgehog. After several designs, Ohshima’s spikey hedgehog was chosen as the character that would become Sonic. The armadillo would be recycled later into Mighty the Armadillo in the 1993 arcade game SegaSonic the Hedgehog.

Originally named Mr. Needlemouse, Sonic was colored blue after Sega’s logo and given boots inspired by the cover of Michael Jackson’s 1987 album Bad, but colored red to represent Santa Claus. Sonic’s personality was modeled after then-governor Bill Clinton’s “Get it done” attitude. He also lacked the ability to swim (unlike Mario) due to the production team's false assumption that hedgehogs couldn't. Initially, Sonic was given fangs and was part of a band with a human girlfriend named Madonna, but Sega of America softened the character for the American audience and removed those elements. Yasuhara fleshed out levels centered around Naka’s original demo in order to best make use of Sonic’s super speed.

Sega AM8 renamed themselves Sonic Team and created the first game called simply Sonic the Hedgehog, although Sonic himself would first appear in the racing game Rad Mobile as an air freshener. The core conflict of the series was derived from the growing battle between developers and environmentalists. Sonic’s objective was to rescue his fellow woodland friends from the clutches of the egg-shaped Dr. Ivo “Eggman” Robotnik, who seeks to capture them all and turn them into robots, as well as retrieve the powerful Chaos Emeralds. Robotnik’s design was based off one of the rejected designs for Sonic, selected to make him easy enough for children to draw. Sonic relied on his speed and sharp quills to defeat Robotnik’s robots and traps, as well as collecting rings that would grant him additional lives and resistance to injury.

Released on June 23rd, 1991, Sonic the Hedgehog was met with rave reviews and fan reaction, spawning a sequel and eventually growing into its own video game franchise. Confident in their new mascot, Sega looked to expand the brand’s recognition by once again following in the footsteps of Nintendo and putting Sonic on TV. In 1993, two major events took place: Sonic became the first video game character to have a balloon in the annual Macy's Thanksgiving Day parade in New York City, and Sega teamed up with DiC Entertainment (who also handled Nintendo's various Mario cartoons, a couple of which will be discussed here) to bring Sonic to television in not one, but TWO animated series. And one of those was on Saturday morning.

For more on the early history of Sonic, you can check out this documentary.
Posted by Chris Buchner at 1:49 PM