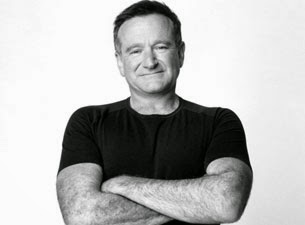 Although well-known for his various movies and manic comedic delivery, for Saturdays he provided the voice of one of his TV characters, the alien Mork, on the Mork & Mindy/Laverne & Shirley/Fonz Hour and was the originator of the role of the Genie in Disney's Aladdin franchise.
Posted by Chris Buchner at 7:02 PM