From the 1970s through the early 1980s, popular pieces of Americana included C.B. Radios, car chases, trucking, and an infatuation with Southern culture. Hollywood was quick to capitalize on this trend with projects such as Smokey and the Bandit, Convoy, Breaker! Breaker!, B.J. and the Bear and Every Which Way But Loose. One of these particular movies was Moonrunners, written and directed by Gy Waldron and based on the exploits of ex-moonshiner Jerry Rushing. The film was released in 1975 by United Artists and attracted the attention of Warner Bros. They approached Waldron about turning the movie into a TV series.

The resulting series was The Dukes of Hazzard, which utilized many of the same character and location names while toning down some of the cruder elements of the film. Dukes centered on the Duke family—cousins Bo (John Schneider), Luke (Tom Wopat), Daisy (Catherine Bach) and their uncle Jesse (Denver Pyle)—who lived in the fictional Georgia county of Hazzard. They were in the moonshine business until revenuers caught up to them and Jesse made an agreement to keep his boys out of jail by giving up moonshining. Now a family of farmers, the Dukes earned supplemental income from Daisy’s waitressing at the Boar’s Nest bar while Bo and Luke competed in local races with their seemingly indestructible car, the General Lee. Often, the Duke family found themselves at odds with corrupt county commissioner Jefferson Davis “J.D.” Hogg (Sorrell Booke), and his dimwitted brother-in-law, Sheriff Rosco P. Coltrane (James Best). Country singer Waylon Jennings was brought on to serve as the show’s balladeer as he had in the film, theme song composer, and uncredited script consultant to add an air of authenticity to them.

The Dukes of Hazzard debuted on CBS on January 26, 1979. Originally a mid-season replacement, only 9-episodes were ordered. The first five episodes were filmed on location around Georgia before production went on a Christmas break. Impressed by what they saw, Warner Bros. decided to order a full season’s worth of episodes and moved the production to their lot in Burbank, California to cut down on costs, simplify production, and enlist a larger workshop to produce Generals and police cars to replace ones destroyed by the many stunts in each episode. The Georgia episodes were also noticeably grittier and more adult in tone, closer to that of Moonrunners. Given the timeslot CBS aired the program, which was typically the time families tuned in, Best led the cast in a lobby for the show to become more family-friendly. As a result, the comedy element of each episode was increased and Boss and Rosco became more inept and softer villains.

The show proved immensely popular, ranking second only to the nighttime soap opera Dallas which followed it. The show became so big that by the start of the fifth season, Schneider and Wopat entered into a contract dispute over their salaries and merchandising royalties they felt were owed them. The studio refused their demands and they walked off the show (Bach also felt this way, but she was convinced that her leaving as well would likely result in the show just being outright cancelled). Believing the real star of the show was the General Lee and the impossible stunts it did, Warner Bros. recast their roles with lookalike actors. Bo and Luke were written out, said to be racing on the NASCAR circuit, and replacing them were new Duke cousins Coy (Byron Cherry) and Vance (Christopher Mayer) to help watch over things in Hazzard.

The rest of the cast, Waldron, and fans did not take to the change well. Coy and Vance, rather than being made their own characters, were fundamentally carbon copies of Bo and Luke. Helping that perception was the fact that scripts had Bo and Luke’s names scratched out and their replacements’ penciled in. The ratings sank, forcing Warner Bros. to renegotiate with Wopat and Schneider. Ultimately, a deal was struck and they returned before the end of the season. Bo and Luke thanked Coy and Vance and the latter pair drove off to be largely forgotten within the show.

It was during this tumultuous time that Warner Bros. was looking to further expand and diversify the Dukes franchise. With the toys selling well, they decided to attract even more of the child audience by commissioning a Saturday morning cartoon. Partnering with Hanna-Barbera, The Dukes hit Saturday morning airwaves. The cartoon featured Coy, Vance and Daisy in a race against Boss Hogg, Rosco and Rosco’s dog, Flash (Frank Welker), around the world for prize money they needed to save their farm from Boss. Because it was a cartoon, the General (Welker) was able to do a lot more in terms of stunts and contained an array of gadgetry, as well as some semblance of a personality. Each episode was told in flashback via a postcard Uncle Jesse read to his new pet racoon, Smokey (also Welker), back on the farm in Hazzard. All of the live-action stars reprised their roles for the series. 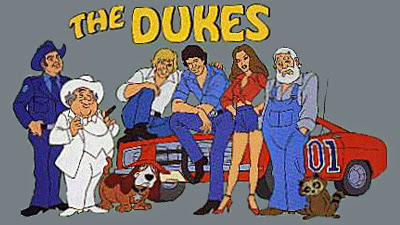 The Dukes debuted on February 5, 1983, likely due to the 1982 animators strike causing a delay in its production. The series was written by John Bradford, Benny Ferman, Clive Ferman, O. Gordy, John Graham, Orville Hampton, Tom Ruegger and David R. Toddman, with Ray Parker serving as story editor. Characters were designed by Floro Dery, Curtis Cim, Jesse Santos, Mel Keefer and Gabriel Hoyos, with music by Hoyt Curtin and Paul DeKorte. When the series was renewed for a second season, Schneider and Wopat were brought in and their character models were used to replace Coy and Vance. Unfortunately, the series was cancelled at the end of the season meaning the real Duke boys only got to appear in a mere seven episodes. In 2011, Warner Archive released the complete series to DVD as part of their Hanna-Barbera Classics Collection.

Despite the return of Bo and Luke, The Dukes of Hazzard never reclaimed its former glory; aided in part by increasingly inferior and formulaic scripts and cost-cutting measures of using models for many of the increasingly absurd stunts. With ratings plummeting, the show was cancelled at the end of its seventh season. The legacy of the show would live on, however. The cast reunited for two reunion movies and several video games. There have been annual conventions attended by members of the cast and many replicas of the cars, as well as Cooter’s Place, a museum and store in Tennessee dedicated to the Dukes run by Ben Jones (Cooter Davenport). In 2005, Warner Bros. attempted to relaunch the franchise with a feature film and potential series pilot television movie. While Warner Bros. has continually produced merchandise related to the show and the show itself has been seen on streaming services, debate about the symbolism of the Confederate battle flag (which adorned the General Lee’s roof and front license plate) has caused Warner Bros. to reconsider its use on Dukes products going forward and even the very airing of the program.


Season 1:
“Put Up Your Dukes!” (2/5/83) – The Dukes race Boss Hogg and Rosco around the world, their first stop taking them to Australia to visit a Duke who is a boxer.

“The Dukes in Venice” (2/19/83) – The Dukes recover the General Lee from robbers who used it to escape the law, but Boss uses the incident to frame the Dukes for the crime.

“Morocco Bound” (2/26/83) – A series of mix-ups allow Aladdin’s lamp to fall into Daisy’s hands, making her the target of the thief who originally stole it.

“The Secret Satellite” (3/5/83) – The racers head after a satellite that crashed in the Arctic Circle, the Dukes doing so for their country and Boss for the hefty reward.

“The Dukes of London” (3/12/83) – Flash is accidentally mixed up with the Queen’s dog, Regina, and the Dukes get arrested for kidnapping when they wind up with Regina.

“The Greece Fleece” (3/19/83) – Boss uses a man named Big Nick to frame the Dukes while plotting to marry his daughter in order to receive a lot of money.

“The Dukes in Uzbekistan” (4/2/83) – The Dukes help an English archaeologist find her father who went missing looking for a diamond mine.

“The Dukes in Scotland” (4/16/83) – Billy Bob and June Stewart from Hazzard have inherited a haunted castle.

“The Dukes Do Paris” (4/23/83) – A man gives a rare stamp to Daisy, whom he believes is working for Boss, putting the Dukes in trouble with the law.

“The Dukes Do Switzerland” (4/30/83) – An inventor and his daughter seek to protect their gas formula from the Slavonia Secret Police, only to have it stolen by Boss and Rosco.


“Boss O’ Hogg and the Little People” (9/17/83) – Boss and Rosco steal gold from leprechauns and the Dukes have to save them from being thrown over the rainbow.

“The Tales of Vienna Hoods” (9/24/83) – Thieves kidnap the Dukes and Boss’ niece Cindy Sue for a million dollar ransom.

“A Dickens of a Christmas” (10/8/83) – Boss attempts to break the rules and continue the race on Christmas, sending him into his own “A Christmas Carol.”

“The Canadian Caper” (10/15/83) – Boss buys illegal furs from the Bouchard Brothers, who capture animal-loving Suzzette that the Dukes must rescue.

“The Dukes in Hollywood” (10/22/83) – The Dukes are hired as stunt drivers by a crooked producer who tricks Boss into investing in the film so he’ll be blamed when the payroll is stolen.

“A Hogg in the Foggy Bog” (10/29/83) – Jesse finds a treasure map and joins his kin in the Philippines to race Boss and Rosco in finding the treasure.