In 1984, Mike Bowling created a series of plush toys called Pound Puppies. The toys were dogs of varying colors with floppy ears and droopy eyes in both large and small sizes. They came in cardboard boxes designed to resemble a doghouse and had a heart-shaped emblem by their tails with the Pound Puppies logo in it. Originally distributed by Irwin Toy in Canada, Tonka soon acquired the license and introduced them to the United States market.

As their popularity grew, Hanna-Barbera was contracted to bring the concept to life with an animated special. Written by Tom Ruegger (who also wrote several episodes of the series) and directed by Alan Zaslove, The Pound Puppies debuted on ABC in October of 1985. The special introduced the anthropomorphized group of Pound Puppies dedicated to helping new puppies find loving homes out of a dog pound ala Hogan’s Heroes. The main crew consisted of Cooler (Dan Gilvezan, whose signature laugh was inspired by Eddie Murphy’s), a gray beagle/bloodhound mix in a blue and red jacket who led the Puppies with an outgoing and mellow personality based on the Fonz from Happy Days; The Nose (Joanne Worley using a Brooklyn accent), a boxer/bloodhound mix whose super sniffer could sniff out anything; Howler (Frank Welker), a pug/Jack Russell terrier mix who was the team’s genius inventor, wore a derby full of gadgets and spoke only by howling; and Bright Eyes (Adrienne Alexander), a Labrador retriever who was the youngest of the group and named for her bright blue eyes. The special focused on the Puppies helping a rich dog named Violet Vanderfeller (Gail Matthius) get back home after she’s thrown into the pound while trying to escape dognappers.

The special did so well that, with the continued popularity of the toys, it was ordered into a series for the following year. Hanna-Barbera expanded on the concept they developed for the special while also making some changes both visually and with the voice cast. Cooler’s fur became white; The Nose became southern belle Nose Marie (Ruth Buzzi), whose mannerisms were modeled after Scarlet O’Hara from Gone With the Wind; the color of Howler’s clothing was changed and he was given actual dialogue provided by Robert Morse (although he still tended to howl to recover from when he had trouble relaying what he was trying to say); and Bright Eyes (Nancy Cartwright, impersonating Mae Questel) received a new face and yellow fur. Joining their crew was the new youngest member, Whopper (named for the Burger King burger, voiced by B.J. Ward). Whopper was a diaper-wearing golden retriever that had a wildly active imagination. It allowed him to don alter egos as situations called and sometimes led him into telling little white lies.

The pound was a front for the Puppies’ adoption operations. As soon as a puppy was brought in and locked in a cage, they were brought down into a secret lair full of equipment designed to find them their perfect home. Once a connection was made, the pup in question and their potential owner would become bombarded with “puppy power”: a magical force that only the pure of heart can possess that allows a pet and their owner to communicate with each other. The pound possesses numerous escape tunnels that exit through everyday objects in and around the pound to allow the Puppies to get in and out without being seen. Each of the resident Pound Puppies had their own individualized dog house amongst all the standard pens.

Newly added characters included Holly Connor (Ami Foster), a kind girl who had inherited the pound from her great-aunt Millicent Trueblood (June Lockhart) and was able to communicate with the Puppies using puppy power. Millicent’s house and guardianship of Holly was given to the wicked Katrina Stonehart (Pat Carroll). Katrina, modeled after Cruella de Vil from 101 Dalmatians, was a horribly wicked and conniving woman who wanted nothing more than to shut down the pound in order to level it and build a condominium. Her bratty daughter Brattina (inspired by the wicked step-sisters from Cinderella and voiced by Alexander) and equally evil cat Catgut (inspired by Lucifer, also from Cinderella, and voiced by Welker) often aided in Katrina’s plots. Originally, Brattina was meant to be Holly’s wicked sister, but it was decided her evil would make more sense if she was Katrina’s daughter. The decision came too late to change Brattina’s design to better resemble Katrina. Much like Cinderella, Holly was made to do all their chores around the house and often took the brunt of their abuse. An episode was planned to show how Holly ended up as Katrina’s ward to the point that character models for Holly’s parents were created, but the idea was eventually scrapped. Catgut was initially the pet of pound owner Sidney Bigelow (Jonathan Winters) in the special.

The other major threat the Puppies had to contend with was Captain Slaughter (Peter Cullen); a partially mechanical sea captain who was responsible for the destruction of Cooler’s hometown and had an extreme hatred for Cooler. Throughout the first season, some of the characters from the special made appearances, including the dog characters Violet, Barkerville (now voiced by Morse) and Scrounger (with orange fur instead of yellow and now voiced by Gregg Berger), and the human characters Dr. Weston (now depicted as Asian and voiced by Haunani Minn) and dogcatcher Mr. Nabbit (now voided by Welker). 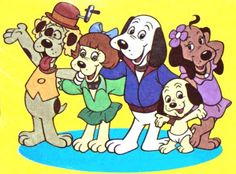 The show did well enough to be renewed for a second season, but it underwent numerous changes before its return to the airwaves. Bright Eyes was made even younger and was given a new outfit. Nose Marie stopped being flirtatious with Cooler to take on a motherly role, emphasized by her appearance now resembling that of a 1950s sitcom mother. Howler’s hat no longer had its crank and he was largely written into the background--even absent from time to time. Holly was given longer hair and jeans in place of her skirt, and was no longer the owner of the pound.

Without explanation, Katrina now owned the pound, but instead of simply shutting it down she began to concoct elaborate plans and devices to either capture or eliminate the Pound Puppies altogether. Her competency was also reduced, becoming more of a comedic villain than a serious threat. Brattina was aged two years, starting the series as 9 ½ and becoming 11 ½, and was given a new jacket. Captain Slaughter was written out of the show as the writers had no further ideas on how to use him and Cullen wasn’t available to record during the season. Another new character from the special, Mayor Fist (Sorrell Booke), made an appearance. Scrounger was given a more prominent role and gray fur, and Dr. Weston was made into an African-American named Dr. Simon (Bever-Leigh Banfield).

The series was renamed All-New Pound Puppies and debuted on September 26, 1987 with a new intro and a more vocal theme-song performed by the cast. The show adopted the typical Hanna-Barbera format of two segments per episode for the first ten episodes, with the last three resuming the original single-story format. One of those episodes was even the series’ first and only musical episode. New writers for the season included Wayne Kaatz, Haskel Barkin, Cliff Roberts, Paul Dini, John K. Ludin, Mary Jo Ludin and Kristina Mazzotti. Foster was nominated for the Young Artists Award in 1988 for “Best Animation Voice Over Group”.

While the second season was underway, production had begun on a big-screen feature film produced by Carloco Pictures, Atlantic/Kushner-Locke and The Maltese Companies for distribution by TriStar Pictures. Written by Jim Carlson and Terrence McDonnell and directed by Pierre DeCelles, Pound Puppies and the Legend of Big Paw featured an older Whopper (still Ward) telling his niece and nephew the origins of Puppy Power. The film featured the same line-up as the series, however using different character designs as well as new Pound Puppies and representatives of Tonka’s cat-based spin-off line, Purries. Buzzi and Cartwright reprised their respective roles while Brennan Howard took over as Cooler and Hal Rayle as Howler (Welker provided his howling effects). The film was released on March 18, 1988 to abysmal reviews; particularly from fans of the series who hated the differences. The film had a short run in theaters and only grossed $587,000. It was the last product-based animated movie of the ‘80s, and TriStar’s only animated feature until 2001.

The only merchandise directly related to the series released were a series of large dolls by Irwin, although they used Cooler’s gray coloring from the special. Other merchandise was released, but all of them featured the designs and characters seen primarily from the special rather than the series. While episodes have not really been released on home video in the United States besides Legend of Big Paw, numerous episodes had been released in other countries on VHS.

“How to Found a Pound” (9/20/86) – The puppies recount how Holly took over the pound and Katrina entered their lives.

“From Wags to Riches” (9/27/86) – The puppies head to a mansion with a new puppy in tow to prevent Katrina’s latest scheme.

“Snowbound Pound” (10/4/86) – A snowstorm and a power outage has Cooler, Howler and Whopper searching for a veterinarian to treat a pregnant dog they found.

“The Fairy Dogmother” (10/11/86) – A wish on a star brings Zazu, an oddball fairy dog mother who is going to help Holly win the boy she likes.

“Whopper Cries Uncle” (10/18/86) – The puppies and Holly attempt to woo money for food out of Whopper’s visiting rich uncle.

“In Pups We Trust” (10/25/86) – The puppies all grow suspicious of each other when their personal items begin to disappear.

“The Captain and the Cats” (11/1/86) – The puppies meet a trio of cats who want Captain Slaughter to capture them—the same guy the puppies are trying to rescue Whopper from.

“Wagga-Wagga” (11/15/86) – Cooler is reunited with his long-lost girlfriend, Penelope, whose very name makes him angry because of their past and the destruction of their old home town.

“Happy Howlidays” (11/29/86) – The pound is closed after Katrina hides some overdue bills, and it’s up to Zazu to help the puppies regain their home.

“Where Do Puppies Come From? / Pups on the Loose” (10/17/87) – Meeting expectant parents prompts Whopper and Bright Eyes to wonder where puppies come from. / The puppies have to stop their charges from fighting.

“The Invisible Friend / Kid in the Doghouse” (10/24/87) – A puppy has an imaginary friend that’s brought to life by puppy power. / A lazy kid runs away from home and moves in with the puppies.

“Little Big Dog / The Bright Eyes Mob” (10/31/87) – The small puppy Nose Marie saves and becomes attached to grows up into a big dog. / Bright Eyes falls into a bad crowd and does their dirty work, making her a wanted criminal.

“Good Night, Sweet Pups / The Rescue Pups” (11/7/87) – Whopper faces his fear of the dark. / When her parents refuse to adopt a puppy a girl runs away from home.

“Nose Marie Day / Snow Puppies” (11/14/87) – The puppies pay tribute to Nose Marie by inventing a holiday about her. / Katrina leads the puppies on an arctic adventure.

“Peter Pup” (12/12/87) – Holly reads Whopper and Bright Eyes a story after they accidentally break the TV.

“Cooler, Come Back” (12/19/87) – Katrina kidnaps Cooler and puts him in another dog pound where he meets a dog that refuses to be adopted.