Fresh off the success of his series Gilligan’s Island, Sherwood Schwartz was working on his next show idea. After reading an article about people with children from previous marriages, Schwartz created a pilot script for a show he called Mine and Yours. The pilot centered on a widower marrying a divorcee, and the three children each one brought from their previous marriages. Schwartz shopped the script around to all three networks and, while they all liked it, they wanted changes made before committing to the script. Schwartz eventually shelved the project. 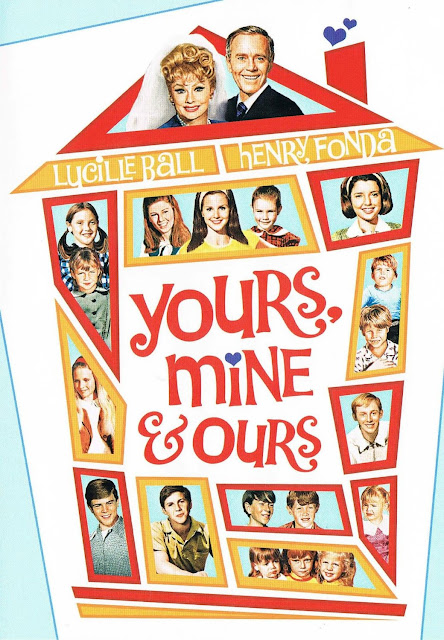 In 1968, United Artists released the film Yours, Mine and Ours starring Henry Fonda and Lucille Ball, which centered on their characters, Frank Beardsley and Helen North, falling in love and getting married with a combined total of 18 children from their previous marriages (Beardsley had 10, North had 8). The film was a box office success, earning over ten times its production budget. Based on that success, and the similar premise, ABC decided to go forward with Schwartz’s series and made a thirteen-week commitment..

The Brady Bunch kicked off with widowed architect Mike Brady (Robert Reed) meeting and falling in love with Carol Martin (Florence Henderson). The fate of Carol’s previous marriage was left intentionally ambiguous in a compromise with Schwartz after the network had objections to her being divorced. The catch-all was that each of them brought three children to the mix: Mike had his boys Greg (Barry Williams), Peter (Christopher Knight) and Bobby (Mike Lookinland), while Carol had her girls Marcia (Maureen McCormick), Jan (Eve Plumb) and Cindy (Susan Olsen). Adding to the chaos was Mike’s live-in housekeeper, Alice Nelson (Ann B. Davis). Situations arose from the new large family getting used to each other as well as dealing with the everyday problems life threw at them.

The most notable aspect of the show was its innovative opening sequence. Making use of the new multi-dynamic image technique created by Canadian filmmaker Christopher Chapman, each of the series’ main cast appeared in a box on a three-by-three grid. As the show’s theme song by Peppermint Trolley Company (for season 1, the kids the remainder of the series) played and laid out the story of the Bradys to the viewers, the cast members seemed as if they were looking at each other between their boxes. The attention this effect gained because of the show led to it becoming known as “The Brady Bunch Effect”.

The Brady Bunch debuted on September 26, 1969 and became the first television series produced by Paramount Studios, which had been exclusively a movie studio until then. The show only achieved modest ratings during its run and the network would only renew it for 13 episodes at a time. At the conclusion of the fifth season (the only season or receive a full episode order), the show had reached enough episodes for a syndication package and was finally cancelled.

When the show was about to enter its fourth season, Schwartz approached Filmation about adapting the sitcom to animation in order to bring the Bradys to a younger audience that may be missing it in its prime time timeslot. Filmation chose to make a show centered solely on the Brady children, omitting Mike, Carol and Alice altogether. Additional focus was given to the band the children formed on the live show in an attempt to further perpetuate the success Filmation had earlier with The Archie Show and its fictitious band.

The Bradys had several new pet sidekicks for their adventures: a dog named Mop Top (replacing Tiger from the live series, voiced by Larry Storch); a talking mynah bird named Marlon (Storch), who flew by spinning his tail and was actually a wizard that frequently employed his magic to get the kids out of jams; and two panda cubs named Ping and Pong (Jane Webb) who only spoke in Chinese-like gibberish. Other new characters include classmates to the Bradys: primary antagonist Chuck White (Storch) who had no problems with cheating to win; his easygoing sidekick Fleetwood (also Storch); and Babs (Webb), who had a crush on Greg.

Initially, Schwartz planned to hand over full control to producers Lou Scheimer and Norm Prescott. However, he took an active role in the show’s production; overseeing scripts and giving creative input. To save on both time and budget (Filmation’s trademark) an extensive amount of animation was reused from Filmation’s earlier teenaged band hit The Archie Show, as well bits and pieces from Fat Albert and the Cosby Kids. The show featured an introduction mimicking the sitcom’s, showing the real Brady kids transforming into their animated counterparts. The theme was composed by Frank DeVol and was similar to the live show’s with a greater touch of 70s style. Ray Ellis handled the rest of the series’ music.

The Brady Kids debuted on ABC on September 9, 1972 as an installment of The ABC Saturday Superstar Movie called “The Brady Kids on Mysterious Island”. The 1-hour pilot movie was later split into the series’ first two episodes, “Jungle Bungle”, and began airing the following week. Filmation took some liberties and had characters from other properties interact with the Bradys, such as the wizard Merlin from Arthurian legend and Silver from The Lone Ranger (a character Filmation would produce adventures for a few years later). Filmation also featured crossovers with DC Comics’ Superman (Keith Sutherland) and Lois Lane, as well as Wonder Woman (both Webb) in her first appearance outside of the comics (a television show was attempted in 1967 by Greenway Productions, but only resulted in a short unaired pilot). The inclusion of Superman and Wonder Woman was Filmation’s attempt to see if action programs could be welcomed back on the air after the hoopla over violence of the late 1960s, as well as if they could sell a “woman’s show” in order to get a strong, female character out there (they later would with The Secrets of Isis and She-Ra). The entire series was written by Marc Richards.

The first season ran for the contracted 17 episodes, but Filmation wanted to produce five more to bring the episode number up to the required syndication amount. Harvey Shotz, agent for the kids, persuaded them to reject Filmation’s request to extend their contracts. Filmation threatened to sue the kids as well as replace them if need be. Ultimately, the three older kids held firm while the younger ones agreed to the extension. Replacing the departing actors were Scheimer’s children Lane and Erika as Greg and Marcia, respectively, and Sutherland (credited as David E. Smith) as Peter. The abbreviated 5-epsiode season came and went in 1973, but the show stayed on the air in reruns until August of 1974 when ABC’s new fall schedule was set to begin. A character introduced during the second season, magically-powered teacher Miss Tickle (a play on “mystical”, voiced by Lola Fisher), was spun-off into her own series called Mission: Magic! that aired the same year. Interestingly enough, the show’s timeslot ended up being taken over by Super Friends, which was produced by rival studio Hanna-Barbera after they acquired the DC Comics license.

While the live Bradys continued to get airplay in syndication and several revival attempts were made, the animated Bradys all but disappeared--at least until 1996. In 1995, Paramount Pictures produced a theatrical movie picking up from the conclusion of the fifth season called The Brady Bunch Movie. The movie featured a new, younger cast in the same roles and followed the principal joke that while the rest of the world had gone on to the 1990s the Bradys were obliviously stuck perpetually in the 70s. A Very Brady Sequel, which hit theaters the following year, featured the return of the characters from The Brady Kids in a dream sequence brought on when Alice (Henriette Mantel) unknowingly gave a man posing as Carol’s (Shelley Long) ex-husband, Roy (Tim Matheson), psychedelic mushrooms in his spaghetti. The only difference was that the animated Jan didn’t wear glasses as she did on the cartoon, and had darker hair and braces.

In 2007, Paramount Home Video released The Brady Bunch: The Complete Series on DVD. Included on a bonus disc were the first two episodes of the animated series, along with a couple of the TV reunion movies. The 2015 re-release of this set excludes that extra disc. In 2016, Paramount released the complete animated series to DVD. For the franchise’s 50th anniversary, Paramount released a complete collection DVD featuring all of the shows and movies except for the short-lived variety show, The Brady Bunch Hour.

“Long Gone Silver” (10/7/72) – Marlon attempts to turn Bobby’s Lone Ranger pin into real silver, but ends up conjuring up the actual Silver instead.

“Cindy’s Super Friend” (10/14/72) – When the Bradys are tricked into painting a bank with invisible paint to make it easier to rob, it’s up to Superman to save the day.

“It Ain’t Necessarily Snow” (11/4/72) – Marlon’s magic complicates things when Greg tries to learn to ski to beat Chuck in a race.

“A Funny Thing Happened on the Way to the End Zone” (11/11/72) – The Bradys end up in a spaceship and befriending real Venusians.

“That Was No Worthy Opponent, That Was My Sister” (11/18/72) – Chuck sabotages Greg and Marcia’s campaigns so that he can win class president.

“You Took the Words Right Out of My Tape” (11/25/72) – The Bradys end up involved in trying to save the Crown Jewels from a pair of thieves.

“Give Me a Home Where the Panda Bears Roam and the Dog and the Mynah Bird Play” (12/2/72) – Marlon’s magic causes chaos on the cattle drive the Bradys go on.

“Marlon’s Birthday Party” (12/23/72) – The Bradys’ surprise party for Marlon is put on hold when he and Merlin accidentally change places in time.

“Wings” (1/6/73) – The Wrong brothers steal parts of the Bradys’ road rally racer in order to build an airplane.

Season 2:
“Frankincense” (9/8/73) – The Bradys have to retrieve their jewel-eating robots from the thieves that took them for their own uses.

“Teacher’s Pet” (9/15/73) – Marlon loans Cindy a wizard’s ceramic cat that comes to life whenever a spell is recited, and Marlon accidentally turns it into a hippopotamus.

“Who Believes in Ghosts?” (10/6/73) – The Bradys’ attempts to restore an old house are foiled by the thieves hiding out there.