Playmates Toys had found great success with their license for Teenage Mutant Ninja Turtles, but they wanted to develop a similar franchise that they could own outright. Inspired by the breakout hit videogames Sonic the Hedgehog and Sonic the Hedgehog 2, Playmates decided their franchise should begin as a videogame. Playmates formed a new division, Playmates Interactive Entertainment, and courted videogame developer David Perry to sign on and helm the division. Perry, tired of the constraints of licensed games (of which he had just done three in a row) instead signed a three-game development deal with Playmates and borrowed the money from them to open his own development studio: Shiny Entertainment, Inc.

With a newfound freedom, Perry began focusing on what kind of property to develop for Playmates. He was introduced to character designer Doug TenNapel and immediately fell in love with his audition sketch: an earthworm. From there, everyone involved with the game’s development was invited to pitch in ideas, resulting in a bizarre collection of characters and surreal level designs. Once concepts were narrowed down, everything was drawn out, scanned into the computer for animating and coloring, and assembled to form a game: Earthworm Jim.

The game was a 2D side-scrolling platformer with elements of a run and gun game. It focused on Jim, an earthworm that had somehow gained a humanoid super suit and a blaster. Jim ran through crazy worlds, using a combination of the blaster and his worm body as a whip on enemies in order to save Princess-What’s-Her-Name (a joke reference to the throwaway damsels in distress in many games) from her evil sister, Queen Pulsating, Bloated, Festering, Sweaty, Pus-filled, Malformed Slug-for-a-Butt, and keep the Queen from reclaiming his suit. TenNapel provided Jim’s voice.

Earthworm Jim was released on August 2, 1994 initially for the Sega Genesis, but was soon ported to other systems. It became a hit, praised for its innovative design and offbeat humor and earning awards recognition. It looked as if Playmates had its franchise, and they were quick to try and capitalize on it. A sequel, Earthworm Jim 2, was ordered into production, and Playmates partnered with Universal Animation Studios to bring the game to Saturday morning television screens to further along the development of their new brand.

Earthworm Jim was developed by Doug Langdale, who also served as the primary writer, and incorporated many elements from the game into its narrative. Jim (Dan Castellaneta) was the bumbling hero who constantly had to stave off his foes’ efforts to steal back his super suit and do horrible things to the universe, or put an end to general mayhem throughout the galaxy. Aiding Jim was his sidekick, Peter Puppy (Jeff Bennet); an ordinarily cute, timid little dog who turned into a monster whenever he was hurt or scared, and usually took his anger out on Jim. In order to remain calm, Peter usually chanted “I must not fear, fear is the mind killer, fear is the little death that brings total oblivion”, which was a modified quote from Frank Herbert’s Dune series. Jim’s other sidekick was essentially a sentient booger named, appropriately, Snott (John Kassir). Snott lived in Jim’s backpack, aiding him with his viscous body by creating parachutes and the like. Snott only spoke in slurps and gurgles that Jim and Peter could understand, and a running gag had them repeating a long comment Snott made with only a couple of sounds. Although Snott only appeared as a platform during a boss battle in the game, his role was similarly expanded upon in the sequel.

Princess What’s-Her-Name (Kath Soucie) was also amongst Jim’s friends. She was the “ugly” (by her people’s standards) sister of Queen Slug-For-A-Butt (Andrea Martin), the evil ruler of their home planet of Insectika. What’s-Her-Name was locked away by her family because of her hideousness, and upon her escape led a resistance movement against her sister. She was also Jim’s love interest; although she was oblivious to his attempts to woo her and only saw him as an ally. As in the game, the Queen would usually send out various minions in an attempt to reclaim her super suit and conquer the universe. She was assisted by her Royal Adviser, the Archbug (Danny Mann). 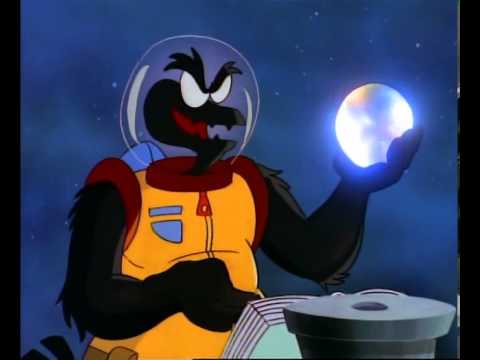 Also, following over from the game were many of the primary antagonists; all of them aptly named. Psy-Crow (Jim Cummings) was a bounty-hunting human-sized crow in a space suit. Besides being Jim’s natural nemesis, he often had grand ambitions and almost took over Insectika once, despite usually working for the Queen. He had also considered trying new careers until he was fired from being a gym teacher for being too nice (despite shooting lasers at the kids). He often worked with Professor Monkey-For-A-Head (Charles Adler). The Professor was the inventor of the super suit and was unable to make another due to its power source: the Battery of the Gods (changed from the game’s reason that his monkey half ate the plans). He would often use his sinister inventions against Jim in an attempt to reclaim the suit, and relied on his monkey half whenever he needed his abilities to make a quick escape.

Evil the Cat (Edward Hibbert) was the ruler of the hellish Planet Heck and sought to destroy the universe, rather than obtain the super suit like in the game. Evil would often use disguises to get close to Jim with the assurance “Did I mention, I’m not a cat?” and would have his plans foiled by outside forces; such as origami, the Department of Apocalyptic Affairs, and the show’s budget running out leading to “A minor setback.” His loyal minion was Henchrat (Kassir), a human-sized dim-witted rat in bulky armor. Despite his villainous occupation, Henchrat enjoyed watching mimes, taking self-actualization courses, and hoped to one day open a macramé shop.

Bob the Killer Goldfish (Cummings, using a deep southern drawl) was from the planet La Planeta de Agua (Arriba!). Being a fish in a bowl, he primarily used muscle-bound cat minions with number designations to get around and do his battles. He spent a lot of time trying to motivate his fellow fish to go on a destructive rampage, often backed by slow instrumental gospel music giving him the aura of a televangelist.

The series also introduced several new characters exclusive to the show. Evil Jim (Castellaneta, using a voice similar to his Krusty the Clown) was a green-colored evil duplicate of Jim, the result of a toxic waste/photocopier accident; Mrs. Bleverage (April Winchell) was Jim’s curlers-wearing neighbor in the Earth town of Terlawk that ended up becoming a resident of Insectika and a friend to the Queen; Grayson (Kassir) was a boy genius and head of the Earthworm Jim Fan Club; Walter (Cummings) was a hillbilly with very bad teeth who often used Jim as dental floss; and Johnny Dactyl (Cummings), a scrawny man in a suit, and the Hamsternator (Castellaneta), an anthropomorphic hamster with a fetish for packing his cheeks to capacity, were two of Terlawk’s resident ineffectual superheroes.

Earthworm Jim was one of the launch programs for The WB’s new Kids’ WB programming block on September 9, 1995; a little over two months before Earthworm Jim 2 was released. It was written by Langdale with Thomas Hart, John Loy, Steve Roberts, Jim Peterson, John Behnke and Rob Humphrey. The series attempted to emulate the absurdist humor of the game, even before an episode started with the words of the theme by William Kevin Anderson (“Jim was just a dirt / Eating chewy lengths of worm…”). An episode typically began with a cold opening that showed Jim and Peter in some kind of peril that had nothing to do with the episode’s actual plot. There would also be an unrelated subplot that would focus on one of Jim’s enemies doing something in their lives; such as Psy-Crow changing careers, Evil becoming a movie star to further his evil plans, or the Professor attending group therapy. Just as the game ended with the Princess being crushed by a cow launched by the player on the first level, an episode would end with a character (usually Jim) being randomly crushed by a cow. Along with Anderson, Patrick Griffin composed the music for the series and AKOM Production Co. rendered the animation. Although initially warmly received and earning a second season, the ratings didn’t hold up to warrant a third and the show was cancelled after 23 episodes. TenNapel admitted to hating the show and confessed its only purpose was to further promote the games.

As part of their franchise idea, Playmates manufactured a toy line that was strongly based on the cartoon, but also incorporated elements from the games as well. The first wave featured several Jim variants, his pocket rocket, the Princess, the two forms of Peter, Bob and Number 4, Evil and Henchrat, and Psy-Crow with Major Mucus, who had never appeared in the show. A second wave was planned to include the Queen, the Professor, The Hamstinator, more Jim variants and a motorcycle, but poor sales of the toys led to the line’s cancellation. Taco Bell also released a series of four toys. Marvel Comics was licensed to produce comics that combined elements from the show and games. They released three issues in the winter of 1995/96. In 1996, four VHS collections (three in the UK) with two episodes each were released by Universal Home Entertainment. In 2011, Via Vision Entertainment released the complete series to DVD in Australia and New Zealand. Visual Entertainment released a North American set in 2012.

The Earthworm Jim franchise continued on in video game form for two more games (with a third having been cancelled). However, reception for each successive game became increasingly negative as the original creators had long ceased involvement with their production; most of them leaving Shiny shortly after its acquisition by Interplay Entertainment in 1995. And while the games forged their own continuity separate from the cartoon, Evil Jim and Henchrat were eventually incorporated into the series with Menace 2 the Galaxy. Castallaneta was even retained to provide Jim’s voice in Clayfighter 63 1/3 and Earthworm Jim 3D.

EPISODE GUIDE:
Season 1:
“Sidekicked” (9/9/95) – After Peter botches a mission by turning into a monster and attacking Jim, Jim decides to find a new sidekick.

“The Book of Doom” (9/16/95) – Jim’s pop-up book contains the secret to universal destruction, and Evil the Cat wants it.

“Conqueror Worm” (10/7/95) – A photocopier accident leads to Jim creating an evil duplicate of himself.

“Sword of Righteousness” (10/21/95) – Jim finds an enchanted sword in a sandwich vending machine and the sword begins to train Jim into its idea of a hero.

“Bring Me the Head of Earthworm Jim” (11/18/95) – Psy-Crow and Professor Monkey-For-A-Head recall the time they replaced Jim’s suit with a weak duplicate.

“Queen What’s Her Name” (11/25/95) – The Princess finally succeeds in overthrowing her evil sister.

Season 2:
“The Origins of Peter Puppy” (9/7/96) – Jim and Peter travel through Peter’s subconscious to figure out why he transforms.

“Evil in Love” (10/26/96) – Evil falls in love with Malice the Dog, who manages to trap Jim and his friends in a nightmare realm to face the Lord of Nightmares.

“Lounge Day’s Journey Into Night” (11/16/96) – Peter and Jim decide to switch roles as Evil plots to destroy the universe by getting lounge singers to sing a cursed song.