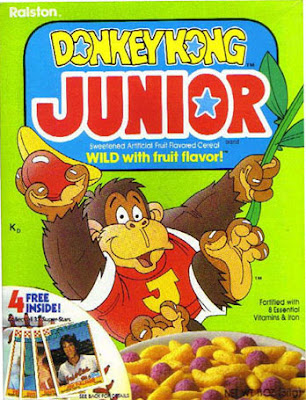 Following the incredible success of arcade hit Donkey Kong, Nintendo commissioned the creation of a sequel. Donkey Kong Jr. hit arcades in 1982 and followed the son of Donkey Kong as he set out to rescue his father from the clutches of Mario (in his only turn as a videogame villain). Ralston, having already produced a cereal for Donkey Kong, quickly snatched up the license to Jr. and created a cereal based around that.

Unlike Donkey Kong Cereal, Donkey Kong Junior Cereal was fruit-flavored and featured shapes reminiscent of bananas and apples. The commercials for the cereal featured two kids sitting down to breakfast, then becoming immersed in an animated jungle once they start pouring the cereal into their bowls. Unlike how he appeared in the game art, Junior wore a full-body red outfit with a yellow “J” and white cuffs. The cereal offered several premiums, including baseball cards, three different game books, free fruit flavored Pez, and a mail-away offer for a Junior Pez dispenser (which was just their standard gorilla dispenser with a “J” stuck onto its hat).
Posted by Chris Buchner at 8:02 AM