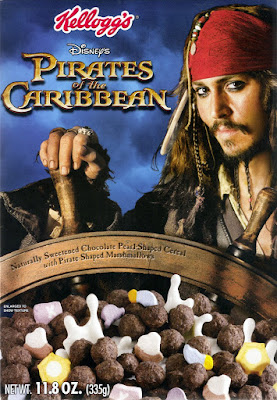 Pirates of the Caribbean began as an attraction at Disneyland. It was the last attraction whose construction was overseen by Walt Disney as he died three months before it opened in 1967. It’s an enclosed log flume ride that tells the story of a band of pirates and their adventures using a variety of audio-animatronic characters.

In 2001, Walt Disney Pictures decided to attempt to adapt the ride into a film. Jay Wolpert was hired to write a script based on a story by executives Brigham Taylor, Michael Haynes and Josh Harmon. Debate was had whether to make it a theatrical release or direct-to-video. In 2002, Dick Cook managed to bring producer Jerry Bruckheimer on board and he hired Ted Elliott and Terry Rossio to rewrite the script they had; lessening the straightforward pirate story in favor of featuring the supernatural curse the ride itself made mention of.

Pirates of the Caribbean: The Curse of the Black Pearl was released on July 9, 2003. It followed the adventure of deposed Captain Jack Sparrow (Johnny Depp) as he sought to reclaim his ship, The Black Pearl, from his former crew. Unfortunately for Jack, his crew was on a mission of their own: to free themselves from the curse of a treasure they stole that kept them immortal and turned them into skeletons in the moonlight. The film defied expectations (the last ride-themed movie flopped and pirate movies hadn’t been popular in years) and became the fourth-highest grossing film of 2003. It gave birth to a powerful franchise, with sequels and media tie-ins galore.

In preparation for the first sequel, Dead Man’s Chest, Kellogg’s acquired the license to produce a limited-edition cereal based on the film in 2006. The cereal was made with round chocolate pieces, symbolizing a “black pearl.” It also included marshmallows in the shape of daggers, treasure maps, a ship’s wheel, Jack’s hat and compass. There were two versions of the box: a blue one with the basic Pirates title, and a red one with the Chest subtitle. Depp, as Jack, adorned the front and back of both boxes. The back of the blue box featured a maze game inside one of the gold coins from the first movie, as well as a fill-in-the-word game. The red box had a larger maze game featuring elements from the sequel.

Email ThisBlogThis!Share to TwitterShare to FacebookShare to Pinterest
Labels: Disney, Kellogg's, Pirates of the Caribbean Cereal