CAPTAIN CAVEMAN AND THE TEEN ANGELS

From 1977-1979, Hanna-Barbera dominated two hours of Saturday morning on ABC. This programming block was dubbed Scooby’s All-Star Laff-A-Lympics, and featured 11 minute episodes of Laff-A-Lympics and Dynomutt, Dog Wonder, 22 minute episodes of The Scooby-Doo Show and reruns of Scooby-Doo, Where are You!, and, the focus of this particular entry, Captain Caveman and the Teen Angels.

Created by Joe Ruby and Ken Spears, the show was a parody of the popular ABC television series Charlie’s Angels. The Teen Angels—comprised of their brilliant unofficial leader Dee Dee Skyes (Vernee Watson), the cowardly Brenda Chance (Marily Schreffler), and the clever Taffy Dare (Laurel Page)—stumbled across the frozen body of Captain Caveman (Mel Blanc) and thawed him out. “Cavey,” as the girls called him, found inspiration in his design from the Slag Brothers from the earlier Wacky Races series; having a body almost entirely obscured by thick fur except for his appendages and nose. He possessed super strength and flight, as well as the ability to hide and pull anything from out of his hairy body and eat almost anything. However, his abilities were often hampered by his limited intelligence. His club also contained a variety of tools he could use on a case, provided by a prehistoric bird that lived inside.

Captain Caveman and the Teen Angels’ first season ran as part of Scooby’s All-Star Laff-A-Lympics from September 10 to December 24, 1977, running one 11-minute segment per week. The characters also all appeared in the Laff-A-Lympics segment of the block as members of the Scooby Doobies team, filling in for the intended characters from Josie and the Pussycats, whose rights were held by Archie Comics. The 8-episode second season remained with the block when it was reduced to 90 minutes and renamed Scooby’s All-Stars in 1978. In 1980, the series graduated to its own half-hour for 16 more episodes. During the run, Cavey and the Angels appeared in Hanna-Barbera TV Stars and Scooby-Doo #9, both published by Marvel Comics. Milton Bradley also released a board game based on the show. In 2018, a more realistic take on Captain Caveman and the Teen Angels appeared as a back-up feature in Aquaman/Jabber Jaw Special #1, part of the second-wave of Hanna-Barbera/DC Comics crossovers. 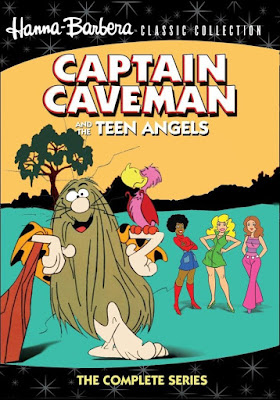 Following the show’s cancellation, Captain Caveman remained a Hanna-Barbera mainstay throughout the 80s, joining his prehistoric brethren on The Flintstone Comedy Show and then The Flintstone Kids, and appearing in numerous parodies and cameos in the years following. The Teen Angels, however, weren’t so lucky as it took them until 2011 to resurface in an episode of Scooby-Doo! Mystery Incorporated. In 1988, Castilian released a collection of 13 episodes on VHS in the United Kingdom. In 2013, the entire series was released to DVD by Warner Archive as part of their Hanna-Barbera Classics Collection.


EPISODE GUIDE:
Season 1:
“The Kooky Case of the Cryptic Keys” (9/10/77) – A key leads the gang to a will reading at Skeleton Mountain where the Great Mysto plots to keep the fortune for himself.

“The Mixed Up Mystery of Deadman’s Reef” (9/17/77) – The gang investigates the mystery of a disappearing ship.

“What A Flight for a Fright” (9/24/77) – A jewel thief disappears from a commercial flight, leading the gang to figure out how to catch him before he disappears again.

“The Creepy Case of the Creaky Charter Boat” (10/1/77) – The gang attends an actor party when a diamond necklace is stolen in a mystery that resembles the actors’ play.

“Big Scare in the Big Top” (10/8/77) – The gang investigates the disappearance of tigers from a circus.

“Dobule Dribble Riddle” (10/15/77) – A supposedly cursed basketball team keeps forfeiting games, leading to their owner deciding to sell it to a dubious buyer.

“The Crazy Case of the Tell-Tale Tape” (10/22/77) – The gang learns of a robbery at the Smithsonian after a masked figure interrupts a television broadcast.

“Cavey and the Kabuta Clue” (11/5/77) – An African Chieftain’s skeleton comes back to life and kidnaps the owner of an art museum in order to retrieve the golden mask he sold.

“Cavey and the Weirdo Woman” (11/12/77) – The gang helps their prince friend retrieve his stolen scepter from a snow wolf.

“The Disappearing Elephant Mystery” (11/19/77) – The gang witnesses as a rare white elephant disappears from the middle of a parade in India.

“The Strange Case of the Creature from Space” (12/10/77) – The gang encounters an alien robot that steals a rare mineral.

“Playing Footsie With Bigfoot” (12/24/77) – Athlete Juice Brenner is kidnapped by Bigfoot, but even after being rescued his diminished performance threatens America’s chance at winning the Spartan World games.

“Muscle-Bound Cavey” (9/16/78) – While at a wrestling match the gang witness as champion the Great Colosso is kidnapped.

“Cavey’s Crazy Car Caper” (9/23/78) – The new fuel and energy efficient Condor car is stolen, leading to the gang having to investigate.

“Cavey’s Mexicali 500” (9/30/78) – While on vacation in Mexico, the theft of an Aztec calendar leads the gang into entering a desert race.

“Cavey’s Winter Carnival Caper” (10/14/78) – The gang seeks to rescue their friend, a professional ice skater, who is kidnapped.

Season 3:
“The Scarifying Seaweed Secret” (3/8/80) – With an inheritance at stake, the gang tries to solve the mystery of a sea creature who kidnaps members of a wealthy family.

“The Dummy” (3/15/80) – What happens in Vegas stays in Vegas, unless your jewels are stolen from an impenetrable vault.

“Cavey and the Volcanic Villain” (3/22/80) – While the gang is in Hawaii, a jewel is stolen and a goddess threatens to curse the island with continuous volcanic eruptions.

“Prehistoric Panic” (3/29/80) – Attempting to get the gang out of traffic, Cavey flies too fast and ends up taking them all back in time.

“Cavey and the Baffling Buffalo Man” (4/5/80) – A Buffalo Man uses coded messages to find gold coins in a mansion, and the gang has to stop him.

“Cavey and the Murky Mississippi Mystery” (4/19/80) – The gang must recover a secret case bound for a nuclear lab and stop the river creature that caused its loss.

“Cavey and the Albino Rhino” (5/3/80) – A witch doctor steals a rare white rhino on its way to a Wild Animal Land preserve, which also leads the gang to discover a diamond heist.

“Kentucky Cavey” (5/10/80) – Taffy’s uncle is losing his property and the gang needs to rescue his horse so he can win the money he needs in the Kentucky Derby.

“The Haunting of Hog Hollow” (5/24/80) – The gang’s singer friend has his performance sabotaged before he ends up kidnapped.

“The Legend of Devil’s Run” (5/31/80) – The gang investigates the ghost of a Civil War general who made off with a munitions train car with a fortune in silver.

“The Mystery of the Meandering Mummy” (6/7/80) – A mummy steals a rare Egyptian ruby from Brenda’s uncle.

“The Old Caveman and the Sea” (6/14/80) – On vacation in Miami, the gang helps treasure hunter Jacques LaFarge locate his stolen recent finds.

“Lights, Camera…Cavey!” (5/21/80) – A phantom causes young actresses to get prematurely wrinkled, leaving the gang to help them restore their looks and keep their careers.