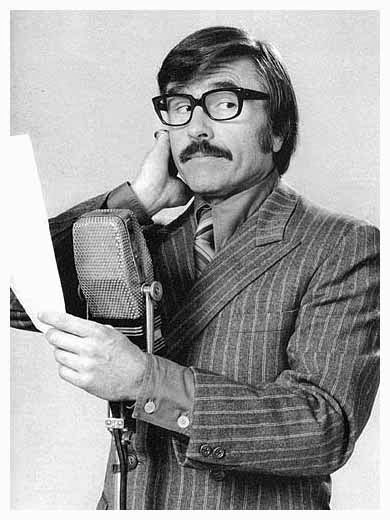 Gary Owens died on February 12th at the age of 80. You can read the full story here.

While primarily known as an announcer, Owens lent his voice to a great many Saturday morning cartoons. He was the original voice of Space Ghost on Space Ghost and Space Stars (with a non-Saturday reprisal on Batman: The Brave and the Bold) and the Blue Falcon on The Scooby-Doo/Dynomutt Hour, Scooby's All-Star Laff-A-Lympics, and Dynomutt Dog Wonder (again reprised off Saturday on Johnny Bravo), and served as the announcer and instructor frequently featured on Garfield and Friends and Eek! the Cat. He tapped his announcing skills as the narrator for Captain Caveman and the Teen Angels, Yogi's Space Race, The Mighty Orbots, Yogi's Treasure Hunt, and the opening for Buzz Lightyear of Star Command, while also providing additional and guest voices for Bobby's World, Goof Troop, Raw Toonage, Tom & Jerry Kids, Skeleton Warriors, The Twisted Tales of Felix the Cat, Aahh!!! Real Monsters, The Mask, and The New Batman Adventures. Rock 'n' Wrestling Saturday Spectacular, a spin-off film from Hulk Hogan's Rock 'n' Wrestling, featured Owens making an appearance as himself.
Posted by Chris Buchner at 6:50 PM