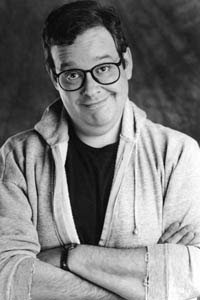 Joe Alaksey died on February 3, 2016. You can read the full story here.

Alaskey was Warner Bros.' permanent voice for such classic Mel Blanc characters as Daffy Duck, Yosemite Sam, Sylvester Cat, Tweety Bird and even Marvin the Martian. As such, he played Sylvester and Tweety on The Sylvester and Tweety Mysteries and provided Daffy's voice for the opening of The Bugs n' Daffy Show. He was also best known by a generation as the voice of Plucky Duck, his father, the aforementioned WB classics and other minor roles on both Tiny Toons Adventures and The Plucky Duck Show and their related media, as well as the second Grandpa Lou Pickles and other voices on Rugrats, All Grown Up and their related media.

He was also Sourpuss on Mighty Mouse, the New Adventures, the sheriff in two episodes of Back to the Future: The Animated Series, reprised his role of Stinkie from the Casper movie and played the Gorey Narrator on The Spooktacular New Adventures of Casper, was the short bug and a truck driver on an episode of Men in Black: The Series, a soda and news vendbot on an episode of Buzz Lightyear of Star Command, the chief in an episode of Teamo Supremo, and Sylth Vester, the Royal Tweetums, Stoney the Stone and Melvin the Martian on Loonatics Unleashed.

He also provided voices in episodes of Where's Waldo?, Life With Louie and Timon & Pumbaa.
Posted by Chris Buchner at 11:30 PM