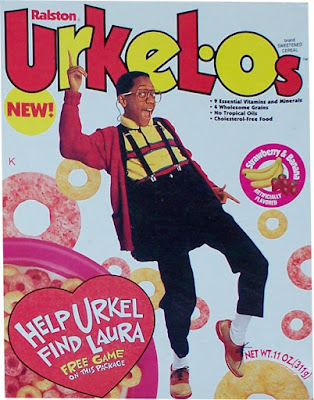 Family Matters was a sitcom that ran from 1989 to 1998 across two networks. Spinning off from Perfect Strangers, the series initially focused on the lives of the members of the Winslow family: Chicago police officer Carl (Reginald VelJohnson), former Perfect Strangers elevator operator Harriet (Jo Marie Payton), their eldest son Eddie (Darius McCrary), their middle daughter Laura (Kellie Shanygne Williams) and their youngest daughter Judy (for the first four seasons played by Jaimee Foxworth), as well as Harriet’s live-in widowed sister Rachel Crawford (Telma Hopkins), her son Richie (Bryton McClure, originally portrayed as a baby by twins Joseph & Julius Wright) and Carl’s mother Estelle (Rosetta LeNoire). That is until halfway through the first season when the Winslow’s annoying neighbor Steve Urkel (Jaleel White) was introduced. In what was intended only to be a one-shot appearance, the audience was taken with the stereotypical nerd and he quickly became the central character of the show with his clumsy antics, bizarre science experiments, and zany attempts to win Laura’s heart. After nine seasons, the series had secured its place in history as the third longest-running series with a central African-American cast.

In the meantime, by 1991 the country was in the grip of Urkel-Mania. The character prominently adorned all merchandise including books, a Milton Bradley board game, a Colorforms playset, and even a talking doll. Ralston, not one to miss a licensing opportunity, jumped on the Urkel bandwagon and created a cereal based around the character.

Urkel-Os was a strawberry and banana flavored cereal that came in generic ring shapes reminiscent of Kellogg’s Fruit Loops. While the cereal itself didn’t have much to do with Urkel (probably a good thing, since the character’s favorite food was cheese), the box more than made up for it with several images of the character in various dancing poses around the box. On the back panel came one of two games; “Fishing with Urkel” or “Find Laura.”

The advertisement for the cereal featured Urkel on the set of Rachel’s Place (the eating establishment owned by Rachel) rapping about his latest scheme to win the love of Laura by creating the cereal. None of the other Family Matters characters appeared, and Laura was represented by a picture frame whose front the audience never saw.

Promotions included an air car game (the box became a track and had “cars” you could cut out and blow on to race), an offer for free fruit and a chance to meet Urkel in Hollywood. When the cereal offered a chance to win a trip to Washington, D.C. in 1992, the Urkel on the front of the box was given an Uncle Sam-like costume with a drum to play, and came with “Urkel for President” campaign button stickers.
Posted by Chris Buchner at 8:01 AM