Flint the Time Detective began as a manga created by Hideki Sonoda and Akira Yamauchi. Known in Japan as Jikū Tantei Genshi-kun (or Space-Time Detective Genshi), the manga ran across three volumes published by Bros. Comics. In 1998, TV Tokyo commissioned the adaptation of the manga into an anime series.

At the heart of the story were two separate and distinct lands: the Land of Dread (called Underworld in Japan) where the sinister Dark Lord (Toshiyuki Morikawa & Tom Wyner) was tasked with keeping souls within, and the Land of Time, overseen by the Old Timer (or Time-G, voiced by Katsumi Suzuki & Kim Strauss) who monitors the events of history and keeps the clock in the land running so history could keep flowing. The Dark Lord became affected by the land he guarded, growing cold and emotionless and resented his duties. He attacked the Land of Time, seeking a chance to be able to grow old from his perpetual child-like form. The attack resulted in the scattering of the Land of Time’s guardians, the Time Shifters, throughout time. 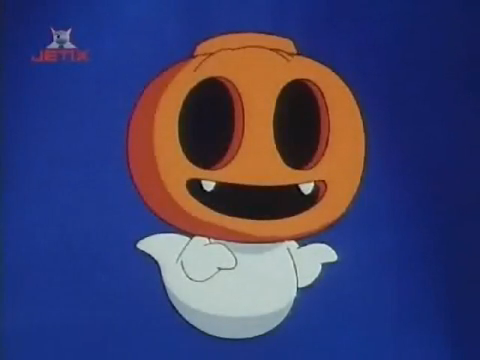 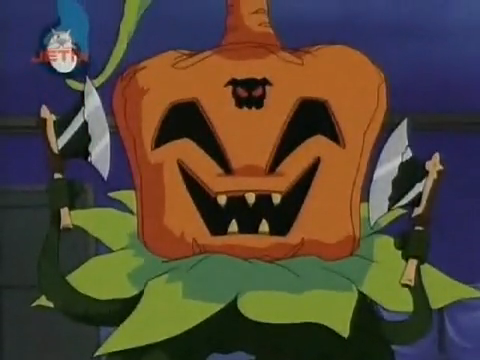 The Time Shifters (known as Jiku Monsuta, or Space-Time Monster in Japan) were creatures that had magical abilities and could assume several different evolutionary forms; some of which were never seen on the show itself but only in concept art or in mangas. Their primary forms were of cute little creatures. Their Master Forms were achieved when in control of good and allowed the Time Shifters to assume humanoid warrior appearances. Their Con Forms were the result of being controlled by evil and gave them a more demonic appearance. Many of them resembled everyday animals or objects with abilities to match, such as Lynx (or Sufin, Michael Sorich, who also served as one of three voice directors), who resembled a Sphinx and was good at riddles; Raldo (or Rarudo, Asami Nakajima & Cansino), resembling a turtle who could trap people in his shell; Musey (or Myuji, Wendee Lee), resembling a musical note with the ability to recognize beautiful music and use it to overpower emotions; and Change (or Kozeni, Steven Blum), who resembled a purse and hypnotized people with the promise of wealth. Dark Lord sought to retrieve the Time Shifters and use their Con Forms to finish what he started.

Unable to leave the Land of Dread himself, Dark Lord relied on the services of others. Aiding Dark Lord was Petra Fina Dagmar (Hitomi Aino or T.P. Lady in Japan, voiced by Yumi Touma & Barbara Goodson) and her two minions Dino Fishman (Yuji Ueda & Lex Lang) and Mite (Chafurin & David Lodge). Petra’s allegiance to Dark Lord came from her infatuation with him, which he used to his advantage by dangling her along. Dino was an experimental eel and Mite a frog who were freed and made humanoid by Petra. When not on missions, they posed as teachers Ms. Iknow and Mr. Dino and Principal Mite, respectively, at the young protagonists’ school.

By the time the 25th Century had rolled around, time travel had become a common occurrence. To protect the integrity of time, the Old Timer created the Bureau of Time & Space Investigations, also known as the Time Police. Run by Jillian Gray (Rei Jinguji in Japan, voiced by Mami Nakajima & Mari Devon), time detectives were sent out into history in order to repair any anomalies. The Time Police were tasked with retrieving the Time Shifters before Dark Lord could, and they ended up being joined by an unlikely new recruit.

During one of their trips through time, Petra and her minions encountered young caveboy Flint (Genshi in Japan, voiced by Yukiji & Martin Klein) and his father, Rocky (Dad-tan in Japan, voiced by Fumihiko Tachiki & Bob Papenbrook). Flint and Rocky were petrified by Petra and ended up being reawaken in the 25th century by Dr. Bernard Goodman (Professor Yamato in Japan, voiced by Masamichi Sato & Richard Cansino).  However, only Flint was restored to flesh and blood; Rocky remained stone, though sentient, and was fashioned into a hammer for Flint to use. Eager for payback against Petra, Flint joined the Time Police to aid them in their mission. Flint wasn’t much of a detective, but proved useful in a fight.

Joining Flint were Goodman’s niece and nephew, Sara (Sora in Japan, voiced by Nana Mizuki & Tifanie Christun) and Tony (Tokio in Japan, voiced by Chiaki Morita & Brian Donovan), as well as Time Shifter Getalong (or Raburabu, Mayuko Ominura & Mona Marshall), a penguin-like being who could make people get along, that had been with Flint during the Stone Age when he and his father were attacked. They also had Pterry (Chinami Nishimura & Greg Berg), a robotic Pteranodon that accompanied Flint on his missions and was responsible for erasing the memories of anyone that encountered the time detectives or their foes in history (such as historical figures who came to possess Time Shifters, like Beethoven, Christopher Columbus and Leonardo da Vinci). From their home base of Tama City, Dr. Goodman would send Time Shifters the team retrieved into the time stream to aid Flint and his crew as needed.

Eventually, they were joined by time detective Merlock Holmes (a play on Sherlock Holmes, called Kyoichiro Narugami in Japan, voiced by Kappei Yamaguchi & Dave Mallow). Holmes was descended from vampires, which explained his pale complexion and purple hair. He was initially assigned to followed Flint and his friends to evaluate their progress. He was the show’s comedy relief; with his generally being very clumsy. While he possessed some of the typical vampiric abilities, Holmes also relied on a bit of magic to get by; particularly via the objects he carried, such as a rose that could become a heat-firing cane, or wore, such as his cape that could become a shield. Holmes soon got his own Time Shifter partner in the form of Bindi (or Anmon, Rika Wakusawa & Melissa Fahn), who resembled an Ammonite that could give or take life force.

There were four Time Shifters who were evil from the outset; created by Dark Lord from flowers. Super Ninja (or Nioja, Wataru Takagi & Tom Fahn) was an Oriental-themed warrior who fought with a staff; Uglinator (or Desudasu, Takuma Suzuki & Joe Ochman) was a sinister-looking skull with horns that could possess people; Nascal (or Nasukaru, Sachiko Sugawara & Ochman) was a rooster-like creature that could teleport; and Ominito (or Gera, Mitsuo Iwata & Sorich) was a mushroom-like creature who used video game-based attacks. Like the other Time Shifters, these too could transform into bigger and more powerful versions of themselves. Despite the previously established form names, the next forms of these Time Shifters were called “Super”, later adapted into “kon” by the English translation to bring it closer to “Con”. Super Ninja was the only one of these Time Shifters who kept the “Super” in his name regardless of his form.

The anime, known as Space-Time Detective Genshi-kun, debuted on Japan’s TV Tokyo on October 1st, 1998 and ran for 39 episodes into 1999. Shimo wrote the series along with Hideki Sonoda, and it was directed entirely by Hiroshi Fukutomi. Sachiko Oohashi handled the character designs and the series’ music was composed by Tadashi Namba and Toshio Masuda. Group TAC handled the primary animation with Studio Tulip working on the backgrounds, and Asahi Production and D/Max Studio working on the computer animated components.

Sometime after its initial broadcast, Saban Entertainment licensed the broadcast rights for the series in the United States through The Right Stuff International. Along with translating the series, which was handled by Grace Anderson, Saban had additional changes made. Parts of episodes were removed and replaced with filler scenes and the entire musical score was redone by Alexander van Bubenheim, Glenn Scott Lacey, Jeremy Sweet, Michael Whittaker, Shuki Levy and Haim Saban (as Kussa Mahchi). Many characters had their genders swapped, such as Pterry. Holmes also lost his ability to sing and his personal fortune, which were present or mentioned in the original anime. The series was also heavily Americanized, having the characters originate from the United States instead of Japan and changing character names and places. The Americanized version of the series ran on FOX’s Saturday morning FOX Kids programming block from March 5th to December 17th, 2000. It also aired on weekdays and FOX’s sister channel Fox Family. The English scripts were written by Bridget Hoffman, Jeff Winkless, Mark Ryan, Michael McConnohie, Rebecca Olkowski, Stephen Apostolina, Tom Wyner and Tony Oliver. Additionally, the series had been translated into French, Spanish, Italian, German, Dutch and Portuguese over the following years.

To promote the series, Bom Bom Comics produced a short 6-chapter manga that influenced several episodes. The manga introduced four new Time Shifters not presented in the anime: Wolfen, a wolf-like creature that could walk on air; dragon-like HaniWani that could eat through rock; Hanasaka, resembling a tree stump that could grow flowers; and Funga (actually introduced in the Bros. Comics run as Time Shifter No. 5), a large and intimidating creature who was actually a huge coward. The Time Shifters that did appear in the anime had differing designs than how they were presented in the manga and were represented as devices with mechanical components, as was the original intent. Instead of Jillian, an old man named Z·Z ran the Time Police. The manga had an overall darker and more mature tone than the anime, and Holmes was less of a klutz. There was also a lack of memory erasing, allowing changes in the timeline to stand as long as they were minor. Section 23 released several episode compilations on both VHS and DVD between 2000 and 2001.

“Talen” (10/22/98 JAP, 3/12/00 US) – In 7th Century Japan, Peta Fina and Flint are stranded in the tale of Princess Kaguya where Flint befriends the time-shifter disguised as the princess.

“Cocnaut” (11/5/98 JAP, 5/19/00 US) – Time-shifter Coconaut is serving with Christopher Columbus, and to get him Petra Fina inspires Columbus’ crew to mutiny.

“Bindi” (12/17/98 JAP, 4/22/00 US) – Traveling to Transylvania to get Bindi from Count Dracula also leads to the discovery of an undercover time detective: Merlock Holmes.

“Nightcap” (4/1/99 JAP, 8/6/00 US) – Hans Christian Anderson uses Nightcap to help him sleep, and to stop Petra Fina from getting him Talon sends everyone into one of Hans’ stories.

“Dipper” (4/29/99 JAP, 9/8/00 US) – Marco Polo and Dipper rescue the time detectives, but soon become their enemies when Petra Fina spreads vicious lies about them.