For the history of Superman, check out the post here. 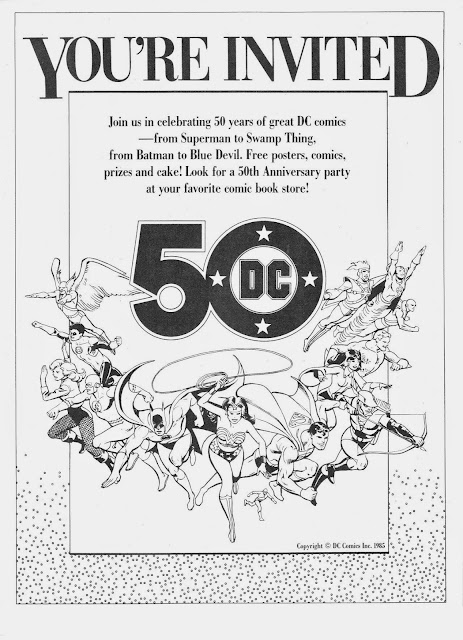 As the DC Comics Universe was nearing its 50th anniversary, there were some growing pains to contend with; namely that in that time, the established history of the characters just didn’t mesh. How could Superman be the last son of Krypton if there was an assortment of other Kryptonians running around? How is it that Batman served in World War II and yet still looks to be in his 30s? And just what were they going to do with all those many parallel Earths they had created as an explanation for some of the more out-there stories from the Golden and Silver Age of comics?

Marv Wolfman and Len Wein proposed a plan to help clean-up DC’s convoluted continuity with an event called Crisis on Infinite Earths (named for the annual Justice League/Justice Society crossovers that began with “Crisis on Earth-One”). The story followed a cosmic being known as the Anti-Monitor as he began destroying the parallel worlds of the DC Universe, and various heroes and villains from the five remaining ones banded together to put a stop to him. Ultimately, the five realities end up merged as one. Crisis on Infinite Earths ran as a 12-issue maxi-series between 1985 and 1986.

A few months after Crisis concluded, writer/artist John Byrne—fresh off a split from rival Marvel Comics—was tapped to pen the official new origin for Superman. His six-issue mini-series, The Man of Steel, gave a rundown in the key moments of Superman’s life. The post-Crisis Superman had a specific set of largely reduced powers (no more towing entire planets with giant chains); Martha and Jonathan Kent were still alive (their status changed quite often, with one or both of them being alive or dead at different points in Superman’s life, as well as being depicted at different ages); Lex Luthor went from being a mad scientist to a corrupt billionaire industrialist; Superman no longer had costumed adventures as Superboy in Smallville and only first donned the costume when he went to Metropolis; all other Kryptonians disappeared with Supergirl becoming an artificial being created by Lex, amongst other changes.

In 1988, the year of Superman’s 50th anniversary, Ruby-Spears Productions acquired the rights to produce the third solo Superman series, and his second on Saturday mornings. The series was the first representation of the post-Crisis Superman outside of comics and closely followed the mythology established in The Man of Steel (unlike the live-action Superboy series that debuted the same year). However, it was also heavily influenced by the Superman film franchise starring Christopher Reeve as evidenced by its portrayal of a bumbling Clark Kent to distinguish his identity from Superman (Beau Weaver), and the use of a re-orchestrated version of John Williams’ “Superman March”. It also paid homage to previous incarnations through the introductory narration from The Adventures of Superman, which was spoken by William Woodson from the just-concluded Super Friends franchise, and Superman’s constant utterance of “Up, up and away!” whenever he took flight.

Wolfman served as the series’ story editor, as well as writing several of the scripts himself. Artist Gil Kane provided the character designs. Other comic creators who worked on the show were Buzz Dixon, Martin Pasko and Steve Gerber, as well as regular television writers Karen Wilson, Chris Weber, Michael Reaves and Larry DiTillio. Ron Jones was the show’s composer, and the show was animated overseas by Toei Animation and Dae Won Animation.

Superman, also known as Ruby-Spears’ Superman, debuted on CBS on September 17, 1988. Each episode was broken up into two segments. The primary segment focused on the adventures of Superman and his battles against evil. The show utilized a variety of new villains created specifically for the show, but did feature Lex Luthor (Michael Bell) as a recurring foe, complete with Superman-repelling Kryptonite ring. Lex was a cross between the ruthless businessman established by Byrne and the eccentric portrayal of Gene Hackman in the films.

Other villains from the comics included the lethal joking Prankster (Howard Morris); a version of Shadow Thief whose suit allowed him to blend into the shadows; Kryptonian war criminal General Zod (René Auberjonois) who was assisted by his wife/lover (depending on the story) Faora, and Ursa (both Ginny McSwain, also the show’s voice director), who made her first appearance in Superman: The Movie. Futuristic cyborg Cybron (Frank Welker) was a stand-in for villain Brainiac, whose post-Crisis status was still undetermined at the time of the show. A newly created character was Lex’s ditzy girlfriend Jessica Morganberry (Lynne Marie Stewart), who was inspired by the character of Miss Tessmacher (Valerie Perrine) from the films.

The second segment was “The Superman Family Album”. Primarily written by Cherie Wilkerson, these four-minute segments served as a prequel to the overall series by focusing on Clark’s childhood. They began with his being discovered by Jonathan (Alan Oppenheimer) and Martha Kent (Tress MacNeille) up until he moved to Metropolis where he began working at The Daily Planet with Lois Lane (McSwain), Jimmy Olsen (Mark Taylor) and Perry White (Stanley Ralph Ross)—not to mention also becoming Superman. While the segments adhered to the post-Crisis continuity of Clark not having any adventures as Superboy, it deviated a bit by having all of Clark’s powers present while he was a newborn. Those powers often served as the source of comic relief and conflict in the stories. Wolfman and Meg McLaughlin wrote two of the segments, respectively.

Despite the high quality of the production, the show was plagued by several problems including budgetary constraints, high licensing fees and poor scheduling that pitted it against Disney powerhouses Gummi Bears and The New Adventures of Winnie the Pooh. As a result, the show never went beyond its single season. It was notable, however, for being the first television appearance of the post-Crisis Wonder Woman (Marry McDonald-Lewis) from George Perez’s acclaimed reimaging of the character, and her last Saturday appearance until 2016’s Justice League Action (although the character would star in 2001’s Justice League). It was also the first appearance of S.T.A.R. Labs outside of comics; which would come to factor into a variety of future DC Comics-based programs.

In 2009, Warner Home Video released the complete series to DVD. It was also made available for streaming on Amazon.

EPISODE GUIDE:
“Destroy the Defendroids / The Adoption” (9/17/88) – After Lex Luthor’s crime-fighting robots drive Superman away, he uses them to rob a Fort Knox train. / The Kents take baby Kal-El to the orphanage and end up adopting him when his powers drive others away.

“Fugitive From Space / The Supermarket” (9/24/88) – STAR Labs discovers an alien spaceship and Superman has to figure out which of its occupants is a policeman and which is a criminal. / Martha tries to conceal Clark’s powers during his first trip to the market.

“By the Skin of the Dragon’s Teeth / At the Babysitter’s” (10/1/88) – After Luthor buys the Great Wall of China, he accidentally brings a Dragon King statue to life. / Young Clark uses his powers to get away from his babysitter and avoid bedtime.

“Cybron Strikes / The First Day of School” (10/8/88) – Lois’ birthday is interrupted by a hostile cyborg from the future who can turn people into robots. / Clark’s first to day of school introduces him to Lana Lang and trouble when he’s blamed for letting the class guinea pig escape.

“The Big Scoop / Overnight with the Scouts” (10/15/88) – Lex steals a device that allows him to see the future and discovers Superman’s identity. / Clark goes camping with the scouts and they share ghost stories around the fire.

“Triple Play / The Circus” (10/22/88) – Prankster forces Superman to pitch for his baseball team for the lives of the various people he’s captured. / Clark ends up joining the circus.

“The Hunter / Little Runaway” (10/29/88) – General Zod, Ursa and Faora arrive and create a creature called The Hunter who takes on the properties of Kryptonite. / Tired of his home, Clark tries to run away only to discover his life wasn’t so bad after all.

“Superman and Wonder Woman vs. the Sorceress of Time / The Birthday Party” (11/5/88) – Superman stops a meteor and accidentally frees a prisoner on Themyscira as a result. / Clark gets a surprise at his birthday party.

“The Beast Beneath These Streets / First Date” (11/19/88) – Researchers discover a sunken part of old Metropolis where mad scientist Dr. Morpheus plans to steal Superman’s powers. / Clark goes on his first date with Lana.

“Wildsharkk / To Play or Not to Play” (11/26/88) – Superman tries to stop Wildsharkk’s ship hijacking in the Bermuda Triangle. / Clark wants to play football, but his powers give him an unfair advantage.

“Night of the Living Shadows / Graduation” (12/3/88) – Lex invents a suit that makes its wearer become a living shadow and instigates a crime spree. / It’s graduation day, and Clark’s robe ends up dirty right before the ceremony.

“The Last Time I Saw Earth / It’s Superman” (12/10/88) – An alien abducts the shuttle Lois and Jimmy are on in order to steal proteins from their bodies to become immortal. / Clark moves to Metropolis and begins his life as Superman.