Created by author John Peterson, The Littles is a book series that has been published by Scholastic since 1967; continued by other authors after his death in 2002. The series focuses on a tiny family of human-like creatures called the Littles and their people, who secretly live inside the walls of the house of the normal-sized Bigg family. Their diminutive size aren’t the only things that set them apart from regular humans as the Littles also possessed long tails.

The primary characters were William T. Little and Wilma Little, the parents of Tom and Lucy, who lived with Uncle Pete, Uncle Nick, Granny, Grandpa and Baby Betsy. Dinky was an older cousin to the family and flew a glider that provided transport for any of their people in the area, as well as allowed him to seek adventures. He lived with his mother, Lilly, and eventually married a woman named Della. They took great pains to keep the Biggs, and any humans, from learning about their existence.

In 1982, the books were optioned for an animated series by ABC. ABC contracted DiC Entertainment to produce the series, making it one of the first three shows made by the studio along with Inspector Gadget and Heathcliff (1984). While the overall series maintained the core themes of the books, there were numerous changes made in the adaptation. The Little parents were renamed Frank (Gregg Berger) and Helen (Patricia Parris), Uncle Pete became Grandpa (Alvy Moore) and Dinky (Robert David Hall) was the only extended relative to live with the family. Dinky’s competency as a pilot—and in general—was greatly reduced to make him the series’ comic relief, as well as a source of constant aggravation for Grandpa. Dinky’s glider also became a small propeller plane. In addition to their tails, the Littles were given pointy ears and buck teeth making them resemble a cross between humans and mice.

Unique to the series were the recurring villains of Dr. Hunter and his assistant, Peterson (both Ken Sansom). Hunter knew of the Littles’ existence and sought to capture them and prove it. Henry Bigg (Jimmy E. Keegan), the youngest member of the Bigg household, was also aware of the Littles’ existence and befriended them; particularly Tom (Donavan Freberg) and Lucy (Bettina Bush). Henry’s pet turtle, Slick (Frank Welker), served as an emergency go-between whenever the Littles found themselves in over their tiny heads.

The Littles debuted on September 10, 1983 becoming the first DiC production to air on a network rather than syndication. DiC also used a unique logo seen at the end of the show, by having Dinky throw a button to dot the “I” in their name. Haim Saban and Shuki Levy handled the series’ music, and also handled the show’s international distribution through their company, Saban International. Fulfilling FCC educational requirements, many episodes dealt with moral lessons and social issues such as running away from home and drug abuse. Each episode ended with a simple arts and crafts project the viewers could do called “Little Ideas for Big People.” Jeffrey Scott wrote the entirety of the first season.

For the second season, the series received a new opening sequence. The first one featured Henry telling the audience about his secret, with character introductions in a stylized setting (an unfinished version of this intro was used in the 1983 ABC Saturday morning preview special, amongst various clips from the episodes). The second intro revealed that Henry learned about the Littles when Lucy and Tom fell into his suitcase and were cornered by his cat. Both intros’ themes were recorded by Rachelle Cano with different lyrics. Troublemaking cousin Ashley (B.J. Ward) was added to the cast, while Pat Fraley replaced Welker as the voice of Slick. The crafts also became suggestions sent in by viewers. Scott wrote two of the season’s eight episodes, joined by Heywood Kling, Anthony Peckham, Olivier Jean-Marie, Jack Olesker, Kay Hanley an Aaron Springer. 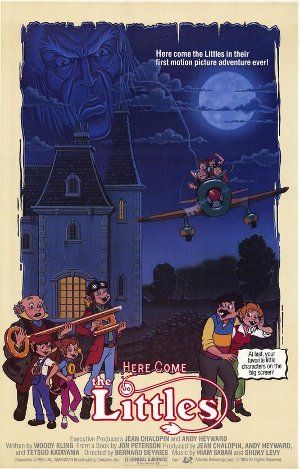 When the series proved popular, ABC commissioned a film spin-off also produced by DiC. Written by Kling and directed by series director Bernard Deyries, Here Come the Littles served as a prequel to the series. Henry’s parents were lost on an archaeological dig and he was made to live with his uncle, Augustus (Hal Smith). Henry and the Littles had to save the Bigg house from being leveled by Augustus to make way for a shopping center. It followed the season two explanation on how the Littles met Henry; however, Henry actually met Grandpa and Dinky before finding Tom and Lucy in his suitcase. The movie was animated by Tokyo Movie Shinsha, who also animated the series proper. The film was distributed by Atlantic Releasing, who also released the other TV show-based films The Smurfs and the Magic Flute and He-Man and She-Ra: The Secret of the Sword, on May 25, 1986. The film received mixed reviews and only pulled in $6.6 million at the box office.

For the show’s final season, ABC decided to change things up in order to reinvigorate its popularity and ratings. The series was moved from the Bigg household to have Tom, Lucy, Dinky, Ashley and Grandpa accompany Henry and his family on a trip around the world. Frank, Helen, Hunter and Peterson were all written out, and David Wagner replaced Freberg as the voice of Tom. The show was given a new intro detailing their journey, again sung by Cano, as well as a new animation studio in Studio Gallop. The season was written by Olesker, Sandy Fries, Matt Geller, Eleanor Burian-Mohr, Michael Reaves, Michael Maurer and Marc Scott Zicree, making it the first without any participation from Scott.

While the series wasn’t renewed for another season, a second movie was produced, again written by King and directed by Deyries. Liberty and the Littles saw the Littles ending up on Liberty Island in New York City where they discovered another group of small people living in oppression. The movie aired on ABC where it was later split up into three episodes and included in both the third season of the show and in the ninth season of ABC Weekend Specials. When the series was rerun in syndication, half of the third season and several other episodes were not shown.

Tying into the show, Scholastic released a series of easy reader books utilizing the character designs used on the show, as well as a Punch Out Toy Book where cardboard versions of the characters and props could be removed and assembled and a sticker book. Milton Bradley produced a board game that featured a 3D design to simulate the Littles’ habitat. Internationally, there were costumes, PVC figurines, records and a card game.

Beginning in 1985, Playhouse Video released several versions of Here Come the Littles on VHS, with ABC Entertainment handling the 1991 release of Liberty and the Littles. Here Comes was brought to DVD in 2007 by NCircle Entertainment, which later re-released it in 2009 as The Littles Christmas Special. Also in 2007, S’more Entertainment released The Complete Unedited Series with bonus features. Mill Creek Entertainment gained the license to the series and released a new complete series collection without bonus features in 2011. That same year, they also released a Best of collection with 10 episodes. Those same episodes were again released in Mill Creek’s Animal Cartoon Bundle along with episodes of Heathcliff (1984) and The Get Along Gang the following year.

“Lost City of the Littles” (9/17/83) – Henry’s parents discover an ancient Little statue that can hypnotize and summon any Little.

“The Big Scare” (9/24/83) – Henry is made to spend the night in a haunted house as initiation into a bike club, but the other members plan to have some mean-spirited fun with him.

“Lights, Camera, Littles” (10/1/83) – Tom gets jealous of Lucy after the Littles make a film and attempts to get rid of it, but it ends up in Dr. Hunter’s hands.

“The Spirits of the Night” (10/8/83) – The Littles help an elderly blind woman recover the money her husband left to her from her crooked landlord.

“The Little Fairy Tale” (11/5/83) – Henry’s friend runs away when she gets a bad report card and the Littles try to help convince her to go home.

“Prescription for Disaster” (11/12/83) – Henry discovers his visiting relative is abusing prescription medication, and one of the pills gets loose and ends up in Dinky’s food.

“The Little Scouts” (11/19/83) – While camping, the Littles come across a pilot who needs serious medical attention.

“Dinky’s Doomsday Pizza” (12/3/83) – Dinky crashes his glider and has a dream that Henry sells the Littles out to Dr. Hunter.

“The Little Babysitters” (9/22/84) – Henry decides to abandon his babysitting duty to the Littles when his friends invite him out to play football.

“Twins” (10/13/84) – Dinky becomes jealous of the attention the new twins are getting, and does dangerous things to try and get some for himself.

“Looking for Grandma Little” (10/20/84) – Grandpa feels neglected and leaves home while Tom and Lucy try to find him a mate.

“Every Little Vote Counts” (10/27/84) – When the mayor forbids the Littles from visiting the surface, a visiting Little sees his chance to take his place in the next election.

Season 3:
“The Little Amazon Queen” (9/14/85) – In the Amazon, the Biggs search for a missing girl and a diamond while the Littles find an ancient race of Littles.

“Tut the Second” (9/21/85) – In Egypt, Henry and the Littles are abducted when Henry is believed to be the reincarnation of King Tut.

“When Irish Eyes Are Smiling” (9/28/85) – Dinky is captured by an Irishman who believes him to be a leprechaun.

“The Wrong Stuff” (10/5/85) – The Littles end up accidentally sent up into space on a space shuttle.

“Deadly Jewels” (10/12/85) – Henry’s camera case is mixed up with a princess’, and the Littles help her against a plot to steal the crown jewels.

“A Little Drunk” (10/19/85) – Henry discovers his favorite star is an alcoholic, and Dinky ends up getting drunk himself.

“Ben Dinky” (10/26/85) – The Littles learn the Italian Littles are under the oppression of the Roman Empire and Dinky is mistaken for a gladiator.

“The Little Girl Who Could” (11/2/85) – Visiting their cousins in the country leads the Littles into a treasure hunt.

Specials:
“Here Come the Littles” (5/25/85) – Henry befriends the Littles and together they try to stop his uncle from tearing down their home to put up a shopping center.

“Liberty and the Littles” (10/18/86) – The littles crash on Liberty Island and discover an oppressed group of 19th Century little people living there.