The Zeta Project was a spin-off from the Batman Beyond second season episode “Zeta.” It centered on Infiltration Unit Zeta (Diedrich Bader), a synthoid designed to carry out covert assassination missions for the National Security Agency through the use of his holographic disguises. However, it was learned that his creator, Dr. Selig (George Segal & Hal Linden), installed a module in Zeta that gave him a conscience. On his last mission for the NSA, Zeta’s target proved to be innocent and he decided he could no longer kill.

The agency, believing Zeta a dangerous rogue element that joined the terrorist organization he was investigating, Brother’s Day, dispatched a team with the sole purpose of either retrieving or destroying him. It was led by Agent James Bennet (Kurtwood Smith), who strongly believed Zeta was simply reprogrammed by enemies and not an actually sentient being. Under him was the young and egotistical Agent West (Michael Rosenbaum) and Agent Lee (Lauren Tom), who grew to see there was more to Zeta than they believed and began to subtly help him evade capture. When Lee left the team and was subsequently promoted, she was replaced by by-the-book Agent Rush (Erika Alexander & Dominique Jennings). Other foes during the series included the cybernetically-enhanced bounty hunter Krick (Keith Szarabajka & Richard Moll), cyber-hackers Plug (Paul Amendt), Meg (Amy Danles) and Buss (Googy Gress), high-ranking Brother’s Day terrorist Titus Sweete (Robert Costanzo), and his more-advanced counterpart, Infiltration Unit 7 (Bader).

Joining Zeta on his adventures was 15-year-old orphan Rosalie “Ro” Rowan (Julie Nathanson). Initially seeing Zeta as an opportunity, Ro came to care about Zeta and decided to help him on his quest. Zeta also worked to help her locate her biological family. Occasionally, they were aided in their efforts by child genius Bucky Buenaventura (Ulises Cuadra & Blayn Barbosa), a technology whiz. Batman (Will Friedle) also made a singular appearance on the show, aiding Zeta against Infiltration Unit 7.

The Zeta Project debuted on The WB on January 27, 2001 as part of their Kids’ WB! programming block. The series was developed by Robert Goodman, who created Zeta and wrote his debut episode. “Zeta” wasn’t originally intended as a backdoor pilot, but Goodman decided that the concept could make a decent series and, within the year, the network agreed. Zeta’s appearance was reworked to make him appear more human, and he and Bennett’s voices were recast having been originally played by Gary Cole and Joe Spano, respectively.

Although it was part of the DC Animated Universe and produced by Warner Bros. Animation, the series’ first season had a decidedly different appearance than all of the other programs. The scenery was generally very light and the characters lacked any sort of shading, as well had an overall differing appearance from the models seen since the debut of Superman: The Animated Series. The stories themselves also took on a comparatively lighter tonality than the rest of the DCAU. For the second season, the animation was modified to bring it more in line with the other DCAU shows with darker settings, shadows, and a sleeker design for Zeta. The stories were also more action-oriented and intense, increasing the level of danger and excitement in each episode. 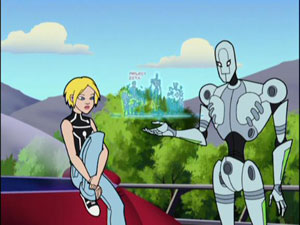 The Zeta Project managed to generate decent ratings and a loyal fanbase despite episodes being constantly delayed to allow the network time to run new--and often failed--programs in its timeslot. The network handed down a mandate that if the production wanted to see a third season, the second had to end on a cliffhanger. They also had plans for the third season that took the show places that Goodman wasn’t completely happy about. All of that proved moot, however, when the network ultimately decided to cancel it at the end of the second season. During its run, it managed to earn four Annie Awards and two Daytime Emmy Awards nominations, and won two Women’s Image Network Awards. Zeta’s debut also earned an Annie nomination.

Zeta and Ro would make one final appearance in the Batman Beyond episode “Countdown” and Zeta as a cameo in Batman Beyond Unlimited #16 before ultimately disappearing into creative limbo. Zeta’s original design, however, would be recycled for the training robots used by the Justice League in Justice League. In 2009, Warner Home Video released the complete first season on DVD. In 2017, Warner Archive re-released the first season and released the second for the first time.

EPISODE GUIDE:
Season 1:
“The Accomplice” (1/27/01) – Zeta is joined by 15-year-old runaway Ro after saving her, and she convinces him to find his creators to help prove his innocence.

“His Maker’s Name” (2/3/01) – Finding one of Zeta’s creators takes him and Ro on a detour with some space hippies, and when they find the scientist he lures them into a trap.

“Change of Heart” (2/17/01) – Zeta and Ro track his creator, Dr. Selig, to a museum but a malfunctioning fusion reactor and the NSA prevent them from making contact.

“Remote Control” (2/10/01) – At a science convention, the brilliant young Bucky takes control of Zeta in order to use him to get revenge over a stolen invention.

“The Next Gen” (2/24/01) – Zeta stumbles upon the mission of another infiltration unit and decides to stop it.

“West Bound” (3/10/01) – The NSA pursues Zeta and Ro on a train just as Zeta’s hologram projector malfunctions, causing him to take the appearance of anyone he sees.

“Hicksburg” (3/31/01) – Ro and Zeta visit her foster family to try and find information on her biological one.

“Shadows” (4/7/01) – IU 7 returns and causes the destruction of a mall Ro and Zeta visits, bringing them to the attention of Batman.

“Crime Waves” (4/14/07) – Zeta and Ro are framed for the kidnapping of the son of a wealthy robotics manufacturer.

“Taffy Time” (5/5/01) – A bounty hunter stakes his claim on Zeta and threatens to kill Agent Lee unless he turns himself over to him.

“Ro’s Reunion” (5/12/01) – Zeta convinces Ro to go on a show that helps people find their families, but soon discovers the show uses fakes and turns runaways back over to the state.

“Absolute Zero” (3/23/02) – Zeta attempts to meet Dr. Selig at a cryogenics lab, but his presence there causes a disruption that results in Selig getting trapped in a freeze unit.

Season 2:
“Wired: Part 1” (3/30/02) – Ro and Zeta encounter a seemingly friendly trio of hackers, but Bucky soon gets word to them that two of them want to strip Zeta for parts.

“Wired: Part 2” (4/6/02) – The NSA captures Zeta and wipes his memory for reprogramming, discovering an unknown module in his head not part of his schematics.

“Hunt in the Hub” (4/20/02) – An associate of Selig’s takes away Zeta’s cred card ability unless he and Ro steal parts for him.

“Ro’s Gift” (4/27/02) – The Brain Trust witnesses Zeta, disguised as Ro, take down a robot and end up kidnapping the real Ro in order to get her to join their group.

“Quality Time” (7/13/02) – Bennet has to join forces with Zeta in order to rescue his son and Ro from a damaged submarine.

“Resume Mission” (4/13/02) – Jason Foley unknowingly helps reactivate IU 7, allowing him to reassemble himself and resume his mission to destroy Zeta.

“Lost and Found” (5/11/02) – Zeta malfunctions while escaping from Krick and recalls his final mission before going rogue.

“On the Wire” (7/20/02) – Bucky reunites Ro with her brother, a reporter, whose boss recognizes her and decides to get an exclusive on Zeta’s capture.

“Cabin Pressure” (7/27/02) – Zeta and Ro have to rescue Bucky from the NSA, his having been captured under suspicion of working for a terrorist group.

“Eye of the Storm” (5/18/02) – Genius brothers devise a way to stop tornados, but the younger of the two attempts to stop one on his own to escape his brother’s shadow.

“The Hologram Man” (8/10/02) – Zeta and Ro finally find Selig and learn the module is Zeta’s conscience, but Tidus Sweete destroys Selig’s lab and seemingly kills him in the process.
Posted by Chris Buchner at 8:01 AM