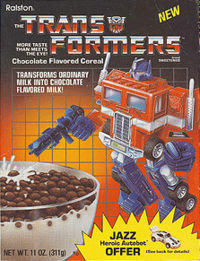 In 1984, Hasbro imported the toyline that would become Transformers into North America hoping to duplicate the success of their recently-revived G.I. Joe line. Transformers followed the consistent battle between the Autobots and Decepticons; humanoid shape-shifting robot aliens that took on the forms of various vehicles, objects and animals. Duplicating that formula, the concept behind the toys was fleshed out and published in comic form by Marvel Comics, and Marvel Productions and Sunbow Productions produced an animated series.

Also returning was Ralston with the license to produce a cereal based on the toys, much as they had with G.I. Joes Action Stars cereal. The cereal would have been chocolate flavored, with the box touting that it would “transform ordinary milk into chocolate flavored milk.” Additionally, the panels of the box would feature robotic limbs and a head that could be cut out and folded in such a way to turn the box into a generic Transformer. The box, which resembled the toy packaging, featured Autobot leader Optimus Prime on the front with a spoon at the ready, and a mail-away offer a Jazz figure.

At least, that was the plan. The cereal was set for release in 1986, but because the Transformers franchise was steadily losing steam in the American market, Ralston decided to cut their losses and cancelled the cereal’s release. The cereal never made it past the test box phase, and those boxes have turned up on eBay from time to time fetching high prices.
Posted by Chris Buchner at 8:04 AM