MYTHIC WARRIORS: GUARDIANS OF THE LEGEND

The 90s were an interesting time for Greek Mythology. Renaissance Pictures was producing three shows incorporating it, Hercules: The Legendary Journeys, Xena: Warrior Princess, and Young Hercules, and Disney had spun off their Hercules movie into the prequel series Hercules: The Animated Series. They would soon find themselves joined by yet another series based on the material: Mythic Warriors: Guardians of the Legend.

Produced by Nelvana, Ltd. and Marathon Media, the series was based on the award-winning Scholastic book series Myth Men: Guardians of the Legend. Written by Laura Geringer Bass with illustrations from Peter Bollinger, based on an original concept by Mireille Chalvon, the eight books were retellings of Greek myths in an easy-reader format as a way to get kids interested in the subject matter. Bass gave the stories a modern flair; such as alterations that depicted the female characters in a more positive light as heroic characters unto themselves and not merely damsels in distress or prizes to be won as initially portrayed. And, of course, some of the content of the original stories (rife with murder, adultery, betrayal and so on) was softened for the intended reading audience. The books were released between 1996 and 1997.

Like the book series, Mythic Warriors was presented in an anthology format with a different set of characters each week (in some instances, the Roman version of character names were used rather than the Greek versions). Amongst the featured mythological characters was strongman demigod Hercules (Lawrence Bayne) and his companion, Iolaus (Daniel DeSanto); Jason (David Orth) and the Argonauts and their quest to retrieve the Golden Fleece; Ulysses (Roger Honeywell) and his escapades in the Trojan War; Helen of Troy (Kristina Nicoll), whose abduction by Prince Paris of Troy (John Ralston) led to the Trojan War; Andromeda (Caroly Larson), whose mother’s boasts about her beauty led to her to become targeted by the gods; Atalanta (Larson & Natalie Brown), who was abandoned in the wild at birth for not being the son her father, King Iasus, wanted; Pandora (Terri Hawkes), keeper of the box of evils; wrestling brothers Castor (Rod Wilson) and Pollux (Jonathan Malen) who often donated their winnings to the poor; and King Midas (Benedict Campbell), who was granted the ability to turn whatever he touched into gold, amongst others. The only being featured in every episode was the narrator, voiced by James Blendick.

The gods were depicted in the show as being giant-sized humans, possessing immortality, the ability to fly and teleport, magical powers, and the ability to change their appearance and shape at will. An echo would be present whenever they spoke in their true forms. Amongst those featured were Zeus (Gary Krawford), king of the gods; Hera (Janet-Laine Green), his queen and goddess of the sky, marriage and childbirth; Hades (Norm Spencer), ruler of the underworld; Demeter (Linda Sorenson), goddess of fertility and the harvest; Poseidon (Francis Diakowsky), ruler of the sea; Hermes (Richard Clarkin, Stephen Bogaert & Blendick), the messenger of the gods; Athena (Wendy Thatcher & Lally Cadeau), goddess of wisdom, warriors and reason; Ares (Rick Bennett & Allen Stewart-Coates), the god of war; Apollo (Jesse Collins), the god of light, art and medicine; Artemis (Elizabeth Hanna), the goddess of the hunt; Hephaestus (David Hemblen), blacksmith of the gods; Aphrodite (Wendy Lands), the goddess of love and beauty; Dionysus (Stephen Ouimette), the god of wine and intoxication; Helios (Bob Zidel), the sun god; Eros, the god of lust, and Persephone (Meghan Black), the goddess of Spring and queen of the underworld. The eternal enemies of the gods, the Titans, were also featured, as was a variety of monsters such as the cyclops, the sirens, Medusa (Jennifer Dale) and the Minotaur.

Mythic Warriors: Guardians of the Legend debuted on CBS on November 7, 1998 as part of the Nelvana-run programming block, CBS Kidshow. It was supposed to debut two months earlier in September with the traditional start of the new television season, but was delayed due to “complicated animation techniques”. Despite not being a ratings success, the show was renewed for a second season. The entire series was written by story editor Kathy Slevin and Peter Colley, with music provided by Varouje. Dr. Miki Baumgarten served as the educational consultant, ensuring that the show met the network’s FCC requirement for educational programming. Along with adapting the eight books, 18 additional adventures were also crafted for a total of 26 episodes across both seasons. At the end of each episode, a 30-second informational segment was shown where the characters would talk about solutions to modern day problems facing the viewing audience. Hong Guang Animation, Co., Ltd. handled the animation duties. 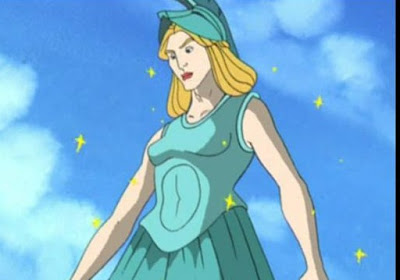 For the new season, several changes were made to a couple of the gods. Hades’ attire was slightly altered, Persephone was aged from a teenager to a fully-grown woman, Aphrodite was changed from a giggling teenager to a mature woman with an entirely different voice and manner, and Athena went from a blonde wearing silver armor to a brunette wearing a red dress with a cape, arm bands and shin guards.

Mythic Warriors continued on in reruns throughout 2000 until September 9, when Nelvana’s agreement with CBS came to an end and CBS’ agreement with Nickelodeon began for the Nick on CBS programming block. The first season was made available to stream on Amazon Prime Video.


EPISODE GUIDE:
Season 1:
“Andromeda: The Warrior Princess” (11/7/98) – Andromeda turns to Athena when her father won’t permit her to join his army.

“Hercules and Iolas” (11/14/98) – Iolas seeks to become a hero like Hercules and begins to follow him on his adventures.

“Ulysses and the Journey Home” (11/21/98) – Ulysses just wants to return home from the war in Troy, but there are plenty of threats he must overcome on his journey.

“Perseus: The Search for Medusa” (11/28/98) – Perseus is goaded into retrieving the head of Medusa to prove that he’s a demi-god.

“Jason and the Argonauts” (12/5/98) – Jason launches an expedition for the Golden Fleece in order to reclaim his throne from the evil King Pelias.

“Persephone and the Winter Seeds” (12/12/98) – When Persephone is tricked into remaining in the underworld, her mother Demeter tries to rescue her from Hades’ clutches.

“Ulysses and Circe” (12/26/98) – Ulysses and his men take a respite on a mysterious island where the evil sorceress Circe turns his men into animals.

“Atalanta: The Wild Girl” (1/2/99) – When Atalanta and Prince Meleager meet and begin to fall in love, a jealous Artemis sends the Calydonian Boar to destroy her.

“Prometheus and Pandora’s Box” (1/9/99) – Prometheus is chained to a rock by Zeus for his defiance in giving man fire, and Pandora is given a box she can never open.

“Bellerophon and Pegasus” (1/16/99) – Athena gives Bellerophon a golden saddle in order to allow him to get Pegasus to help him defeat the fire-breathing Chimera.

“Theseus and the Minotaur” (1/23/99) – Learning that his father is forced to feed people to the Minotaur, Theseus vows to kill it and save the people.

“The Labors of Hercules” (1/30/99) – After Hercules accidentally destroys a village, Iolas tries to reignite his heroic spirit.

“Ulysses and the Trojan Horse” (10/2/99) – King Menelaus tasks Ulysses and his army to retrieve his unfaithful wife Helen from Prince Paris of Troy.

“Ulysses and Penelope” (10/9/99) – Ulysses returns home only to discover that his family has decided him dead and have seemingly moved on.

“Cadmus and Europa” (10/23/99) – Cadmus is tasked with watching over his sister Europa, who believes that a white bull would take her away to find her destiny.

“Jason and Medea” (10/30/99) – Medea has Jason’s mentor Chiron killed in order to crush his spirit and foil his quest to obtain the Golden Fleece.

“Damon and Pythias” (11/6/99) – Damon puts his life on the line so that his friend, Pythias, can say goodbye to his family before his execution.

“Castor and Pollux” (11/13/99) – The brothers are torn apart when King Pelias convinces Castor to go after Jason for the reward.

“The Hounds of Actaeon” (11/20/99) – When ruthless hunter Actaeon hunts Artemis’ prized white stag, she turns him into one until he can learn to love and respect the helpless.

“Phaeton: The Chariot of Fire” (11/27/99) – Phaeton is convinced to “borrow” Helios’ sun-chariot for a race, despite Helios’ warnings that he wasn’t ready to drive it yet.

“Androcles and the Lion” (12/18/99) – Enslaved Androcles learns the ways of the lion in order to maintain his freedom once it’s acquired.

“King Midas: The Golden Touch” (1/15/00) – Dionysus gives Midas the golden touch to reclaim his fortune and hunt down its thief, which turns out to be his own daughter.

“Hercules and the Titans: The Last Battle” (1/22/00) – Angered over not being allowed in Olympus, Hephaestus frees the Titans to reignite the war between them and the Gods.