Rainbow Butterfly Unicorn Kitty (not to be confused with Unikity from The LEGO Movie franchise, although you’d be forgiven for doing so) is a product and media line from Funrise Toys. The animated show followed the adventures of Felicity (Allegra Clark), a sassy and fearless magical cat who was part rainbow, part butterfly and part unicorn (possessing rainbow coloring, butterfly wings and a horn as a result). She was able to tap into each aspect of herself by summoning three magical medallions by chanting her name and hitting one of them, transformer her fully into that aspect and enhancing those related abilities. For instance, hitting the butterfly one would elongate her body and grow her wings, giving her quick air speed.

Felicity lived in the city of Mythlandia which was, as the name implied, populated by mythological and fairytale creatures such as wizards, giants, dragons, and more. Her best friends included Miguel (Arturo Sandoval), a blue Anubis chihuahua who was down to earth and energetic; Athena (Katie Leigh), a book-smart owl who spoke in monotone; and Yana (originally Betti, voiced by Laila Berzins), a ditzy Yeti that lived in a giant snowglobe. Other characters included the Sun (Michael Sorich), who liked to comment on the goings on below him and could turn into the moon at night; Rudy (Chase Mitchell), a rat who pretended to be a rabbit and often caused trouble for Felicity and her friends; Timmy (Rich Magallanes), a Kraken who also liked to cause trouble; the Sand Crab Man (Doug Stone), a nightgown-wearing sand crab who put the citizens of Mythlandia to sleep every night; Moona (Sara Cravens), a cow who ran the Mythic Malts malt shop where Felicity and her friends liked to hang out; Chippy (Cristina Vee), a chipmunk-like creature; Andy (Kyle Hebert), a dragon; and more.

Originally, Saban Brands was set to produce the animated series but those plans were abandoned when Saban sold off most of its properties to Hasbro in 2018. Funrise, who was tapped by Saban to handle the show’s merchandising, acquired the full rights through their newly-formed entertainment division. After being postponed from fall 2018, Rainbow Butterfly Unicorn Kitty aired a sneak peek January 27, 2019 on Nickelodeon before beginning its official run the next day on Nicktoons. It returned to Nickelodeon on February 10th where its title was shortened to RBUK and the intro cut until going back to Nicktoons on June 21st where it finished out its run with the original intro restored. Each episode was 11-minutes in length, with two combined to form a single half hour until the second Nicktoons run where each one aired individually. “Merry Mythmas” was the only full 22-minute episode of the series. Jetpack Animation acquired the international distribution rights and the show began appearing on Nickelodeon’s international channels and branded programming blocks later in 2019.

Rainbow Butterfly Unicorn Kitty was developed by Magallanes (who also heads Funrise’s entertainment division) with Mark Palmer. The series was primarily 2D animation with photorealistic elements and other mixed media thrown in; such as a picture of a real kitten hanging in Felicity’s house (which also represented her kitty powers at one point) and a live-action human face being used on The Sun. Bardel Entertainment handled the primary animation duties while additional animation was supplied by Inspidea. Ray DeLaurentis and Will Shifrin served as the story editors and primary writers, along with Magallanes, Palmer, Andrew Zuber, Gene Grillo, Lissa Kapstrom, David Grubstick, Greg Grabianski, Dani Michaeli, Jordan Gershowitz, Kris Marvin Hughes, Grant Levy and Dominik Rothbard. Nicolette Davenport and Daniella Selmi handled character designs. The show’s them was written, composed and performed by Naom Kaniel, with Magallanes contributing to the lyrics. The rest of the music was composed by Matt McGuire and Kaniel.

In February of 2019, Funrise announced their product line tying into the cartoon. Funrise debuted their line at that year’s New York Toy Fair, which included action figures, playsets, roleplay gear, plush toys and bobbleheads. In addition, they partnered with Freeze and Mad Engine for apparel; Berkshire Fashions for headwear, cold weather and hosier; HER Accessories for accessories; American Marketing Enterprises, Inc. and Briefly Stated, Inc. for sleepwear; Handcraft for underwear; Dreamwave for swimwear; Fast Forward for backpacks; Franco for bedding; Kittrich for stationary; Taste Beauty for cosmetics; Amscan for party supplies and costumes; Zak! Designs for plates and water bottles; and CSS Industries for seasonal items. 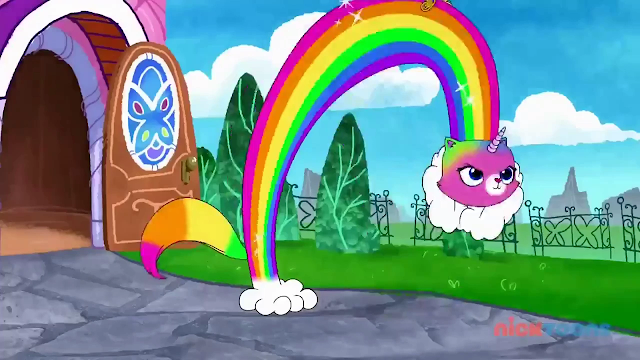 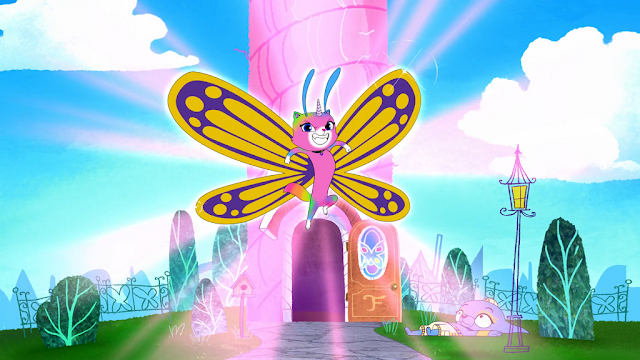 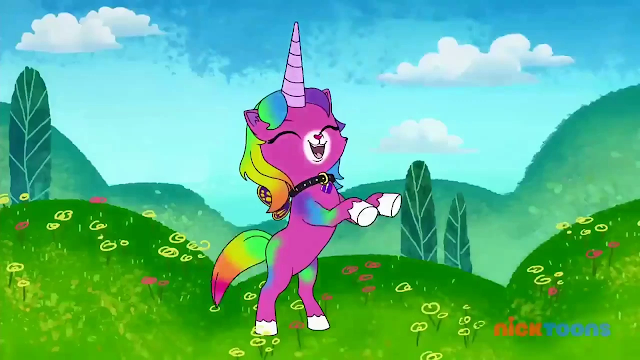 A second season for Rainbow Butterfly Unicorn Kitty had not been ordered despite the show doing well for Nickelodeon and Funrise, nor had it been officially cancelled. Funrise continues to oversee the production of new merchandise related to the character. While no home media has been released as yet, episodes were made available to view on the Nickelodeon app.

EPISODE GUIDE:
“Purrfect Party / Anubis Newbie” (1/27/19 & 1/28/19) – Felicity is worried that her powers won’t measure up to the powerful guests coming to her party. / Anubis tests Miguel to see if he’s ready to become king of the underworld.
“Catlantic City / Scaredy Cat” (1/29/19) – Miguel is locked up in the pound for being a dog when Felicity brings him to Catlantic City. / Felicity and her friends must get through the Phobia Forest to use their free cupcake coupons.
“It Takes Two to Talent / Pot Luck” (1/30/19) – Felicity and Miguel have trouble coming up with an act to win a talent show and get malts named after them. / Felicity and Miguel help a leprechaun figure out his purpose in life.
“Sleeping Yeti / The Sand Crab Man” (1/31/19) – Felicity and Miguel must figure out how to wake Yana up from a witch’s spell. / Felicity doesn’t want to stop having fun so she convinces the Sand Crab Man to take a night off, causing chaos around the land.
“The Lock Mess Monster / Mighty Meow and Super Lucha” (2/1/19) – Because of his messy house, the Loch Mess Monster moves in with Miguel. / Pretending to be superheroes causes Felicity and Miguel to attract a real supervillain.
“Rainbow Butterfly Unicorn Cupid / The Green-Eyed Monster” (2/10/19) – Moona decides to close Mythic Malts. / Miguel invites Chippy on his and Felicity’s friend-iversary, but Chippy isn’t what she seems.
“Gone with the Wand / Fountain of Too Much Youth” (2/17/19) – Felicity and her friends have some fun with a wand while searching for its owner. / Miguel needs to get younger to be able to order his favorite malt after it’s been moved to the kid’s menu.
“Nobody’s Purrfect / Mythic Mounties” (2/23/19) – Felicity tries hard to be perfect with her new kitty collar. / Felicity and her friends join a scouting group but Felicity has a hard time earning a merit badge.
“Snack Attack / The Backward Bug” (3/2/19) – Felicity heads to the factory to investigate the sabotaging of her favorite snack. / When Miguel and Athena are bitten by the Backwards Bug, they can only speak backwards.
“Denzel in Distress / Meanotaur” (3/9/19) – Felicity and Miguel set out to rescue Prince Denzel, held captive by his evil brother, Larry. / Felicity’s friends try to help her retrieve her favorite toy from the yard of her neighbor: the Meanotaur.
“Palace of the Powerless / My Fair Yeti” (3/16/19) – Felicity and Miguel attend a costume party where they end up having to help retrieve some stolen powers. / Yana is afraid she’ll make a fool of herself at a fancy social event.
“The Boaracle / Out of the Box” (3/31/19) – The Boaracle’s predictions about Miguel all come true! / Jealous of her viral unboxing videos, Rudy slips Pandora’s box into Felicity’s house.
“A Big Baby / Mythic Macaroons” (4/7/19) – Babysitting a baby giant turns out to be harder than Felicity and Miguel thought. / Felicity’s Mythic Mounties troop sells cookies to save their favorite park.
“Rudy Awakening / Bound to Be Friends” (4/14/19) – Rudy is worried people will discover he’s not really related to the Easter Bunny. / Magical friendship bracelets stick Felicity and Miguel together until they can prove they’re really best friends.
“The Return of Mighty Meow and Super Lucha / Grumplestiltskin” (4/28/19) – Felicity accidentally frees her evil mirror image. / Felicity throws a big party to celebrate her Cat-ceanara, marking her transition to cathood.
“The Trouble with Travis” (6/21/19) – Felicity must find the previous master of a Genie so that he can make his unused wish and allow the Genie to grant more.
“Tooth por Consequences” (6/28/19) – Someone has stolen the gold coins the Saber Tooth Fairy usually leaves for teeth.
“The Boogie Man” (7/5/19) – Preparation for a dance competition gives Felicity nightmares about the Boogie Man.
“The Souper Monster” (7/19/19) – Felicity picks up some magic beans to help Miguel win the annual cook-off.
“The Winky” (7/26/19) – Felicity is overwhelmed by the responsibility of owning her first pet.
“Trivial Per Hoot” (8/2/19) – Athena’s confidence is shaken when she gets her first fact about Mythlandia wrong.
“Small Change” (8/9/19) – Babysitting a changeling gives Felicity questions about what she’s meant to be.
“Rip Van Stinkle” (8/16/19) – After helping a stinky fellow out, he vows to be at Felicity’s service for life.
“Excali-Burt” (8/23/19) – Felicity is given a magic castle when she pulls a talking sword out of a stone.
“Ratted Out” (8/30/19) – Rudy begs to be Mighty Meow and Super Lucha’s sidekick.
“Just Add Sprinkles” (9/8/19) – Felicity asks a mischievous pixie to make her malts delicious.
“The Write Stuff” (9/15/19) – Felicity’s new pen makes whatever it writes a reality.
“Smart Cookie” (9/22/19) – Yana eats a cookie that will make her smarter.
“Disappearing Act” (10/13/19) – Miguel’s new trick causes him to become completely lost.
“Bumblebee Magnetic Karaoke Hippo” (10/20/19) – Felicity helps a creature learn his true potential.
“Time Out” (11/3/19) – Felicity borrows Father Time’s watch so she can stop time and avoid her doctor’s appointment.
“Playing the Piper” (11/10/19) – Playing a particular song at a rat convention makes Miguel insanely popular with all the visiting rats.
“Shrinking Yeti” (11/17/19) – Yana is gifted a painting that causes her to shrink.
“Little Monster / The Great Mighty Mythic Marathon” (11/24/19) – Timmy asks Felicity and Miguel to babysit his nephew. / All of Mytlandia competes to win the ultimate prize.
“Merry Mythmas” (12/1/19) – Santa Paws tasks Felicity with delivering this year’s presents while Rudy and Timmy plot to ruin Mythmas.
Posted by Chris Buchner at 8:01 AM