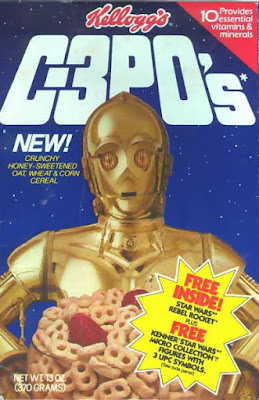 On May 25th, 1983, the (then) final film in the original Star Wars trilogy was released: Returnof the Jedi. The galactic soap opera had come to a conclusion, even though Star Wars mania was still riding high with wave after wave of merchandising. However, one particular type of merchandise had been ignored until the following year when Kellogg’s released the first Star Wars-themed cereal: C-3PO’s.

Named for the golden droid seen in almost every Star Wars media, C-3PO’s was a honey-sweetened cereal in the shape of small figure eights. The promotion for the cereal said the cereal shape was in order to give a double crunch in every bite. Touted as a healthy cereal, it was heavily promoted with an intricate commercial featuring C-3PO himself (Anthony Daniels) and R2-D2 taking refuge from an Imperial attack with some C-3PO’s. Supermarkets also received a life-sized standee of C-3PO pitching the cereal to display with it, which has become something of a collector’s item over the years. Along with average-sized boxes, it was available in small single-serving sizes included in multi-cereal packs.

The cereal had a number of different premiums during its run. One mail away offer featured miniature figurines that were originally part of the failed Microworld playsets by Kenner.  Inside the boxes came either generic plastic rocket shooters with Star Wars-themed decorative cardboard attachments and characters, or trading card/stickers featuring various characters and scenes from the movies (the Canadian version had the stickers and cards separate). Some boxes featured cut-out character face masks on their backs, including Luke Skywalker, Darth Vader, Chewbacca, a Stormtrooper, Yoda (only in the United States) and, of course, C-3PO. Mail-away offers for a C-3PO poster were also included inside the boxes.

By the time the cereal hit shelves Star Wars’ popularity had begun to wane. Faced with that, and more appealing tie-in merchandise, the comparatively basic cereal didn’t last long on store shelves. However, Star Wars fans still remember the cereal fondly and continue to buy and trade closed boxes on a regular basis.