THE HISTORY OF STAR WARS 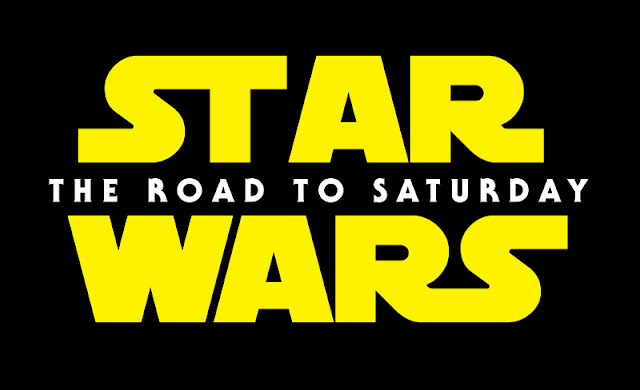 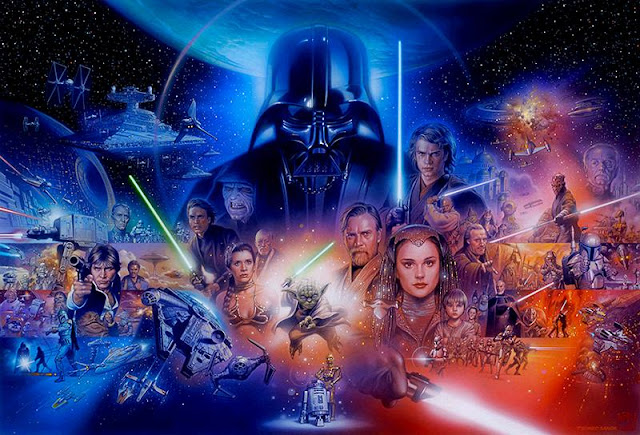 Unless you’ve been living in seclusion for your entire life, chances are you’ve heard of Star Wars; George Lucas’ epic space opera that takes place a long time ago in a galaxy far, far away. The film series followed the Rebel Alliance as they repelled the advancement and rule of the evil Galactic Empire. The story behind the movies is as expansive as the saga itself, but we don’t want to get into all that at this particular juncture (you can find dozens of books about it if you really want to get deep into it). But, for our purposes, a brief history lesson:

Lucas had tried unsuccessfully to get the rights to Flash Gordon to make his own film about the character (which happened without him in 1980). That failure led to his concocting his own space epic: The Star Wars. He had entered into a two-picture agreement with Universal Studios to produce American Graffiti and Star Wars. While Graffiti was released in 1973, Star Wars was rejected in its early concept stages. Lucas spent the next several years expanding and revising his concept until he finally got a workable shooting script. During this time, Lucas began to realize he was crafting the second of three trilogies needed to contain and tell all the story and backstory he was envisioning.

After Universal’s initial rejection of the concept, Lucas and producer Gary Kurtz presented the idea to several more studios that were put off by the potentially high budget it would require to make. Alan Ladd, Jr., the head of 20th Century Fox, believed in Lucas and financed the picture. The first film was released on May 25, 1977 to critical acclaim and financial success. The Empire Strikes Back and Return of the Jedi would follow in 1980 and 1983, respectively, making what has been regarded as the greatest movie trilogy of all-time.

Before the two sequels, however, Lucas licensed out his characters and concept to CBS who went on to produce a special variety show called The Star Wars Holiday Special. Airing on November 17, 1978, the special featured the entire original cast and introduced some new characters that would make their way into future movies; notably the Imperial bounty hunter Boba Fett (Don Francks) in a sequence animated by fledgling Nelvana, Ltd. Nelvana was contracted by Lucas personally for the task after the animation aficionado was introduced to their work by uncredited Special director David Acomba. The special, while proving to be a financially successful venture, was maligned by critics and disavowed by Lucas himself, apart from the Fett sequence. The special had never been rerun nor officially released as a result.

The franchise’s next venture into television came in the form of two television movies starring the teddy bear-like Ewoks from Return of the Jedi.  This time, Lucas exerted full creative control and even wrote their stories. The Ewok Adventure (also known as Caravan of Courage: An Ewok Adventure) was broadcast on ABC on November 25, 1984, with Ewoks: The Battle for Endor following a year later. The specials were well-received, with the first getting two Primetime Emmy Award nominations and winning one. 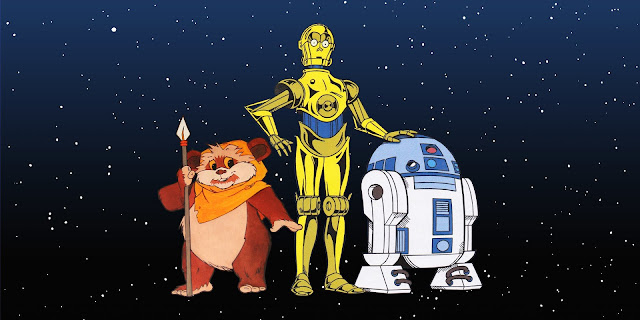 With Lucas feeling technology had not yet reached a point to allow him to continue his space epic without serious compromise, he had suspended his sequel movie trilogy indefinitely and decided to focus on a new venture: animation. Thus Star Wars made its journey into Saturday Mornings…
Posted by Chris Buchner at 8:01 AM