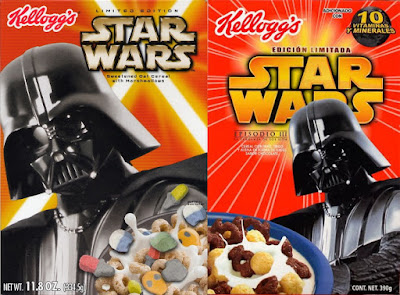 With George Lucas’ second trilogy, and possibly the franchise, winding down with the 2005 release of Star Wars Episode III: Revenge of the Sith, Kellogg’s had one last chance to get out a cereal tie-in related to the franchise. Along with plastering the movie’s name and imagery on their various products as well as offering mini lightsabers and light-up saberspoons, Kellogg’s produced a limited edition Star Wars Episode III cereal. 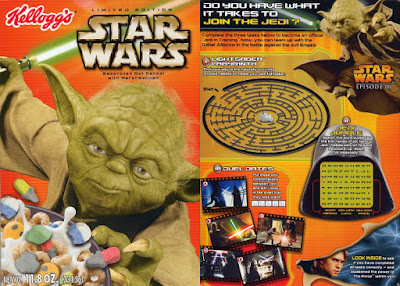 The American version of the cereal featured sweetened oat rings intermixed with marshmallows. The marshmallow shapes were similar to General Mills’ previous Episode II cereal effort which also included lightsabers (exchanging a yellow energy blade for the previous blue), R2-D2 and Yoda. New for this edition were the shapes of Darth Vader and C-3PO. The Mexican version of the cereal, however, featured only sweetened corn balls mixed with chocolate TIE fighter pieces. It was offered in 780 and 390 gram boxes and 30 gram bags.

With both versions of the boxes featured a choice of Darth Vader (Hayden Christensen) or Yoda on the face, the American version initially left the Episode III subtitle off of the cereal name everywhere but on the backs of the boxes along with a game. It wouldn’t be until November when the box was redesigned with a new Darth Vader pose to promote the DVD release of the movie that it would gain the Episode III titling, as well as a new game on the back. The Mexican version had a set of 24 collectible trading cards that could be cut out, with Vader and Yoda’s box each having a different batch of 12.
Posted by Chris Buchner at 8:02 AM