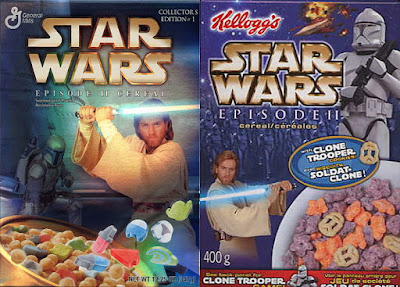 It took 16 years for George Lucas to decide the time was right to bring his long-planned Star Wars prequel trilogy to the masses. Finally, special effects and computer technology had reached the point that would allow Lucas to achieve the epic scale he wanted for his universe. The first of the new films, titled Episode I: The Phantom Menace, was released in 1999 to mixed, though mostly positive, reviews and became a box office success. In 2002, Lucas released the second part of the trilogy titled Episode II: Attack of the Clones. 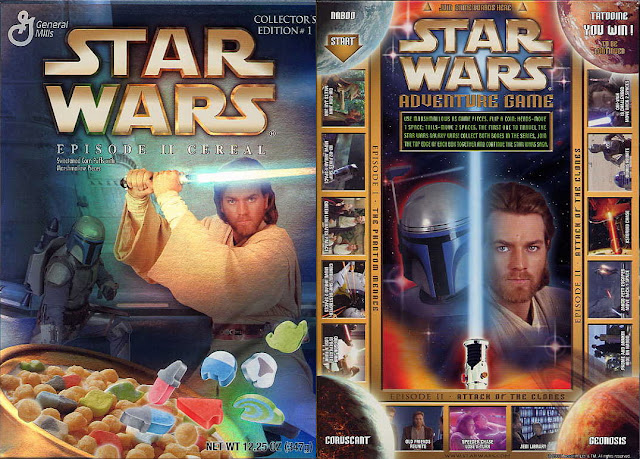 With the second movie came the first tie-in cereal promotion since 1983’s C-3PO’s. However, this time around, two companies were producing very different kinds of cereals. In North America, General Mills’ cereal was initially going to be called “Episode II Clone Crunch” with box art featuring Obi-Wan Kenobi (Ewan McGregor) and Jango Fett (Temuera Morrison). Instead, they went for a generic cereal name and featured two foil-enhanced boxes with different images: one with Anakin Skywalker (Hayden Christensen), Padme Amidala (Natalie Portman) and Count Dooku (Christopher Lee), and the other with new poses for the original design. Both fronts were used for either side of the deluxe two-bag version found in big box stores with only the logo foil-enhanced. The cereal was essentially their Kix brand with marshmallows in the shapes of Yoda, R2-D2, a Jedi Starfighter, Slave I, a Clone Trooper and red and blue lightsabers. The boxes also featured a game on the back panel.

Over in Canada, Kellogg’s held the license. Choosing to ignore General Mills’ flashy take on the cereal, they instead went simple. It came with basic purple and red star-shaped pieces along with “cookies” that represented a Clone Trooper mask. The box also featured Kenobi and a Clone Trooper in front of an entire legion as a battle raged overhead, and had a game on the back panel. However, Kellogg’s did have their own gimmick as they offered two boxes of the cereal packaged together with a life-sized Clone Trooper mask.
Posted by Chris Buchner at 8:00 AM