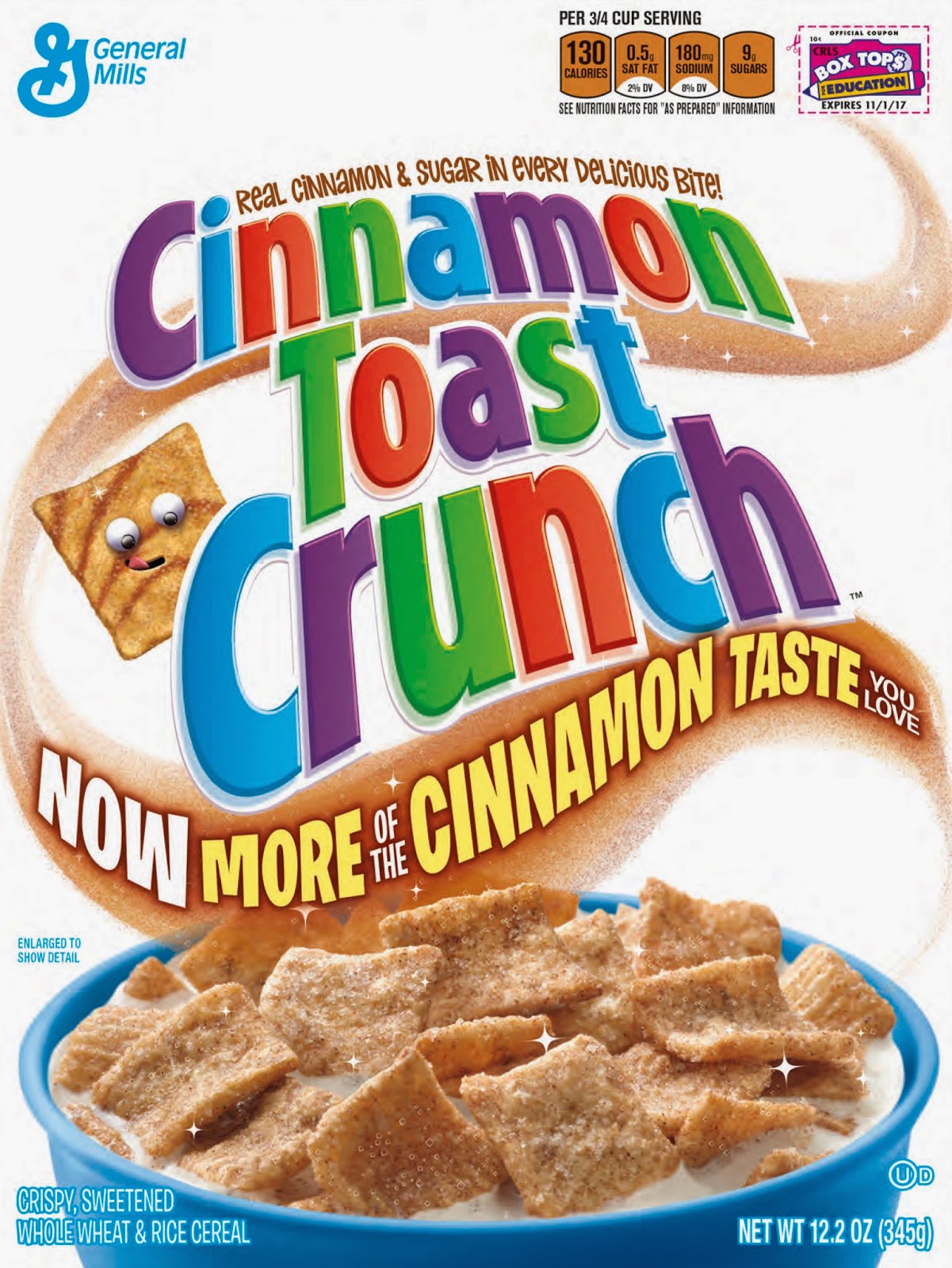 Hitting shelves in 1984, General Mills and Nestle's Cinnamon Toast Crunch (CTC) was a cereal designed to invoke the taste of cinnamon toast (hence the name). The cereal has been produced in square flake form since its inception, gaining only the addition of brown sugar swirls in 1995 that prompted the marketing slogan “The taste you can see.” In 2014, for the cereal’s 30th anniversary, the cereal began being promoted as having “now more of the cinnamon taste you love.”

In 1986, the cereal featured three chef mascots who would each take a turn saying part of the cereal’s name in commercials. Wendell was the eldest, having white hair, a jolly grandpa appearance and glasses. His other two cohorts were never officially named by the company, but had gained the names Bob and Quello by fans that seemed to have unofficially stuck (Wendell’s name was revealed on a 1990 box). Bob was the youngest of the group, with black hair and a stocky build. Quello, who seemed to be the next-ranking chef after Wendell, was tall and thin with brown hair. The three of them adorned the boxes of cereal and commercials until 1991 when, after consumer feedback, General Mills decided to retire the two younger chefs and made Wendell the sole mascot everywhere the cereal was sold outside of Europe.

Over the years, Wendell’s prominence in the commercials began to steadily decline as the ads turned to more gimmicky means to attract attention to the cereal, especially in the adult market. He did, however, remain on the box before new mascots were introduced in 2009: the Crazy Squares. The Crazy Squares were a group of anthropomorphic CTC pieces that found their own taste so irresistible. They were basically portrayed as cannibals always trying to eat each other with the slogan “Crave those crazy squares.” Eventually, they replaced Wendell entirely on all CTC marketing.

1995 saw the debut of CTC’s first spinoff cereal, French Toast Crunch, which lasted until 2006 when it was discontinued. Constant fan outcry led to a comeback in December of 2014. 2003 saw the limited edition release of Monopoly Cereal, which added marshmallows to the CTC formula that resembled the pieces found in the Monopoly board game. In 2004, Peanut Butter Toast Crunch was introduced, adding a peanut butter flavor to the CTC squares. It was discontinued for a time but revived in 2013, complete with Wendell on its packaging. However, Wendell did make a return appearance the year prior when they introduced Frosted Toast Crunch, which added a vanilla flavor to the CTC squares. In 2013, Chocolate Toast Crunch was introduced, giving a chocolate flavor to the cereal squares. For the 2014 holiday season, a limited edition cereal called Sugar Cookie Toast Crunch was released, giving the cereal a sugar cookie taste. The Crazy Squares promoted that one. For the 30th anniversary, General Mills partnered with Tastemade to create cinnamon-inspired recipes by chefs.

The cereal is currently available worldwide, produced by Nestle. In the United Kingdom, it was produced under the name Cinnamon Grahams before eventually becoming Curiously Cinnamon. In French Canada, it’s known as Croque-Cannelle. A variant with a different taste known as Cini Minis is available in other European countries.