THE HISTORY OF ARCHIE

Archie Comics began as MLJ Magazines, formed by Maurice Coyne, Louis Silberkleit and John L. Goldwater in 1939. Their first comic book was Blue Ribbon Comics, which was half full color comics and half red and white tinted. In 1940, Pep Comics debuted, focusing on their patriotic hero The Shield, who pre-dated Marvel Comics’ (then Timely) Captain America by 14 months. Soon, Goldwater would find himself inspired by the Andy Hardy movies and conceived of a strip about a relatable average teenager using people he had encountered on his travels across the country as the basis for the characters.

In Pep Comics #22, 1941, writer Vic Bloom and artist Bob Montana debuted teenager Archibald “Chick” Andrews (the Chick was eventually dropped) and his on again/off again girlfriend Betty Cooper, the typical girl-next-door. Many of the characters’ looks were developed by Montana, taking inspiration from people he knew while attending Haverhill High School in Massachusetts, where the series was originally set. Eventually, the series and characters were moved to the fictional idyllic town of Riverdale, which always remained insulated from things that plagued the world at large (except for the occasional story dealing with those issues). The strip was a success, and a few short years later MLJ officially changed its name to Archie Comics, as well as giving Archie his own book titled (what else?) Archie Comics (the “Comics” part of the title was eventually dropped in the 50s). While their appearances underwent a steady evolution throughout the 40s and 50s, it wouldn’t be until artist Dan DeCarlo joined the company in the late 50s that the Archie house style (or the uniform way in which all Archie comics would be drawn) was established, leading to the characters’ most recognizable looks.

Now, without further ado, let’s meet the citizenry of Riverdale:

Archibald Andrews – As stated above, Archie was the central focus of the stories set in Riverdale until the other characters came into their own. He was inspired by Montana’s high school friend Arnold Daggett. Archie is a friendly, outgoing boy who, while an accomplished athlete, is a bit of a klutz everywhere else. Girl crazy, he has a wandering eye—however, it tends to land mostly on Veronica or Betty. Archie’s two persistent qualities are the fact he’s always broke, and that his car is one pothole away from being a scrap heap (originally a 1925 Ford Model A that was replaced in the 80s by a 1964 Mustang).

Betty Cooper – Based on Montana’s girlfriend from New York, Betty is kind, sweet and caring; always willing to give of her time and help her friends. Initially depicted as obsessed with Archie (who was oblivious to her affections), over time Betty was leveled off to become one of Archie’s frequent girlfriends, second only to her best friend, Veronica. She was also made more of a tomboy, and could easily assemble a transmission as she could bake a cake.

Forsythe P. “Jughead” Jones (Pep #22) – Jug is Archie’s best friend. He’s obsessed with food and can out-eat almost anyone without ever losing his slender figure (except when visually comical). He’s lazy, sarcastic, and is extremely disinterested in girls (originally going so far as to be labeled as a “girl-hater”). Jug’s most distinguishing characteristic is the fact he always wears a crown-like beanie, once known as a whoopee cap that symbolized the wearer was a mechanic. Montana established that he purely imagined Jughead, but his widow Peg Bertholet stated that Montana’s high school friend Skinny Lenahan bore a resemblance to Jughead. 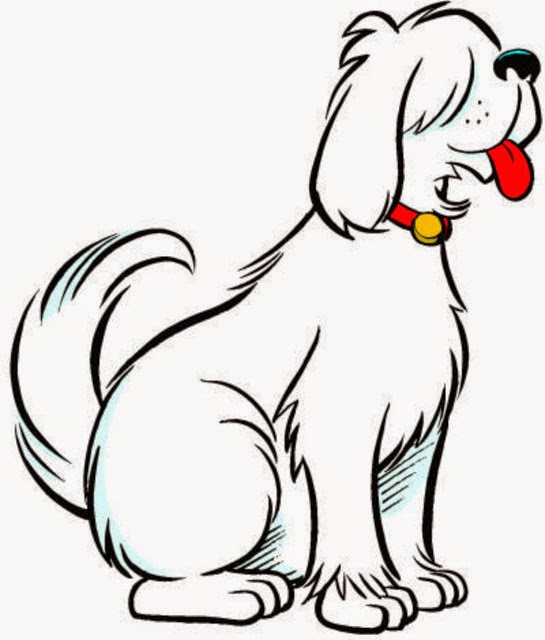 Hot Dog (Pep Comics #224, 1968) – Hot Dog is Jughead’s other best friend. A sheepdog who is as hungry and lazy as his master. Although he doesn’t actually talk, there have been times when his thoughts have become known to readers; particularly on his own adventures. Originally conceived for the first Archie cartoon, Hot Dog was integrated into the comics and frequently switched homes between Archie and Jughead, until it was decided to make his permanent home with Jughead.

Veronica Lodge (Pep Comics #26, 1942) – Betty’s best friend and her primary competition for Archie’s affections. Veronica comes from a very wealthy family and she doesn’t hesitate to flaunt it or her looks. But, while usually oblivious to the plight of the lower classes, she can occasionally exhibit moments of caring and selflessness. Montana based her family on the real life Lodges, a Boston Brahmin political family he once drew a mural for. Veronica’s name came from Veronica Lake. Initially, Veronica and her family had just moved to Riverdale from Boston and later New York, but future stories would have them established as always living in Riverdale.

Reggie Mantle (Jackpot Comics #5, 1942) – Reggie is a prankster from an upper class family who also vies for Veronica’s affections, amongst other girls. The only thing he loves more than girls and making Archie miserable is staring at himself on a mirror or photograph. Much like Veronica, Reggie can sometimes put aside his vanity and show actual moments of caring (which is probably why anyone remains friends with him despite all his nasty tricks). 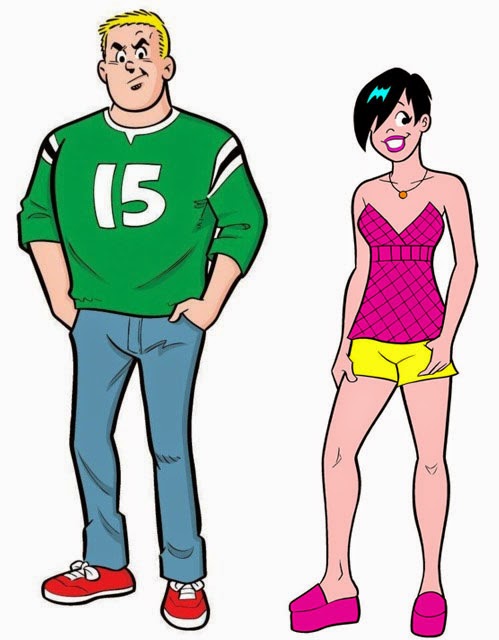 Marmaduke “Big Moose” Mason (Archie’s Pal, Jughead Comics #1, 1949) - Moose is a dim-witted stereotypical jock. He’s the biggest and strongest of Archie’s gang with a short temper, but he also has a good heart. He dates Midge Klump (Archie’s Pal, Jughead Comics #5, 1951), who is the other primary object of Reggie’s affections and often the reason Moose pummels others in a jealous rage.

Dilton Doiley (Archie newspaper strip on February 16, 1948) – Dilton is the youngest of Archie’s friends, having skipped a grade due to his genius-level intellect. Dilton is Moose’s best friend, and a stereotypical nerd who has trouble meeting girls (although he has found a way to do it scientifically a few times). A prototype of Dilton’s character actually appeared as early as Archie Comics #1. Two others, named Theodosious and Dilbert, were introduced in Pep Comics #27 and Archie Comics #34, respectively. 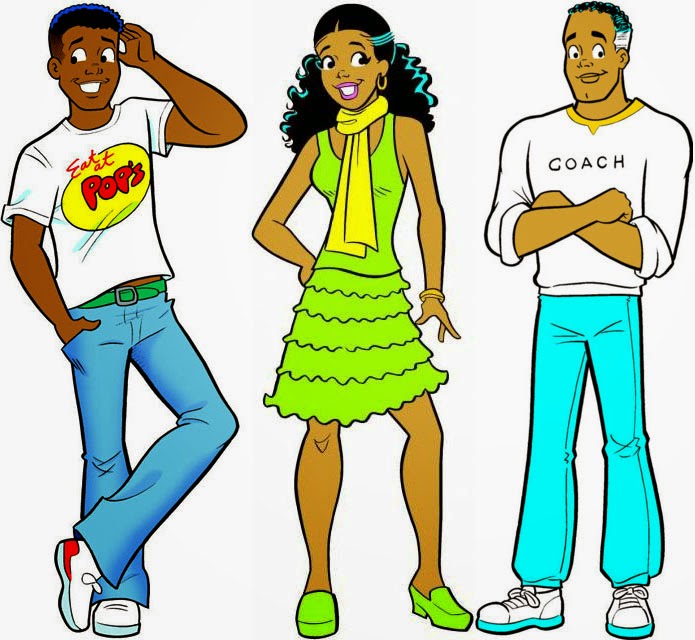 Chuck Clayton (Life With Archie #110, 1971) is an accomplished athlete and cartoonist, whose father, Floyd (Laugh Comics #244, 1971), is one of Riverdale High’s coaches. Chuck’s steady girlfriend is Nancy Woods (Pep Comics #309, 1976), who always finds herself competing for Chuck’s attention with his art. She loves fashion and shopping, plays tennis and softball, and is one of Riverdale High’s cheerleaders. She’s also an artist in her own right, particularly with watercolor paints.

“Big” Ethel Muggs (Archie’s Pal, Jughead #84, 1962) is a tall, gangly, plain girl who has her heart set on making Jughead her boyfriend, much the way Betty was originally depicted towards Archie (however this and her plainness have been lessened as the character evolved). Ethel is a fan of science fiction, art and trains, can cook (which she uses to lure in Jughead) and makes doll-house furniture.

Typical adventures focused on the everyday lives of the characters both in and out of school. Every now and then, a fantastic adventure involving monsters, aliens, and intrigue would find their way into the pages of Archie comics, as well as the occasional parody of popular culture and literature. The citizens of Riverdale managed to capture the hearts and imaginations of their readers, so it was only natural that Archie and friends would make the leap from the comic page to the small screen.
Posted by Chris Buchner at 8:00 AM