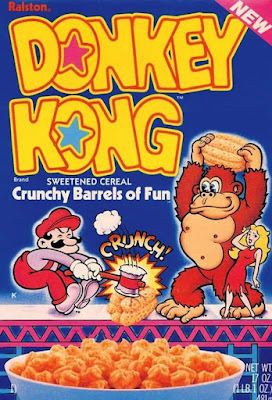 After several failed attempts to break into the American video game market, Nintendo finally scored a hit with its game Donkey Kong in 1981. The game featured the titular ape kidnapping Pauline, the girlfriend of carpenter Mario (later known as a plumber and Nintendo’s mascot). Mario was tasked with rescuing Pauline from Donkey Kong at a construction site, jumping over thrown barrels and fireballs along the way.

The game became incredibly popular and profitable, spawning a diverse line of merchandise featuring the characters. The following year, as Donkey Kong’s first sequel was set to hit arcades, Ralston entered into a licensing agreement with Nintendo to produce a cereal based on the game. Released in 1982, the cereal was shaped like barrels, and those who remember it often compare its taste to that of Cap ’n Crunch. It did not prove as popular as the game and only lasted a year.

The commercials for the cereal were the first animated appearances of Donkey Kong’s characters, as it wouldn’t be until 1983 when the game was adapted to be a part of CBS’ Saturday Supercade. They featured Mario chasing Donkey Kong around a live-action breakfast table as kids looked on. The cereal offered several premiums, including baseball cards and stickers. A sweepstakes allowed kids a chance to win either the Game & Watch version of the game or the actual arcade machine.