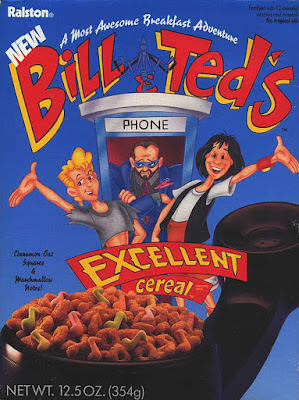 In the future, a perfect society would be forged through the music of two men known as The Great Ones. Of course, first a representative from that future would have to travel back in time via a phone booth to ensure The Great Ones passed their history exam. That was the premise of Bll & Ted’s Excellent Adventure, a 1989 comedy starring Alex Winter and Keanu Reeves as the titular characters, with George Carlin as the representative named Rufus. The movie had a long, rocky road towards release, but it managed to become a box office success.

The following year, the movie was adapted into an animated series produced by Hanna-Barbera Productions for CBS television. Getting their own piece of the action, Ralston-Purina acquired the rights to produce a cereal based on the cartoon. Produced between 1990 and 1991, the cereal featured cinnamon-flavored toasted oat squares and marshmallows in the shape of musical notes. The commercial for the cereal closely matched the style of the cartoons, but the actual voices (being the movie actors) weren’t featured.

The cereal came with a number of themed premiums. The first was a cassette tape tote meant to look like the phone booth. What was interesting about these was instead of being a mail-away premium or located inside the box like most others, it came shrink wrapped to the front of the box. The back panel featured four “historical hysterical” post cards depicting Bill & Ted interacting with some famous people throughout history as only they could. The next promotion was a “Dial-A-Dude” inside the boxes, which was them in the phone booth that featured a pull out list kids could write names and numbers on and see in a special slot at the bottom of the booth. 3 luggage tags, dubbed Time Travel Tags, were the final released premium. The cereal was pulled before the last premium, pencil toppers of Bill, Ted and the phone booth, could be released.

In July of 1991, Winter appeared on the first incarnation of the Arsenio Hall Show to promote the Bill & Ted sequel Bogus Journey. While discussing Winter’s projects, Hall brought up the cereal to Winter, who claimed to love it. Hall proceeded to bring out several bowls of the cereal and had selected an audience member to come down and try it.
Posted by Chris Buchner at 8:03 AM