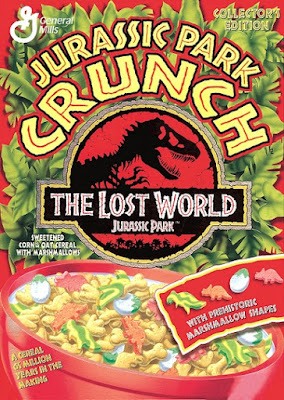 After the success of 1993’s Jurassic Park film, author of the novel on which it was based Michael Crichton was pressured by fans and director Steven Spielberg to write a sequel. In 1995, he released The Lost World and production began almost immediately on the sequel of the same name. Despite mixed reviews, the film was a box office success. 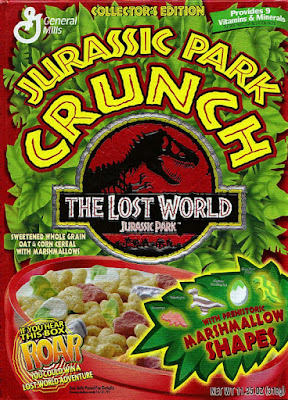 To promote the film, Universal Pictures went all-out with an expensive marketing campaign. One of the items to come out of that was a cereal licensed by General Mills. Called Jurassic Park Crunch, the cereal featured sweetened corn pieces with four two-colored marshmallow pieces shaped as dinosaurs and a hatching egg. The boxes were completely covered in foil and featured a skeleton matching game on the back. Some boxes came with a microchip that let the box “roar” when it was opened, indicating the winner of a trip offered on the box, or a number of other Jurassic Park-themed prizes.
.

Once the film was released and the promotional period ended, so too did the run of the cereal as it left the shelves before the end of the year.
Posted by Chris Buchner at 8:15 AM