After Disney acquired LucasFilm in 2012, they quickly set about cashing in on the company’s biggest franchise: Star Wars. Within the next two years, plans were put in place to continue the movie saga with a new trilogy. December, 2015 would see the release of the first new movie, Episode VII: The Force Awakens. Directed J.J. Abrams, the film reunited the surviving original cast with a whole new set of characters to continue the struggle for the balance of the force in a galaxy far, far away. 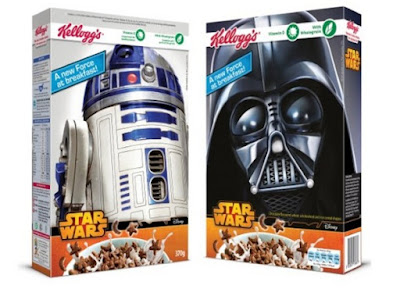 As with Episode II, General Mills and Kellogg’s achieved a shared license to produce a cereal tie-in to the film; General Mills covering North America while Kellogg’s released in the United Kingdom. The Kellogg’s version actually came first, being released in March of 2015. Their cereal featured a dual-faced box with Darth Vader and R2-D2 on either side. The cereal itself was chocolate-flavored whole wheat and rice pieces in the shapes of stars and moons. 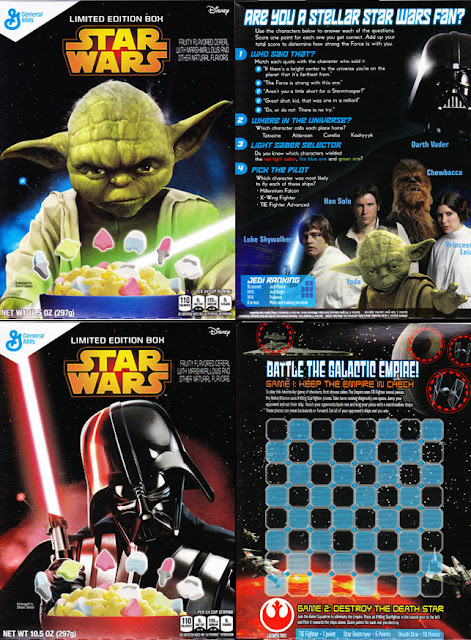 General Mills’ version was first announced on May 4th (also known as Star Wars Day) and released in June. The cereal featured berry-flavored corn puffs meant to resemble X-wings and TIE fighters. Also included were marshmallow shapes mostly recycled from their Episode II cereal a decade prior, including red and blue lightsabers, R2-D2, Yoda and a Jedi Starfighter. The Clone Trooper face was redesigned to better resemble a regular Stormtrooper face by changing up the black areas of the otherwise white piece. The boxes came in two varieties at launch: one featured Yoda with a quiz on the back panel, the other Darth Vader with a Star Wars-themed checkers game on the back. 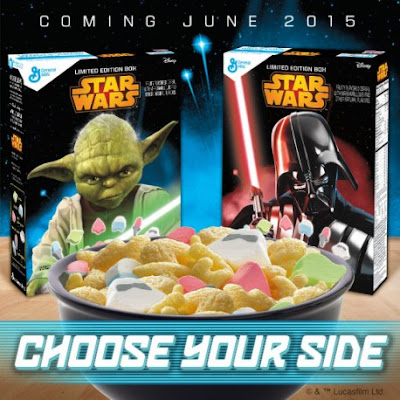 It was announced that new box designs would initially be released in October of 2015 before the movie, but they have been pushed back to February 2016. Instead, General Mills added Star Wars elements to a variety of their other cereals with Droid Viewers inside.
Posted by Chris Buchner at 8:03 AM