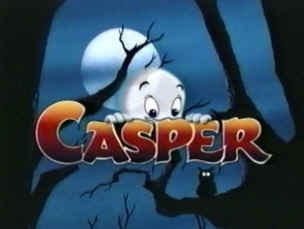 For the history of Casper, check out the post here.

In 1995, Casper made a big return to the public consciousness with the release of his first full-length feature film by Amblin Entertainment and the Harvey Entertainment Company, featuring live-action mixed with computer animated ghosts.

Directed by Brad Silberling from a script by Sherri Stoner and Deanna Oliver, Casper followed greedy Carrigan Crittenden (Cathy Moriarty) and her sniveling sidekick Paul “Dibs” Plutzker (Eric Idle) as they attempted to find a treasure in the run-down Whipstaff Manor she had inherited from her father. The only thing blocking her way was that the house was haunted by The Ghostly Trio: elongated leader Stretch (Joe Nipolte), foul-smelling Stinky (Joe Alaskey) and the aptly-named Fatso (Brad Garrett).

After several failed attempts to remove the ghosts, including an exorcism by Father Guido Sarducci (Don Novello) and paranormal extermination by Dr. Ray Stantz (Dan Aykroyd, reprising his role from Ghostbusters), Crittenden was turned on to the services of one Dr. James Harvey (named after Harvey Comics and played by Bill Pullman), a ghost therapist, through the machinations of the fourth Whipstaff ghost: Casper (Malachi Pearson). Casper, having seen a news report about Harvey, immediately fell for his daughter, “Kat” (Christina Ricci), and figured Crittenden’s greed was his best chance to meet her.

Despite mixed reviews, the film proved a box-office success; although not as much of one as was projected. A sequel movie was planned, but with Pullman and Ricci’s commitments to other projects, the sequel was ultimately scrapped. Fortunately, the producers had already decided to continue the franchise in the form of a new animated series based on the movie, which was announced by Fox Kids head Margaret Loesch months before the film came out. It would be Casper’s third on Saturday mornings and the second based on a movie starring Ricci (the first being 1992’s The Addams Family).

Casper debuted on FOX on February 24, 1996. The series featured most of the movie’s cast returning to voice their respective characters, with Dan Castellaneta and Kath Soucie replacing Pullman and Ricci in their roles. Even Ben Stein, who played Crittenden’s father’s attorney in the film, made an appearance in an episode as a teacher at Kat’s school. Casper hit the top of the ratings and remained there for its first two seasons. The series also earned an Emmy for Bruce Babcock’s score during the second season. Other music was provided by Charles Frenandez, Harvey Cohen, Ron Grant, Michael Tavera and Thomas Richard Sharp. The series’ animation was handled by Akom Production Company.

Changes were naturally made to better transition the movie to the series. All references of Crittenden and how the Harveys arrived to Whipstaff were removed, however Dr. Harvey remained the Ghostly Trio’s therapist. Casper’s attraction to Kat was downgraded to simply being her best friend. Casper was also made a student at a ghost school, which opened up a new set of supporting characters and plot lines. The series was able to reintroduce characters from the Harvey books such as Spooky (Rob Paulsen), a black-nosed ghost who spoke with a Brooklyn accent and wore a derby hat, and Poil (Miriam Flynn), originally introduced as Pearl, Spooky’s blonde-haired dim-witted girlfriend. A new character for the show was Ms. Banshee (Tress MacNeille), a teacher at Casper’s school who often lived up to her name. Kat’s nemesis from the film, Amber Whitmire (Debi Derryberry) was given new sidekicks in the form of three girls named Jennifer (all Sherry Lynn). They were all portrayed as rich, spoiled Valley girl types despite the setting of the show being Maine and not California. Interestingly enough, while the movie pointed out that the four-fingered Casper once had five when he was alive, the cartoon chose to give its human characters the traditional four fingers cartoon characters are often depicted as having.

Many of the people involved with the show had worked on Animaniacs and Pinky and the Brain (including the film’s writers, who also worked on the series), resulting in the show having a very similar style. Set in a sitcom atmosphere, the show featured quick deliveries, pop-culture references, songs and fourth-wall breaking gags. Also like the previous shows, each episode consisted typically of three segments of varying lengths. Additional writers for the show included Michael Merton, Sean Hogan, Alex Borstein, Bob Claster, Ken Koonce, Scott Kreamer, Chris Otsuki and Mark York. When shows ran short, the end credits were often filled with shots of a cemetery with humorous inscriptions on the tombstones and the movie version of Casper’s theme song by Mack David and Jerry Livingston playing over it. The opening titles were simply the Casper logo materializing like a ghost on the screen, typically with a few chords of the theme.

The show was marketed as The Spooktacular New Adventures of Casper during its second season (although only Casper ever appeared on the title screen). For the third season, Jess Harnell would replace Garrett as the voice of Fatso for the remainder of the series and the subsequent live-action direct-to-video movies as Garrett went on to star in the hit sitcom Everybody Loves Raymond. It also aired concurrently on Monday afternoons before eventually being removed from its Saturday timeslot to make way for reruns of Ninja Turtles: The Next Mutation after its original replacement, Ned’s Newt, was delayed.

In February of 1998, the show aired on Fridays in both the morning and afternoon timeslots before being completely removed from the line-up. It ended up on sister channel FOX Family Channel where it played out in both reruns and the final six-episode fourth season. Although Casper was still getting respectable ratings, Saban Entertainment, who took over Fox Kids in 1996, and 20th Century Fox, who had acquired distribution rights, wanted to focus on the live-action sequel films.

From 1996 through 1998, Universal Studios Home Video would release various episodes from the first three seasons onto VHS. In 2007 and 2008, Universal Studios Home Entertainment released two DVDs containing the first and last five episodes of the first season. In 1997, Trendmasters produced a small line of action figures for the show. The first wave featured all four ghosts disguised as humans at various jobs. The next wave, “Hide & Seek Friends”, had the ghosts able to hide inside an included accessory. Finally, there was a Whipstaff Manor playset which featured miniature figures of the ghosts, Dr. Harvey and Kat.

This would be Casper’s last foray into Saturday morning television. Casper would eventually return to film beginning with 1997’s live-action/CGI Casper: A Spirited Beginning with two others following. In 2006, the completely CGI film Casper’s Scare School was spun-off into a new computer animated series.

EPISODE GUIDE:
Season 1:
“Spooking Bee / Fugedaboudit / The Flew” (2/24/96) – Casper and Spooky try to outdo each other in a spooking bee. / Fatso explores his depths in a musical number. / The trio pass their ghost flu to the Harveys, making them think they’re ghosts.

“Paws / The Alphabet Song / Is So Too” (3/2/96) – A ghost puppy follows Casper home, but the trio hate dogs. / Stinkie keeps messing up Stretch and Fatso’s educational song. / Casper follows Kat on a study session with a boy, constantly ribbing her that it’s a date.

“Legend of Duh Bigfoot / The Ghostly Day / Invasion of the UGFO’s” (3/9/96) – A bonding camping trip with James and the trio leads to an encounter with Bigfoot. / Kat recalls visits from scared scientists. / Dinosaur ghost aliens visit Whipstaff.

“Rocket Booster / A Really Scary Casper Moment / Day of the Living Casper” (3/16/96) – Casper tells Kat about the time he went into space. / Casper proves that he can be scary if he wants. / Casper uses Kat’s make-up to pretend he’s human for a day.

“Three Boos and a Babe / The Whipstaff Inmates / Elusive Exclusive” (3/30/96) – A parent-teacher conference leads the trio to falling for Ms. Banshee. / Introducing the primary cast. / A reporter tries to achieve fame by broadcasting the Whipstaff ghosts.

“Paranormal Press / Another Spooky and Poil Moment / Deadstock” (4/20/96) – A bored Casper helps Kat get revenge on Amber and the Jennifers in the school paper. / Poil helps Spooky get into further trouble with Ms. Banshee. / Casper has to fill Whipstaff with ghosts to keep his family from being evicted.

“Poil Jammed / The Who That I Am / A Picture Says 1000 Words” (4/27/96) – Spooky refuses to take Poil to a big shindig. / Casper goes to Dr. Harvey to better himself. / A picture-haunting ghost manages to annoy everyone with his authoritative stance on everything.

“Spooks, Lies & Videotape / Ghostfather” (5/4/96) – Casper tries to show he’s creative by filming a movie to send into a show. / The Trio tries to scare out the Harveys before the Ghostfather pays them a visit.

“Rebel Without a Date / Don’t Bank on It” (5/11/96) – Casper turns to James Dean for help in winning the new exchange student from Spooky. / A new bank puts James in deep debt.

Season 2:
“Grim and Bear It / Fatso of the Opera” (9/7/96) – Casper tries to stall the Grim Reaper from taking James. / Fatso gets the chance to be a famous opera singer.

“Dead of the Class / A Spooky and Poil Moment / Y-Files” (9/14/96) – The Trio’s 150th High Ghoul reunion reveals Stretch never graduated. / Spooky tries to find out what Poil wants to see on TV. / Skully and Moldy try to figure out why everyone but Casper disappeared.

“Aunt Misbehavin’ / Split Personalities” (9/28/96) – The trio change themselves into women to prevent Casper from being taken away. / NO SYNOPSIS AVAILABLE.

“Spooky and Poil Meet the Monsters / You Know You’re Alive When… / 13 Ways to Scare a Fleshie / The Trick’s a Treat” (10/26/96) – Spooky wants to haunt a house, but encounters monsters instead. / How to tell the difference between being alive and dead. / The trio responds to fan mail about how to scare a fleshie. / Casper promotes Kat’s party with the promise of real ghosts, but the union forbids scaring on Halloween.

“Frightening Storm / The Ghostly Trio / The Legend of Whitebeard” (11/2/96) – / The trio decides to leave when they feel ignored. / NO SYNOPSIS AVAILABLE.

“Three Ghosts and a Baby / I Wanna Be Rude / Leave it to Casper” (11/9/96) – Casper changes into a baby on James’ suggestion and is in danger of being stuck that way. / Spooky tries to prove he’s rude after sparing Poil’s feelings. / The ghosts pose as fleshies to escape a ghost hunter.

“A Christmas Peril / Ms. Banshee’s Holiday Hits / Good Morning Dr. Harvey / Fright Before Christmas” (12/21/96) – The trio fill in for the ghosts of Christmas. / An ad for Ms. Banshee’s holiday album. / The trio interrupts James and Casper’s singing session. / Kat tales the tell of how the trio spooked Santa.

“Hat Sick / Cancion De Olor / The Boo-Muda Triangle” (9/13/97) – Spooky bets Poil his hat Casper won’t make the scare team. / Stinkie sings to Kat about smells to help with her project. / Casper tries to save the Harveys’ cruise ship from the Bermuda Triangle.

“The Phantom of the Oprah / Stretch’s Information Tidbit / The Crying Game” (9/27/97) – NO SYNOPSIS AVAILABLE.

“Free Goldie / I’d Pick Your Nose / Birthday Boos” (10/4/97) – The trio decide to return Kat’s goldfish to the wild. / Poil sings about why she likes Spooky. / James enters a midlife crisis.

“Four Funerals and a Wedding / I Can Be Anything / Family Reunion” (2/6/98) – The trio try to ruin Ms. Banshee’s wedding. / Fatso tries to convince Ms. Banshee to date him in song. / James convinces the trio to attend the McFadden family reunion.

“Horrid Copy / I’m Nothing Without My Hat / Caspeer Pressure” (2/13/98) – / Spooky loses his hat and finds out he’s useless without it. / NO SYNOPSIS AVAILABLE.

“Politically Co-Wrecked Casper / Three Little Letters / Pen and Tell Her” (2/27/98) – / The trio sing to Casper after he fails his scaring test. / Fatso’s pen pal is coming to visit, but Fatso lied about himself in his letters to her.