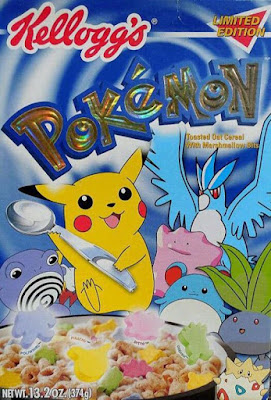 Pokémon began as a simple video game for Nintendo’s Game Boy, and ended up becoming a massive media empire. With dozens of games, waves and waves of merchandise, and thousands of episodes of an animated series, it has become the highest-grossing media franchise of all time. It was also credited with increasing the popularity of anime around the world, particularly in North America, leading to the style finding mainstream success. The core concept of the series had players controlling Pokémon trainers who captured various monsters and trained them to do battle with other trainers’ monsters. The goal was to capture all 150 monsters and evolve them into their ultimate forms.

Two years after the anime made its debut on American television, the beginnings of the media juggernaut were evident. Kellogg’s joined in on the licensing bonanza and crafted a cereal based around the franchise. Pokémon Cereal made its debut in May of 2000 as a limited edition. It was comprised of oat cereal pieces with marshmallows in the shape of Pikachu, Oddish, Ditto and Poliwhirl. The international version of the cereal featured a similar design and even used the same commercial with the voices dubbed over by local actors.

The back of the box had several designs. One was covered in a sea of various Pokémon with a challenge from the series’ original protagonist, Ash Ketchum, to help him find repeated versions of select Pokémon. Another version featured a cut-out picture frame. The international version came with an offer to send in “tokens” that could be cut out for chance to win one of 1000 Pokémon Stadium Battle-Top game kit. The offer included the 8 Pokémon tops being offered inside Kellogg’s cereals at the time, as well as a small stadium for them to “battle” in.

At the end of 1999, the second generation of Pokémon was introduced in the new games Pokémon Gold and Pokémon Silver, which would be finding their way to North America towards the end of 2000. The games gave 100 new Pokémon and new evolutions for previous Pokémon. To commemorate this, Kellogg’s updated their cereal a few months after its initial release. While the cereal itself remained the same, the marshmallow bits were now shaped as new Pokémon Pichu, Wobbuffet and Cleffa. The foil gimmick was also expanded to encompass the entire box instead of just the logo.