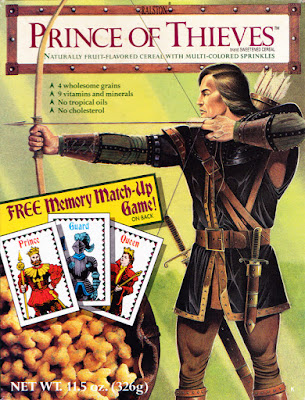 By now the story of Robin Hood is well-known. Robin of Locksley returned to England from the Crusades to discover that interim ruler Prince John had run roughshod over the citizenry with the aid of the crooked Sheriff of Nottingham. Locksley joined up with a group of misfits known as the Merry Men and set siege to John’s empire by robbing from the wealthy and giving it back to the poor.

The story has been the basis of countless retellings across various media. 1991’s version was Robin Hood: Prince of Thieves, written by Pen Densham and John Watson, directed by Kevin Reynolds, and starring Kevin Costner in the title role. Despite mixed reviews and negative criticism directed at the screenplay and Costner’s performance, the film went on to gross over $390.5 million; making it the second-highest grossing film of the year. It also featured the hit Bryan Adams song “(Everything I Do) I Do It For You”.

As part of the film’s promotional and merchandising campaign, Ralston acquired the rights to produce a cereal based on it. However, this cereal ended up being a bit of an oddity in the licensed cereal field. For starters, it lacked all Robin Hood branding was called simply Prince of Thieves Cereal. Instead of using a photo still of Costner from the film or even the movie’s poster, a Robin Hood-esque drawing was put on the box bearing no resemblance to the actor. An earlier prototype box had Robin looking even less like the film’s version with a more traditional outfit and accompanying hat. The cereal itself had fruit-flavored pieces shaped like arrows (although, they took on a more unfortunate shape in reality) with blue and green sprinkles.

Like the film, the cereal ended up selling well enough to remain on store shelves for two years. During that time, it came with several activities on its box. One featured cards that could be cut out for a memory matching game. Another had arrows that could be cut out of the side panel and “shot” at a target gallery drawn onto the back panel or at enemies to rescue a princess. Another saw the box able to be turned into a small castle complete with people to populate it. One box featured a board game on the back panel with a die that could be cut out of the side and folded together. At one time, a free movie poster was offered inside as well as a send-away offer for a pop-up atlas.