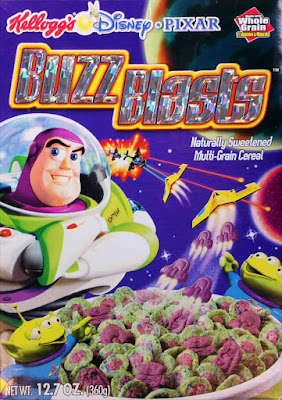 Toy Story became the first full-length completely computer-generated animated feature to hit theaters in 1995, pulling in an impressive box office, igniting interest in others studios for computer animation, and beginning the long-standing relationship between Disney and Pixar Studios. The film centered on a world in which toys came to life whenever people weren’t around. Woody (Tom Hanks), the pull-string cowboy doll that was once the favorite in a group of toys, found himself replaced by the newer, electronic talking Buzz Lightyear (Tim Allen) action figure. This led to many quarrels fueled by Woody’s jealousy until Woody came to accept Buzz and welcomed him into the group. Toy Story became a media franchise, spawning sequels, specials, books, games and even a Buzz Lightyear animated series.

In 2002, as part of a multi-year deal with Disney, Kellogg’s released three cereals based on Disney characters. One of them was Buzz Blasts cereal, centered on the Buzz character. The timing of this release was interesting as the animated series was currently in syndicated reruns at this time and the next Toy Story sequel was 8 years away.

Buzz Blasts featured cereal pieces in the shape of flying saucers, the Little Green Men toys featured in the movies and the cartoon, space ships and Buzz’s face. The pieces were done in Buzz’s purple and green color scheme, with all the pieces being purple and the flying saucers having an extra green ring as well as blue flecks. The cereal actually had a long life, running until 2005. The initial box featured a foil-stamped embossed logo and a game where you had to find the different space ship amongst three different fleets. At one point, a music CD with an exclusive song about Buzz was included as a premium. Another premium involved 3-D glasses to use with a new game on the back panel.