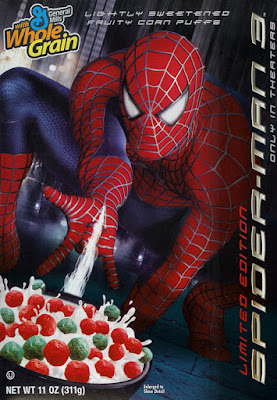 The final entry in what would become the Sam Raimi Spider-Man film trilogy came with 2007’s Spider-Man 3. Written by Raimi, his brother Ivan, and Alvin Sargent, the film became the victim of studio interference and more characters began being added than could adequately be managed in a single film. Along with Sandman (Thomas Haden Church), there was Harry Osborn’s (James Franco) transformation into a new kind of Green Goblin and Peter Parker’s (Tobey Maguire) new work rival Eddie Brock (Topher Grace) becoming the symbiotic villain Venom. Also thrown in was Gwen Stacy (Bryce Dallas Howard) to create a love-triangle for Peter and Mary Jane (Kirsten Dunst). Sony Pictures released the film on May 4, 2007, and despite less-than-favorable reviews when compared to the first two films, it ended up grossing a series high of $890.9 million; becoming the 3rd highest of the year and setting a worldwide single-day record of $104 million.

Replacing Kellogg’s as the food tie-in partner of the franchise, General Mills released Spider-Man 3 cereal. They chose to represent the cereal with red and blue ball puffs that had a fruity flavoring. The back of the box was taken up by a single large maze game set in a spider’s web. Like Kellogg’s, General Mills included tie-in premiums in their other cereals in the form of squirt toys in the shape of Spidey and the film’s three villains.