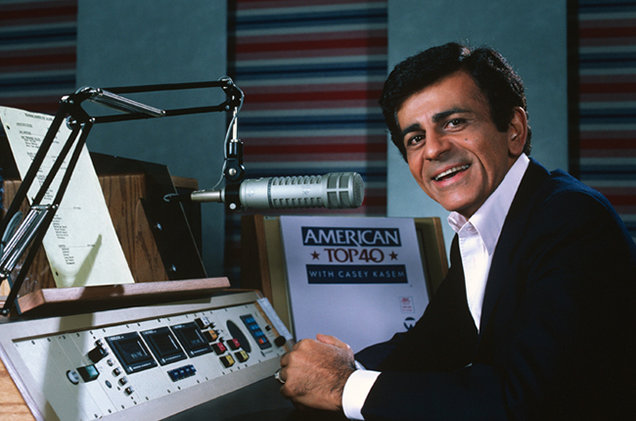 Born Kemal Amin “Casey” Kasem, he was inspired by the radio show Make Believe Ballroom to pursue a career in radio. His first job was covering sports at Northwestern High School in Detroit before voicing children characters on radio shows run by Wayne State University. In 1952, he was drafted into the Army and sent to Korea where he worked as a DJ/announcer on the Armed Forces Radio Korea Network. Following the war, Kasem returned to Michigan where he began his professional radio career; eventually winding up in California. While at KEWB in Oakland, Kasem served as both the music director and on-air personality. Inspired by a magazine he found in the trash, he created a show that mixed biographical tidbits about the artists and songs he played. Kasem’s career took off in 1963, starring in several low-budget movies and radio dramas, as well as hosting “dance hops” on local television. Those televised appearances attracted Dick Clark, who hired him as co-host of Shebang in 1964, which led to his appearing on other programs. Kasem’s vocal talents ended up driving him towards voice acting, which began with voicing Robin the Boy Wonder for Filmation’s The Adventures of Batman animated series. His breakout, and most well-known role was that of Shaggy Rogers in Scooby-Doo, Where Are You! for Hanna-Barbera. He would reprise the role across several series and made-for-TV movies, briefly quitting the role in a dispute over Shaggy being featured in a Burger King commercial (Kasem was vegan and requested Shaggy be at least vegetarian), up until his eventual retirement from voice acting. Kasem also reprised the role of Robin for Hanna-Barbera’s Super Friends franchise. In 1970, Kasem, Don Bustany, Tom Rounds and Ron Jacobs launched the weekly 3-hour radio program American Top 40. The show would count down the week’s 40 biggest hits—according to the Billboard Hot 100 weekly chart—in ascending order to the most popular song. Like his earlier radio show, Kasem included biographical information, trivia, flashbacks, long-distance dedication segments and often used the answer to a trivia question he posed as a hook to keep people tuned in over a commercial break. He would play himself hosting the countdown in a voice cameo role in the 1984 film Ghostbusters. In 1983, Kasem helped found the American Video Awards in the hopes that it would become the Oscars of music videos; but the show only lasted until 1987 (MTV would launch their own awards show in 1984, which is still going as of this writing). In 1988, Kasem left American Top 40 over a contract dispute with ABC Radio Network and started Casey’s Top 40 with Westwood One, as well as Casey’s Hot 20 and Casey’s Countdown. The shows were essentially the same despite their varying lengths, except he used the Radio & Records’ chart. However, when Top 40 was cancelled in 1995, he regained the rights in 1997 and relaunched the program the following year with Premiere Radio Networks, along with two spin-offs both named American Top 20 (one of them eventually being cut down to 10). Along with further television guest-starring roles and various commercials, Kasaem starred as Mark in Battle of the Planets and played several roles in Transformers; eventually leaving the latter when he felt it contained offensive caricatures of Arab countries. From 1989-98, he hosted Nick at Nite’s New Year’s Eve countdown of the top reruns of the year. Kasem retired from Top 40 in 2004, with Ryan Seacrest taking over the show, and in 2009, Premiere ended its partnership with Kasem, cancelling American Top 20 and Top 10. 2009 also found him retiring from regular voice acting; however, he did reprise the role of Shaggy for “The Official BBC Children in Need Medley” uncredited, and Shaggy’s father, Colton Rogers, in Scooby-Doo! Mystery Incorporated, also uncredited. In 2013, Kasem was diagnosed with Lewy body dementia, which left him unable to speak in his final months. He died in 2014. In 1981, Kasem was given a star on the Hollywood Walk of Fame. In 1985, he was inducted into the Nation Association of Broadcasters Hall of Fame, and the National Radio Hall of Fame in 1992. He also received the Radio Hall of Fame’s first lifetime achievement award in 1997. In 2003, he was awarded the Radio Icon award at the Radio Music Awards.