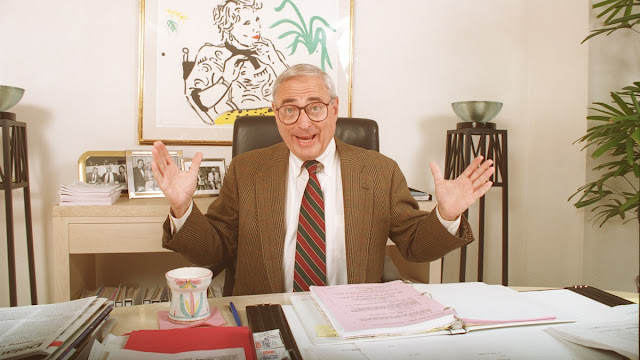 Silverman landed his first job at WGN-TV in Chicago due to his 406-page master’s thesis that analyzed 10 years of ABC network programming. He soon returned to his native New York at WPIX, and then at CBS where he was put in charge of the network’s daytime programming. Part of his efforts was to put some focus on the Saturday morning schedule and make it as strong as any weekday one. He gave Filmation their first series job, commissioning The New Adventures of Superman, and filled up the morning schedule with action-oriented cartoons in the hopes of mirroring the popularity of ABC’s live-action Batman. It proved equally successful, and soon the other networks were copying CBS in the following seasons. Unfortunately, that success drew the attention that lead to the creation of Action for Children’s Television, a grassroots group dedicated to “cleaning up” content geared towards children and providing more educational fare. Silverman adapted and shifted the schedule to a comedy-oriented format. The unbridled success of Filmation’s The Archie Show led Silverman to seek similar programming, and steered Hanna-Barbera towards the production of Scooby-Doo, Where Are You! For the rest of CBS, Silverman eliminated all of their country-oriented programs (known as the “rural purge”) and commissioned hits such as All in the Family, M*A*S*H, Cannon, Barnaby Jones and others. He also had the network abandon the practice of video tape wiping, preserving all of their productions. In 1975, Silverman was named president of ABC Entertainment and proceeded to work his magic on that network; propelling them from last to first place in the ratings with shows such as The Bionic Woman, Charlie’s Angels, Three’s Company, Soap, Fantasy Island, Roots and helping to breathe new life into their failing soap operas. He also had to help save Happy Days from the brink of cancellation where he had put it while at CBS. Once CBS’ option for Scooby-Doo ran out, he commissioned new shows over on his new network while further nurturing a long relationship with Hanna-Barbera. Unfortunately, one of his few failures was Filmation’s Uncle Croc’s Block, which bombed so spectacularly that Silverman ended his association with the studio and gave more work to Hanna-Barbera. Ironically, all that extra work left Silverman feeling that Hanna-Barbera was being stretched too thin creatively, so he encouraged former Hanna-Barbera employees Joe Ruby and Ken Spears to form their own production company to offer some competition and alleviate that workload with the hopes that Hanna-Barbera would return to form. Looking for a new challenge, Silverman left ABC in 1978 to become President and CEO of NBC, earning him the rare distinction of being the head of all three major networks. Unfortunately, his brief tenure there proved to be disastrous as his failures largely outnumbered his successes. The drama Supertrain, the most expensive TV series produced at the time, nearly bankrupted the network when it flopped. In contrast, The Smurfs ended up becoming a massive success and running and impressive 9 seasons; long after Silverman left the network. In 1981, Silverman formed his own production company, The Fred Silverman Company, and produced the hit series Matlock, Jake and the Fatman, In the Heat of the Night, Father Dowling Mysteries, Diagnosis Murder and the Perry Mason TV movies. They also produced the cartoons Pandamonium, Meatballs and Spaghetti, The Mighty Orbots and Piggsburg Pigs. Following ABC’s success with Who Wants to be a Millionaire, Silverman executive produced a revival of the quiz show Twenty One for NBC, and produced a series of murder mystery telepics. In 1995, he was awarded the Women in Film Lucy Award for enhancing the perception of women through television and was inducted into the Academy of Television Arts and Sciences Hall of Fame in 1999. Silverman spent his later years teaching courses on television at USC. Silverman died at the start of 2020 from cancer.

(Note: Only selected filmography present. As the head of respective networks, he had some kind of involvement with all of their output during his tenure.)
Scooby-Doo, Where Are You!
Pandamonium
Meatballs and Spaghetti
The Mighty Orbots
Piggsburg Pigs!
Posted by Chris Buchner at 8:01 AM