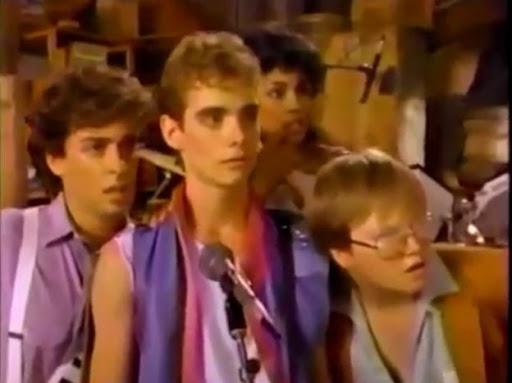 Kidd Video, created by Jean Chalopin, Andy Heyward, Haim Saban and Shuki Levy, was named for the band who was named for their frontman (how’s that for some inception?). Kidd (Bryan Scott) was the lead singer, guitarist and keyboard player for the band. While being a generally good friend who cared about his bandmates, there were times his ego could inflate out of control and he’d need to be brought back to Earth. Carla (Gabriele Bennett) was the band’s drummer and a bit of a party girl, always looking for a good time and into keeping fit. She often served as the voice of reason and frequently injected Spanish words when she spoke. Ash (Steve Alterman) alternated between keyboards (particularly a small, collapsible one called the Groove Machine) and bass and saxophone. Despite being the biggest music lover in the group, his lyrics were always terrible. He was also the token coward, often needing his friends’ support in dangerous situations to keep moving forward. Whiz (Robbie Rist) played guitar and keyboard and also sang lead vocals from time to time. He was the resident genius, capable of inventing and building almost anything. He was also a little selfish and short-tempered, often angered by his friends’ seeming inability to take certain things seriously. 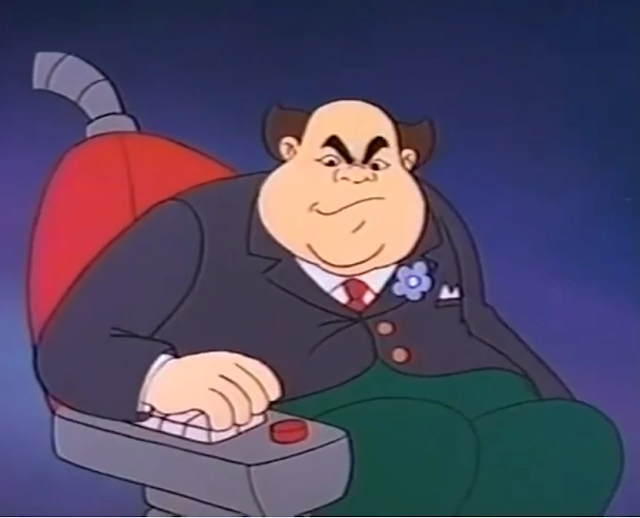 As laid out in the show’s intro, while the band was rehearsing in a warehouse, an animated despot named Master Blaster (seemingly an evil music executive, voiced by Peter Renaday) appeared in a mirror in a floating chair. He transported the band into an alternate animated dimension known as The Flipside where music was a powerful commodity. He sought to steal their sound and use it to strengthen his hold over the realm by either conquering it or controlling its music (on some occasions, he’d just settle for riches galore). Aiding him was his trio of incompetent henchmen and lousy band known as the Copy Cats: literal humanoid felines comprised of the vain and whiny She-Lion (Susan Silo); the constantly-hungry Fat Cat (Marshall Efron); and the lazy and mellow Kool Kitty (Robert Towers). Master Blaster operated out of and travelled around in a flying fortress that resembled a juke box. It’s interesting to note that while all the characters wore the same clothing in each episode, Master Blaster’s suit was given different color combinations each time.
The band got their own help in the form of Glitter (Cathy Cavadini), a tiny fairy that gained super strength for a brief time whenever she sneezed, who rescued them from Master Blaster when they arrived and stayed with them. Together, they traveled around The Flipside as the band searched for a way to get home while protecting the unusual citizenry (one whole town was comprised of vegetable people that grew instruments, for instance) from Master Blaster’s machinations, as well as freeing the other performing artists he captured. They did so in the Kiddmobile, a large hovercraft that doubled as a mobile home for the band. In the real world, it was actually Whiz’s 1984 Subaru Brat that was also sucked in with them and their instruments and took on this new form.
Kidd Video debuted on NBC on September 8, 1984. The series featured a blend of live-action and animation, with the actors portraying both themselves in the real world and providing their voices in The Flipside. Each episode was largely a showcase for popular music of the day. A Top 40 hit was played during at least one scene, lip-synched by the Copy Cats via Master Blaster’s captives, or somehow incorporated as an element of the story. Additionally, an excuse was always made to show a minute-long snippet of a music video. The entire season was written and story edited by Jim Carlson and Terrence McDonnell, and the characters were designed by Tim Gula and Barbara Pizinger. Animation duties were handled by Cuckoo’s Nest Studio. The visual style for the show was heavily influenced by the videos airing on MTV and album artwork of the era (and, as one artist would claim, lots and lots of drugs).

The show was a hit and was renewed for a second season. Several changes were made; most notably the alteration of the characters’ animated forms to closer resemble their actors. Carla’s skin was made lighter in complexion and her tendency to drop Spanish words was removed. Glitter was given slightly longer hair and a more pixie-ish face. Whiz was far less homesick than he had been in the previous season, and invented an artificially intelligent toolbox robot named Toolbot (Hal Rayle) that served as his sidekick and friend. He also gained a vest over his shirt. And speaking of vests, Kidd’s became a darker blue. This season was written by Dianne Dixon, Michael Maurer, Deborah Shelton and Levy, with Tracy Mays serving as story editor. The night before the season premiere, the live cast appeared on the preview special Back to Next Saturday Morning to promote the show.