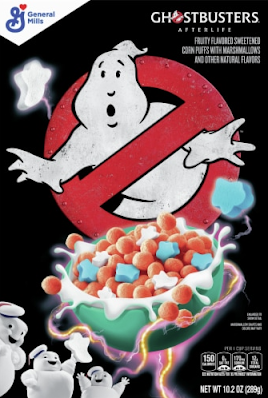 GHOSTBUSTERS: AFTERLIFE CEREAL
General Mills
Then, news came of a new film connected to the original ones directed by Jason Reitman, the son of original director Ivan Reitman who would serve as a producer. Similarly to Hellbent, Ghostbusters: Afterlife would focus on a new group of kids that become embroiled in the world of supernatural after two of them moved into their grandfather’s old house in the Midwest and discovered a crop of old Ghostbusters gear. The film stars Mckenna Grace as Phoebe, Finn Wolfhard as her brother Trevor, Carrie Coon as their mother Callie, Paul Rudd as Phoebe’s Ghostbusters-knowledgeable teacher Mr. Grooberson, Logan Kim as Phoebe’s classmate Podcast and Celeste O’Connor as Trevor’s classmate Lucky. The surviving original cast sans Moranis (who came out of retirement too late to be included) make appearances in cameo roles. Originally meant to released on July 10, 2020, it was delayed several times due to the COVID-19 pandemic before getting a final release date of November 19, 2021.
As part of the marketing promotion for the film, General Mills introduced a limited-edition cereal based on it that hit store shelves around April and May of 2021 in a regular and family size. This would be the first time a Ghostbusters-themed cereal has been seen in grocery stores since Ralston’s version ended production some decades prior (however, Funko did release two as part of their POP! Cereal Series in 2019). As the movie ties into the prior films, this cereal pays homage to the original with the inclusion of ghost-shaped marshmallows and red coloring for the fruity-flavored cereal pieces; however, the “no” logo was foregone in favor of generic rounded puffs. Additionally, there were blue marshmallows meant to represent the film’s new ghost, Muncher.
The box for Ghostbusters: Afterlife Cereal featured elements representative of the new film decorating it. The primary no-ghost logo was the weathered and bolted logo used in the film’s marketing, and the Mini-Pufts that made their debut in a teaser are seen below the cereal bowl being blasted by a proton stream, as well as on the side and back of the box. In the original promo images for the box, the Mini-Pufts were absent, the stream was purple, and the Muncher marshmallows were colored green; a further homage to the original’s Slimer marshmallows. The back also featured Muncher, neon outlines of the equipment, Mr. Stay Puft and a terror dog, and trivia questions.
Posted by Chris Buchner at 8:01 AM