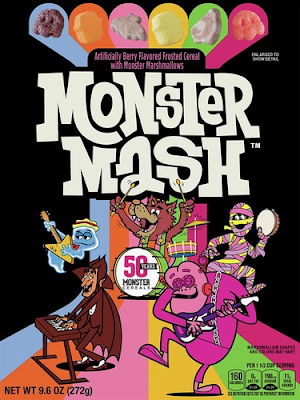 MONSTER MASH CEREAL
General Mills
As the name would imply, Monster Mash cereal was a mash-up; albeit not a complete one. Debuting in August of 2021, it featured the Franken-Berry and Boo Berry ghost cereal pieces together with the generic monster marshmallows once featured in Yummy Mummy cereal, and the bat, lightning bolt, blob and swirled ghost marshmallows from Count Chocula. Interestingly enough, the swirled ghost was introduced with the “Monster Mash” back in 1996. While Chocula’s taste was nowhere to be found, Fruit Brute ended up getting short changed and seriously underrepresented.
To go along with the cereal’s name, the monsters were featured as part of a band on the packaging and in the marketing campaign. A QR code took consumers to a special Monster Mash website which hosted two links: a behind-the-scenes mockumentary of the monsters reuniting their band to record a new version of “Monster Mash”, and the recording itself. Betty Crocker made their own contribution to the celebration with special Monster Mash fruit snacks 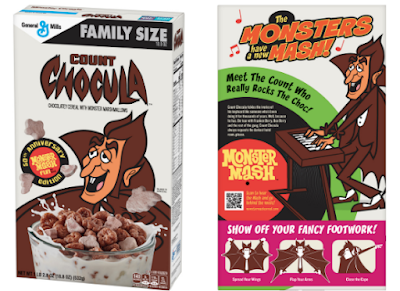 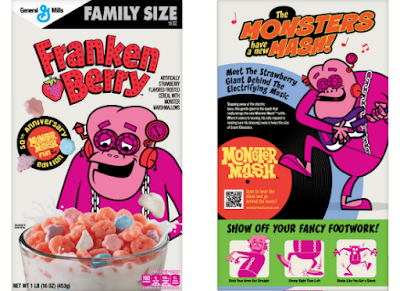 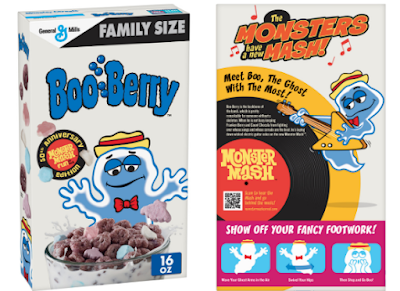 Along with Monster Mash cereal, the regular three monster cereals also received their annual releases. Returning to the retro packaging, they were tied into Monster Mash by featuring 50th anniversary logos on their fronts and Chocula, Franken-Berry and Boo Berry playing their respective instruments on the back, a selection of three character-specific dance moves, and the QR code leading to the site.
Posted by Chris Buchner at 8:01 AM