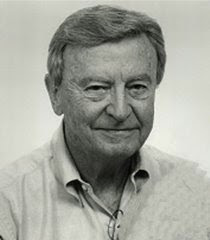 John Stephenson died on Friday, May 15th, at the age of 91. You can read about it here.

Stephenson had a long career, especially on Saturdays and usually in Hanna-Barbera productions. He was probably best known for his portrayal of Mr. Slate, amongst many other smaller characters, and Doggie Daddy throughout The Flintstones and various entries of the Yogi Bear franchises, and various guest voices in episodes of Scooby-Doo.

His starring roles included Dr. Benton Quest and others on Johnny Quest, Chief Winchley on The Secret Squirrel Show and The Atom Ant/Secret Squirrel Show, Fariik and Bakaar on The Banana Splits Adventure Hour, Luke and Blubber Bear on Wacky Races, Eustace P. Peevly on Help!...It's the Hair Bear Bunch!, Captain Mike Murphy on Sealab 2020, Mr. Socrates on Butch Cassidy and the Sundance Kids, Doggie Daddy, Hardy Har Har and others on Yogi's Gang, Hadji on Jeannie, Reuben Kinkaid on Partridge Family 2200 AD, Tom, Jerry and Spike on The New Tom & Jerry Show, Mildew Wolf, Doggie Daddy, Dread Baron and The Great Fondoo on Laff-A-Lympics, Captain Snerdley and General Blowhard on Galaxy Goof-Ups and Yogi's Space Race, Harry Scary and the Commander on Casper and the Angles, Chief Quimby on an episode of Inspector Gadget (1983), Beef Bonk on Galaxy High School, Doc, Philo and Grunge on Fraggle Rock: the Animated Series, and Professor X on Pryde of the X-Men.