There have been several heroines in Marvel Comics that have donned the mantle of Spider-Woman. But, without Jessica Drew, there would have been none (at least as far as Marvel was concerned).

Then-publisher Stan Lee realized that the name was fair game for anyone who wanted to use it. In 1964, when Marvel debuted the character of Wonder Man in the pages of The Avengers, rival publisher DC Comics sued them due to the fact they owned Wonder Woman, resulting in that character being dropped from the books for a time. However, in 1976, DC would go on to introduce their character Power Girl while Marvel had already had a Power Man in play since 1972. Wanting to ensure the trademark for any kind of Spider-Woman would be Marvel’s, Lee rushed production of a character with the name. Although, it should be noted that a Marvel book did feature a character called Spider-Woman in Spidey Super Stories #11 (1975). That version was a non-powered character named Valerie the Librarian (Hattie Winston) from the children’s show The Electric Company.

Fleshed out by Archie Goodwin and designed by Marie Severin, the new Spider-Woman made her debut in Marvel Spotlight #32 (1977). Only intended to be a one-off, the issue sold incredibly well and Marv Wolfman was tasked with bringing the character into her own series. Goodwin had envisioned her to be an actual spider evolved into a human. Feeling that concept too implausible for 1970s audiences, Wolfman retconned Goodwin’s origin to be false memories implanted by the terrorist group Hydra. Instead, she became Jessica Drew (named after Wolfman’s daughter and the fictional detective Nancy Drew) whose scientist parents worked in a lab at Mount Wundagore with their partner, Herbert Wyndham, who would go on to become the High Evolutionary. When she was exposed to lethal doses of uranium over time, Jessica’s father injected her with a serum based on irradiated spider blood and is placed in a genetic accelerator to allow the serum proper incubation time.

Unlike the comics, Jessica lived a relatively normal life as the editor of Justice Magazine. Her supporting cast included photographer Jeff Hunt (Bruce Miller), a cowardly braggart who fancied himself the heroic-type, and her teenaged nephew, Billy (Bryan Scott). While not exactly following the macabre setting Wolfman established, Jessica did encounter demons including Dr. Strange villain Dormammu, ghostly Vikings, Dracula and the other Universal Monsters, and a variety of aliens. Then-Spider-Man villain Kingpin made an appearance as well, although not quite in his capacity as a kingpin of crime. Spider-Man made a couple of appearances on the show with Paul Soles reprising the role from his 1967 series, something which the comic series tried to avoid for as long as they could in order to allow Jessica to stand apart.

Jessica made other appearances on television in the form of a costume worn by the fire-powered Firestar (Kathy Garver) on an episode of Spider-Man and his Amazing Friends and in a live-action cameo appearance on the short-lived comedy, Once a Hero. In the comics, she was relegated to a number of guest appearances and a status as a Wolverine supporting character in the early issues of his first ongoing series, working as a non-costumed private eye. It wouldn’t be until 2005 that Jessica returned as Spider-Woman in the pages of New Avengers that the character gained new exposure. After a short-lived 2009 revival series that later became a motion comic, Jessica returned to her own series in 2015 (complete with a new costume) spinning out of the “Spider-Verse” event. 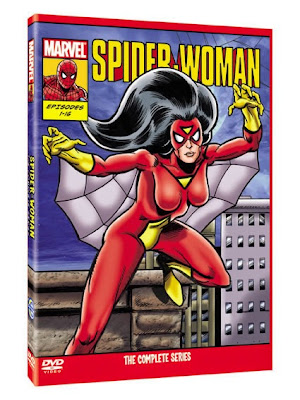