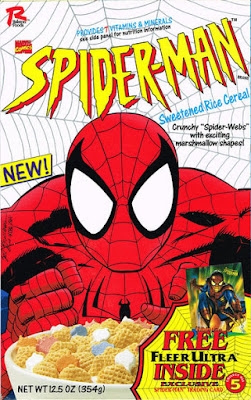 When the new FOX Kids series Spider-Man: the Animated Series debuted in February of 1995, it became an instant ratings success. Ralston, whose business model was built on licensed cereals, sought to take advantage of Spidey’s success and licensed the rights to produce a cereal based on the show. They promoted it heavily not only on television, but also in comic book advertisements.

Released that August, Spider-Man Cereal featured the same rice pieces that represented webs and four different marshmallow shapes. The marshmallows were meant to resemble the camera of Spidey’s secret identity Peter Parker as well as one of Spidey’s spider-tracers, the Hobgoblin’s pumpkin bomb, and the Kingpin, the evil mastermind for most of the cartoon. Despite all the work Ralston put into marketing the cereal, it was actually a reworking of not one, but two of their prior cereal. The rice pieces were the same ones used in their Chex cereals, which were combined with marshmallows for their Teenage Mutant Ninja Turtles Cereal that had been discontinued a couple of years prior.

The cereal came with two premiums. On the back of every box was a “Spidey-Store.” Items shown could be purchased with an accompanying order form and proofs of purchase. Products included a pencil case, bowl, two comic books, a wall-cling and the Spider-Man Cartoon Maker CD-ROM. Each box also came with one of five special cards that were part of the 1995 Fleer Ultra Spider-Man set. The cards featured the artwork from the ClearChrome chase set with the backs of the corresponding regular card for the character featured.

Posted by Chris Buchner at 8:30 PM