THE HISTORY OF THE FANTASTIC FOUR 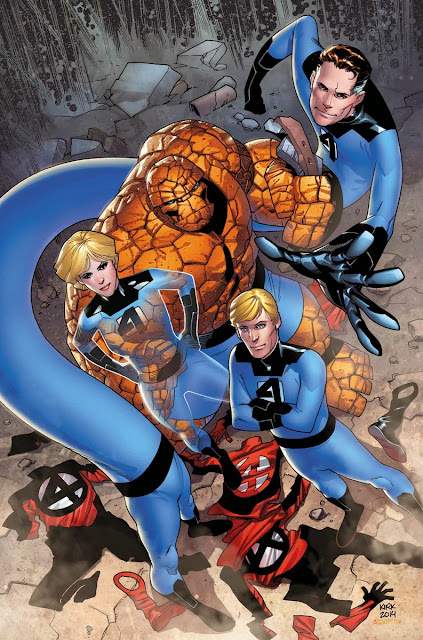 Rival publisher DC Comics found a hit with their new Justice League of America comic. Marvel Comics publisher Martin Goodman saw that success and wanted to bring that to his own company. He tasked the creation of a new super team to his star creators Stan Lee and Jack Kirby. Kirby drew up the pages which Lee later added dialogue to, a collaboration that proved so fruitful they proceeded to do it with all their titles from that point on. This style of creating became known as The Marvel Method, which, while created as a way for Lee to handle his incredible workload of books to write amongst other duties, became the standard practice for Marvel within the year. But, more than how they made the books, the other thing born that time was The Fantastic Four.

The team was created when genius scientist Reed Richards took his fiancé, Sue Storm, her brother, Johnny, and his best friend, Benjamin J. Grimm, on an expedition into space. Their poorly-shielded rocket was bombarded by cosmic rays, altering the foursome on a genetic level. Reed became able to stretch and shape his body like it was made of rubber, taking the name Mr. Fantastic. Sue was able to turn invisible and project a force field with both offensive and defensive capabilities, becoming the Invisible Girl (later Woman). Impetuous young Johnny gained an ability to match his temperament as he gained the ability to cover his entire body with and project flame, as well as fly as The Human Torch. Ben was changed the most, as his entire body became covered in orange rock, turning him into the super-strong Thing.

Thing’s mutation in particular was an earmark of the major difference between FF and other super hero comics at the time. Lee had strove to create heroes relatable to ordinary people; heroes with flaws and foibles that made them less than perfect god-like beings. That was shown through the dysfunctional family dynamic the team exhibited, with Reed constantly neglecting Sue for his scientific experiments, Johnny gaining a swell head through all the adoration and media attention the team received to the point of causing him to recklessly fall into trouble, and Thing’s constant depression over his inability to appear as a normal human like his friends (but don’t worry, folks: over time he gets used to being the “idol o’ millions, the ever-lovin’ blue-eyed Thing”).

Further setting the FF apart from those that came before was their complete lack of superheroic touches. While having codenames, their identities were publicly known. In fact, they wouldn’t receive costumes until the third issue of their series. Kirby gave them a minimal of design, taking a cue from his earlier work on DC’s Challengers of the Unknown, and within the books it was said the suits were made of unstable molecules which allowed them to mimic their wearer’s abilities without damage.

The FF was a success, changing Lee’s mind about leaving the comics field as he had grown increasingly discontent. Over the next several years, the FF had gone on adventures that took them around the world, into the far reaches of space, and even to alternate dimensions. In those pages, Lee and Kirby re-introduced Marvel’s first superhero, Namor, the Sub-Mariner, to Silver Age audiences, as well as their arch foe Dr. Doom, the world devouring Galactus and his herald the Silver Surfer, the secret race of Inhumans, and even the African hero Black Panther. The team had also undergone several brief roster changes, featuring Inhuman royalty Medusa and Crystal, She-Hulk, Luke Cage, Nova (Frankie Raye), Ms. Marvel/She-Thing and even Spider-Man. But, regardless, the original Foursome always managed to find their way back together.

Before Kirby left Marvel in the 1970s, he and Lee had completed 102 issues together (plus one unfinished one that was partially published with new material as #108, and then in its original form as Fantastic Four: The Lost Adventure in 2008), becoming the longest creative run at Marvel until surpassed by Brian Michael Bendis and Mark Bagley on Ultimate Spider-Man. With over 600 issues across several volumes, the FF remained a fixture of Marvel for decades. So, it was only natural for them to make the jump from the page to the small screen…
Posted by Chris Buchner at 8:15 AM