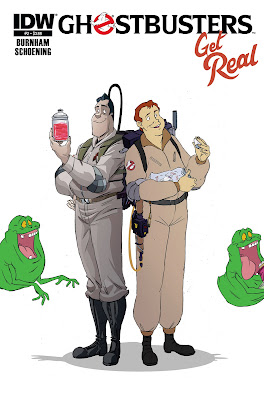 As the two sets of Ghostbusters attempt to figure out why they were targeted by Proteus, Proteus unleashes two hounds to try and find where the Real team wound up in order to deal with them properly.

GRADE: A. A lot of talking going on in this issue, but none of it was ever boring. Erik Burnham has managed to make pseudo-science interesting to read as the two teams of ‘busters interact with each other. This issue opened with a cameo scene by the Extreme Ghostbusters in one of the first alternate universes Proteus investigated looking for the Real team, which is sure to please a lot of fans of that short-lived follow-up series to the original cartoon.

But, probably the best part in the issue was the two-page spread featuring alternate versions of the guys in various universes. Amongst them were the original designs and later Slimer! designs for the Real team, several versions of how the team appeared in various video games over the years, the Peoplebusters from the “Flip Side” episode of Real, the Filmation version, the anime version from Tokyo ESP episode 3, a shot from the “Ghost Wrestlers” episode of Hulk Hogan’s Rock ‘n’ Wrestling, and Dan Aykroyd’s original concept designs.

As always, Dan Schoening’s artwork was spot-on, making every character seem like it jumped off the screen and into the comic. For the hardcore fans paying attention, scenes were littered with references to the various facets of the franchise making fun little Easter eggs to find. And without Luis Delgado’s excellent coloring to set the tone for each scene, none of that would matter. The only negative was Delgado made a bit of a goof and colored in Real Ray’s jumpsuit with Real Peter’s colors, but you could probably write that off as an acknowledgement of the frequent bloopers found in the cartoon episodes.

This issue came with 2 covers, seen below. The Subscription Cover was based on EC's Vault of Horror #25, part of a theme of classic covers re-imagined for that month. What did you think of this issue? Let us know in the comments or on our Facebook page. 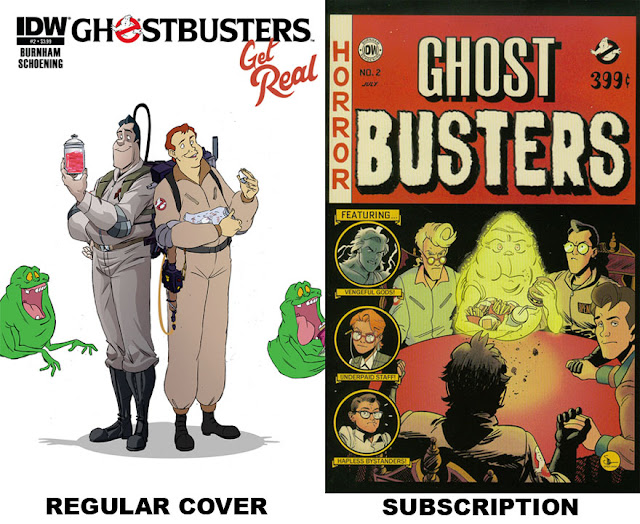